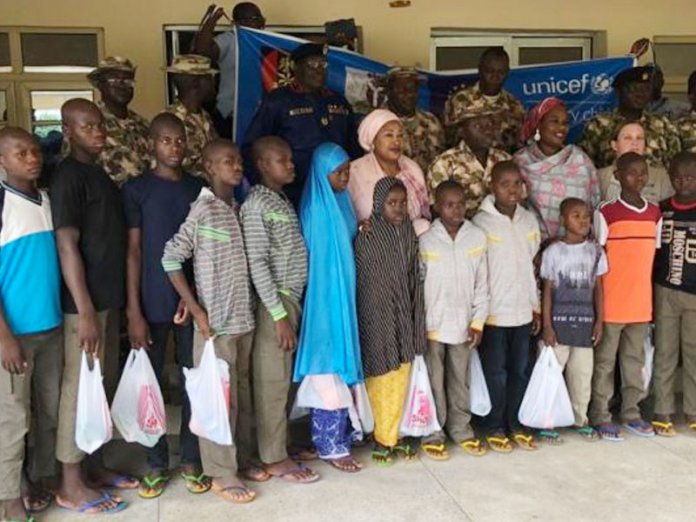 A total of 25 children, 23 boys and two girls were released by the military to the United Nations Children’s Fund (UNICEF) and officials of Borno State Government.

The children, who were said to have had link with Boko Haram terrorists, had been under the military administrative custody.

They were, however, released Thursday after they have been cleared of suspected ties with armed militia.

The latest military action brought the number of children so far released this year to 44.

The children’s age ranges from 8 to 15, and were mostly abducted by Boko Haram insurgents during attacks on their communities and were forced to work for their abductors in different supportive roles, said the military.

Theatre Commander, Operation Lafiya Dole, Maj. Gen. Olusegun Adeniyi, while handing over the children, noted that some of them escaped from their abductors and found their way to troop’s locations.

According to him, “Children associated with insurgency are commonly subjected to abuse and most of them witnessed killing and sexual violence. Regardless of how they are recruited and the roles they played, their part often bears serious implications to their physical and emotional well-being.

“Therefore, their rehabilitation and reintegration into civilian life is an essential part of our effort in partnership with other stakeholders to help them rebuild their lives.

“The children seated here today have been adequately profiled and their roles with Boko Haram ascertained as supportive and non-violent. Some of them are children whose parents were arrested for terrorist offences and there is no justification to keep them in detention alongside their parents.”

The UNICEF Nigeria Acting Representative, Pernille Ironside, said: “These are children taken away from their families and communities, deprived of their childhood, education, health-care, and of the chance to grow up in a safe and enabling environment. UNICEF will continue working to ensure that all conflict affected children are reunited with their families; have hope of fulfilling their dreams and their human rights.”

She said the children who are now handed over to the Borno State Ministry of Women Affairs and Social Development would be kept at a UNICEF supported Transit Centre, whilst efforts to reunite them with their families and reintegrate them back to their communities are underway.

Ironside said: “They will access medical and psychosocial support, education, vocational training and informal apprenticeships, and opportunities to improve their livelihoods.

“We have made progress, but we would like to see all children suspected of involvement with armed groups, transferred out of military custody to the care of the relevant local authorities as quickly as possible to facilitate their return to their families and communities, spending minimal, if any, time in detention.

“As we commemorate the 30th Anniversary of the Convention of the Rights of the Child this year, we must collectively commit to do more for the protection, well-being and development of children in Nigeria, including by ensuring that they are not recruited or used in conflicts in the first place.”

The Borno State Commissioner of Women Affairs and Social Development, Hon. Zuwaira Gambo, who received the children from the military at a ceremony, said they would be given proper care and allow them to go back to school.

Since 2016, a total of 2,499 people including 1,627 children have been cleared of association with non-state armed groups. UNICEF and partners continue to provide age and gender appropriate community-based reintegration support services to all affected children and other vulnerable children in communities that are at risk of recruitment by armed groups.