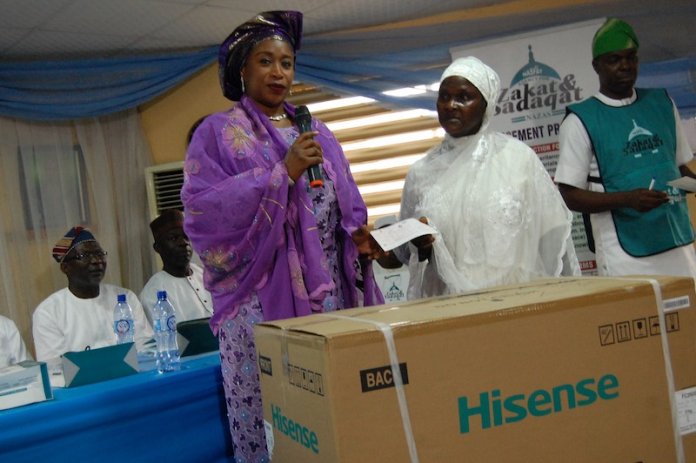 Recently, NASFAT Agency for ZAKAT and SADAQAT, a non-governmental organisation established with the aim of giving succor to the needy in the society, recently empowered 279 underprivileged persons with cash gifts and working tools valued at over N20 million, Sunday Ehigiator reports

Hours before 12 pm which was pegged for the commencement of the empowerment programme, several physically challenged and under privileged had already trooped into the Nigerian Institute of Town Planners, Lagos state chapter at Ikeja; venue for the disbursement.

Prior to the day, they had been carefully screened and selected according to the urgency of their needs. For the graced 279 beneficiaries, it was indeed a life changing experience. The able men and women, who have seen the other side of life and must have lost hope, were visibly praying fervently for the agency and their heart desires being met.

On their faces were uncertainty, anxiety, anguish, frustration, and hope, all mixed together as they clung to their walking sticks, pathfinders, and wheelchairs despite the unfriendly weather.

On Sunday September 1, 2019, NASFAT Agency for ZAKAT and SADAQAT (NAZAS), a humanitarian organisation again reached out to over 279 less-privileged through its quarterly disbursement exercise. It was the sixth time in six years of its existence that NAZAS would be touching lives within the society.

Launched in June 2014, the agency was able to achieve all of these through the support and commitment of donors and kind hearted Nigerians who have volunteered to part with some of their yearly earnings in form of Zakat.

This year, the event opened with an annual general meeting headed by the agency’s Chairman Board of Director, Mr. Niyi Yusuf. The purpose was to give steward of their activities in the past years. Yusuf harped on the supports received by the agency through Zakat from its members, and other donations received from well meaning Nigerians over the last one year, and how they were expended.

He likewise rolled out some of the success stories recorded by the agency over the last one year. Yusuf said NAZAS started five years ago, and has since mobilised more than N174 million from which over 676 indigents had benefited through both Ramadan and Muharram (first month of the Islamic year) public disbursements and other routine and emergency disbursements.

“This was made possible through regular payment of Zakat and Sadaqat by you and donors. The clamour for us to up our game by moving from regular below N40 million marks in fund receipts was achieved this year as we finally crossed the N40 million line in 2018 and we have already crossed the N55 million threshold in the ongoing 2019 and hoping to cross the N60 million mark.

“Health is wealth. I am pleased to report that the board approved in 2018 that we institute a health insurance package for Imams and Missioners (both NASFAT and non-NASFAT) to promote the health and well-being of the Imams and their immediate families. In 2019, we have since enrolled the initial set of 12 Imams and Missioners with the Lagos state Health Management Authority.

“Working with the Lagos State league of Imams and Alfas, and with your financial support, we hope to enroll more Imams and Missioners in the period ahead.”

After the AGM came the moment the beneficiaries have all been awaiting. Ms Mariam Amidu, alongside 37 others, enjoyed N1.88 million set aside for education support and scholarship for the poor and needy.

Speaking with THISDAY, Mariam, a widow’s daughter, showered praises on NAZAS. According to her, “I can’t wait to share this testimony with my mother. I am 22 years old and a student of University of Lagos. I didn’t grow up to know my father, and paying school fees has always been a problem for me and my siblings.

“With this scholarship, I can now pay more attention to my studies and achieve my dreams of being an accountant. May the almighty Allah continue to bless all those who have sacrificed their hard earned money for people like me to go to school. Indeed, I am more than grateful to NAZAS.”

Mr. Jubril Jimoh, alongside 14 others with deteriorating health conditions, amidst tears, shared N4.862 million among themselves to take care of their health. And six others got N510, 000 to repay their debts.

Speaking with THISDAY, Jimoh who obviously couldn’t fight back his tears said, “It is been over four years I have been on search for help on my health issue after I exhausted all I had on me managing the ailment. I was diagnosed with acute diabetics, and have initially spent over N420, 000 managing it, before I was slammed with another N400,000 bill again. But I had no money anymore hence I resorted to call for help.

“Luck finally shone on me through a friend’s wife who came to check on me in the hospital and suggested I reach out to NASFAT. I did, and surprisingly, they have come to my aid today. I am so grateful to them and to Allah the most benevolent. I am more than happy.”

12 NAZAS Imams and Missionaries, alongside one of their wives and any of four of their children were placed under the recently launched Lagos State health insurance scheme altogether valued at N400, 000 per year, while 148 petty traders, mostly consisting of physically challenged, got empowered with money, work tools such as sewing machines, refrigerators etc, altogether worth N14.2 million; in a bid to alleviate them from poverty.

One of the empowerment beneficiaries, Mrs. Silifat Daramola, who broke down in tears after receiving a deep freezer and a cash gift to support her trade said to THISDAY that, “I didn’t entirely believe when I got informed that I would be a part of those benefiting from Zakat today. This is because; I have always ended up being disappointed by some other groups whom I had earlier run to for help. They would call for empowerment but at the end of the day, nothing comes out of it.

“But today, NAZAS has returned smile in my face. They didn’t only give me deep freezer but a huge sum of money. May the almighty Allah continuously blesses everyone in the agency and wipes away their secret tears just as they have wiped mine away.”

Speaking with THISDAY, NAZAS Chairman, Niyi Yusuf said, “Today is the second public disbursement of the agency in 2019, to commemorate the new Islamic year. And today’s disbursement is to over 250 persons.

“So today is the symbolic disbursement of N20 million to over 250 beneficiaries, reflecting the donations we have received from different donors during Ramadan period and we hope that this would help bring succor to a number of Nigerians.”

“Today for instance, the board has approved another N12.8 million to be disbursed in November to another set of beneficiaries, whose claims have been considered genuine by the board.”

Also speaking with THISDAY, the General Manager, NAZAS, Mufutao Omosola, said, “As you know, in Islam, the third pillar is to give Zakat. And the essence why Allah mandates us to do so is to assist those in our community, and ensure that people around us feel the impact of the wealth we have.

“That is why NAZAS as an agency, is assisting Muslims to bring in their Zakat in bulk, so we can in turn give it to deserving beneficiaries. We identify those who come to us to request for assistance in different area, be it health, education, scholarship, empowerment and so many other things they might need, in ensuring that the poverty level is reduced to minimum level.

“And all praise belong to Allah, we have seen some among them, that are even coming back to now pay Zakat. This shows that Allah has blessed them, and blessed the work of their hands, which is what is good for us at NAZAS,” he stated.