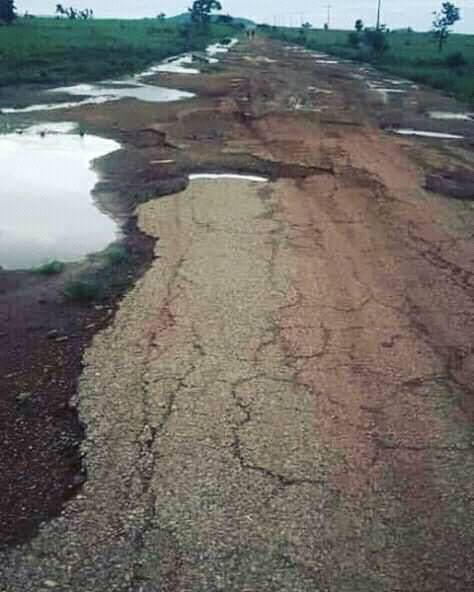 Laleye Dipo writes on the trauma travellers go through while traveling on major highways that traverse Niger State, which has earned it the sobriquet ‘highways of sorrows and death’

Traveling through the major roads in Niger state one needs prayer and fasting to arrive at their destination in one  piece and in good time.

The situation may even be worse in the rainy season like we are in now when most of the trunk A roads have become impassable.

Though the Federal Road Safety Corps (FRSC) has often blamed  accidents on bad driving, lack of respect for road signs and driving codes on the part of drivers, as well as the use of unserviceable vehicles, the real cause of accidents on these roads is mostly their terribly bad state.

This year alone, not less than 32 lives have been lost to accidents on the Minna- Bida road. In one case, 17 lives were lost. The statistics for other road networks are higher even as more than 15 lives were lost in one accident on the Bida – Mokwa road  early in the year.

The recent accident at the Dikko junction where seven lives were lost and several others injured also recorded 19 vehicles and 35 shops  burnt as a result of tanker explosion, which can also be partly blamed on the bad condition of the road where the tanker laden with PMS was to park.

Apart from loss of human lives occasioned by accidents on these roads, there is also the negative effect the situation has on the economy of the state. The gridlocks caused by heavy duty vehicles including tankers and trailers  ensure commuters waste valuable manhour  because they are always on the road for several hours. In recent time, between Paiko and Farindoki towns, a distance of less than 30 kilometers, travelers had to spend close to two hours because of broken down or overturned tankers and trailers that blocked a portion of this road. There was even a report that Governor Abubakar Sani Bello, who was going to Abuja from Minna by road, had to make a detour when not less than 200 trailers and tankers going in the same direction blocked the road because of its bad condition and refusal of the utility vehicle drivers to give way for each other at collapsed portions of the road.

Suffice it to say that the state is the gateway between the North and the southern parts of the country as a result movements of  vehicles to and fro both through this axis is always very heavy.

It is  pertinent  to also note that Niger State with the largest land mass in the country has cumulatively put together the longest stretch of federal roads in the country when compared to other states.

Sadly all these roads are owned by the federal government who has out of sheer negligence allowed them to deteriorate to the level they presently are.

The state government especially since 2015 when the administration of governor Abubakar Sani Bello came on board had made series of pleas to the federal government to intervene in the reconstruction of these roads but if not until a recent federal executive council meeting, no serious action has been made to address the complaints of the governor.

Even the planned intervention of the federal government will not affect the critical roads that have become nightmares to motorists.

For instance within the first 100 days in office of Bello, the government was reported to have intervened by rehabilitating the Tegina -Kagara road, maintained the Minna-Zungeru-Tegina road as well as carried out repairs of the Minna-Kakaki-Lambata-Suleja road, thereby spending huge amount of money in the process.

The most unfortunate aspect of this is that no sooner that these roads were repaired that they  collapse again because of the huge number of vehicles plying them with most of these vehicles carrying goods beyond the capacity and weight the road can take.

It is said by experts that some tankers carrying fuel that are supposed to carry 30,000 litres now ferry between 45,000 and 60,000 litres while other utility vehicles load more that 45 tonnes with negative effects on the roads not constructed to carry such heavy load.

The sorry state of these roads has become more pronounced during this rainy season. For instance in the last two months it takes a traveler over two hours to journey from Minna to Suleja, a distance of just 85 kilometers.

The state governor at a recent stakeholders meeting further lamented the sorry state of these federal roads. “On the poor state of some federal roads network in the state, which is necessitating us to spend huge resources amounting to over N2 billion on their maintenance in order to ease vehicular movements, we need the public to understand our predicament of paucity of funds; however, we are determined to seek possible ways of managing the situation until the rains recede when work will start on complete overhaul of the roads”, Bello said.

A coalition of youth groups in the state have also raised their voices against the dilapidation  of these federal roads and government’s seeming insensitivity to the issue ” despite the fact that we as a state contributed towards enthroning the APC federal government in 2015 and in 2019″.

Mohammed Saidu Etsu who serves as spokesman for the youths declared their readiness to ” match on to the Federal Ministry of Works Abuja if within a reasonable time nothing is done to ameliorate the situation”.

Etsu alleged at a recent media briefing that “sabotage” could be responsible for the bad state of all federal roads in the state because of lack of funding of some of the projects which contracts have been awarded giving the Mokwa- Bokani- Makera project where the bridge and a reasonable portion of the road collapsed since 2017.

“The contract for the repair was awarded but as we talk to you, the job has not been done because of lack of funding.”

The collapse of this particular road has further put more pressure on other roads passing through the state because motorists have to abandon them for the fairly good ones.

The Niger State Coordinator of the Campaign for Democracy (CD), Alhaji Abdullahi Jabi also commenting on the state of these roads especially the Minna -Suleja axis declared: “the condition of these roads are pitiable and regrettable resulting in a lot of carnages casualties and loss of manhour”.

Jabi further noted that “these roads need complete reconstruction as urgently as possible because it is the gateway between Niger state and the FCT, Northwest and other parts of the country. Injury to this road is injury to every part of the country”.

While the state government awaits serious action from the federal government to tackle this problem, it has however taken emergency steps to save the remaining portion of the roads with its plan to check the movement of overweight vehicles through the state.

Bello however assured motorists and the people of the state that his administration will continue to find solution to the problem.

“In the interim, we will continue to work on the failed portions of Minna-Suleja and Minna-Bida roads. Although, most of the federal routes in the state are in very deplorable conditions having been constructed some 35 years ago, they have outlived their life span and perhaps, beyond palliative maintenance, the state government will continue to make sure that the roads are usable.

“We have also given directives to the appropriate agencies to ensure strict compliance of tonnage of heavy-duty vehicles plying our roads,” Bello told a recent stakeholders forum made up of politicians, traditional rulers members of civil society groups and the academia in Minna.

However, one of the planned step by government may create another crisis because some commercial vehicle drivers will flagrantly disobey the law and this will cause serious crisis of unimaginable proportion for the state and those who will see to the implementation of the policy.