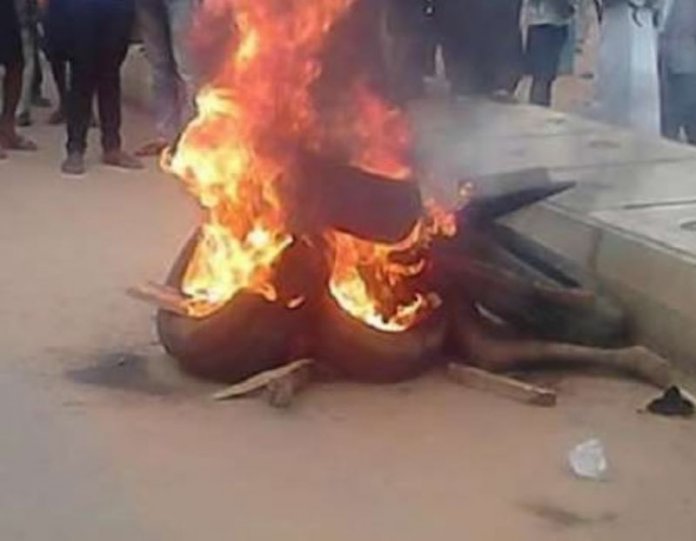 The suspects were three young men, while the female victim was rushed to Kubwa General Hospital for treatment.

At the scene of the incident, a Vehicle Inspection Office (VIO) officer, Mr Aminu Umar, told NAN that the incident happened at about 8:00a.m. when a lady inside moving vehicle was heard screaming for help.

“The lady was suddenly pushed out of the vehicle while screaming. A motorist, who saw what had happened, pulled over in front of the vehicle and blocked it under the Dutse Bridge.

“From there, Okada riders (motorcyclists) surrounded the vehicle and told them to come out.

“They asked them if the vehicle was one chance (kidnappers) and the next thing, they started beating them and eventually put fire on them and the vehicle,” he said.

Mr Sylvanus Ekpenyong, Route Commander, Federal Road Safety Commission (FRSC), said that his men were alerted of the event by some people while on duty at Dutse.

“We were at Dutse junction and we got information that there was traffic building up before the Dutse Bridge because a vehicle was on fire.

“We rushed down there to clear the road only to see three dead burnt bodies and a burnt vehicle.

“When we made inquiries from eye witnesses, they said it was one chance (kidnappers).

“So we are here to ensure free traffic flow of vehicles but we don’t know the exact group of people who burnt them,” he said.

An eye witness who is also a motorcyclist, Mr Aliyu Mohammed, said that angry motorcyclists attacked and burnt the suspects because it was obvious they were kidnappers as described by the victim.

Mohammed said that it was the normal tactics of kidnappers operating in Abuja to push victims out of their moving vehicle after carrying out their illegal act.

He however, said that the incident of today would serve as a warning to all those involved in such activities within the territory.

NAN also reports that security agents were on ground to ensure the bodies of the suspects were evacuated to a nearby mortuary as they ensured peace and free flow of vehicles in the area. (NAN)

editor - June 5, 2020 2:22 am
7
Guest Columnist: Okey Ikechukwu It is a fact of science that everything on earth gives out a definite radiation. It is also a fact of...