In spite of the corrective measures over the years, the imbalance in Nigeria’s export trade has persisted with the non-oil sector accounting for just about six percent of the country’s exports revenue. Economic experts have therefore come up with ideas to unlock opportunities in the sector. They argued that it will set the pace for real economic growth if the government takes needed steps to implement them, reports Bamidele Famoofo

Oil is the oxygen that keeps Nigeria alive. At least statistics made available by the Central Bank of Nigeria (CBN) and National Bureau of Statistics (NBS) support the claim. Data from both government institutions shows that the oil and gas sector, which currently accounts for less than 10 percent of the nation’s Gross Domestic Product (GDP), contributes about 70 percent of government revenues and over 90 percent of export revenues.

According to the Managing Director/Chief Executive of Nigerian Export-Import Bank (NEXIM Bank), Mr. Abubakar Abba Bello, the implication of this is that the economic growth of the country is dependent on developments in the oil sector, such that when oil price is high, revenue from oil grows, (based on the assumption that production target is achieved), then the economy also grows and vice versa.

Further evidence of the strong correlation of the oil sector with economic growth was presented by Bello in a paper titled, ‘Unlocking Opportunities in Nigeria’s Non-oil Export Sector’, at the 2019 Annual Conference of the Financial Correspondents Association of Nigeria (FICAN) which held last weekend in Lagos.

The NEXIM Bank boss, who delivered a keynote address at the event, showed that with the collapse of the global oil price in 2015, due largely to supply glut and weak economic growth, the nation’s economy was negatively impacted in three major ways. Lower government revenues with attendant budgetary pressures at all tiers of government; decline in export revenue, which fell from $97.82 billion in 2013 to $82.95 billion in 2014, $46.11 billion in 2015 and $34.70 billion in 2016 before recovering to $63.09 billion in 2018; and weakening of macro-economic variables with naira exchange rate devaluation, rising inflation and high interest rates.

As a result of the ripple effects of the fall in oil price in 2015 was that the Nigerian economy slipped into recession in 2016, recording five consecutive quarters of negative GDP growth before recovering in the second quarter of 2017, following improvements in international oil price and increased availability of foreign exchange in the country.

“Besides revenue volatility, the oil sector is also associated with the Dutch disease phenomenon, often manifesting in Naira exchange rate appreciation, which makes other products less competitive in the export market. I am sure that many of our farmers would bear testimony to the positive impact on the agricultural produce of the collapse of oil price in 2014-2015.

“But even of more significance is the fact that the oil sector is an enclave, relying mostly on capital-intensive technology, with attendant consequences of low employment, which makes the sector incapable of generating enough jobs to address the growing challenge of unemployment in Nigeria, particularly amongst the youth,” Bello noted.

He called on the government to fully diversify the economy and move away from the dependence on oil to ensure sustainable growth and development.

Overview of the Non-oil Sector

At the moment, Nigeria’s non-oil exports sector, which comprises mainly of agricultural commodities and solid minerals, constitutes 97 percent of Nigeria’s exports. Crops like cocoa, cotton, palm oil, palm kernel, groundnut, and rubber were major export commodities. However, between 1970 and 1974, non-oil exports dropped from 43 percent to seven percent due to a rapid increase in the international oil price and Nigeria’s production. The ensuing Dutch disease led to the movement of resources out of the non-oil sector, contributing to its neglect and lack of investments in the erstwhile export sectors, particularly value-added export. It has been observed that Nigeria lost about $10 billion export opportunities in crops like cocoa, oil palm, cotton and groundnut alone.

In spite of the corrective measures over the years, the imbalance in the nation’s export trade has persisted with the non-oil sector now accounting for just about 5%-7% of Nigeria’s exports by value.

As a result of the above, the sector is currently characterized by a systemic decline in the contribution of total exports to GDP. The figures from 2014 to 2017 have been below the global average of exports to GDP of about 30 percent, according to World Bank data.

Other challenges of the sector are few destinations for export, with the dominance of limited number of agro-allied commodities such as cocoa, rubber, leather, shrimps/fish, sesame, cashew, and cotton, which account for over 60 percent of non-oil exports; insignificant contribution of the other agricultural sub-sectors like shea, ginger, cassava, yam, sweet potato, cowpeas and pineapple to export revenues, although Nigeria is one of the highest producers of these commodities, according to data from the Food and Agricultural Organisation (FAO); low export performance of the mining sector, which contributes less than three percent of total non-oil exports and one percent of GDP annually, even though Nigeria has over 34 solid minerals in commercial quantities; inability of Nigeria to develop significant footprint in services export, despite the dominance of services in the GDP.

Head of Tax and Corporate Advisory Services of PwC Nigeria, Mr. Taiwo Oyedele, who was a member of a crop of seasoned professionals assembled by FICAN to proffer solution to the challenges limiting growth in the non-oil sector at the 2019 Annual Conference, said Nigeria the tax system in Nigeria must be reformed if the economy must grow. Citing the recent case of increment in Value Added Tax (VAT) from 5 percent to 7.5 percent by the government, he said: “Some of us argued against it because I think the VAT system needs a reform first before an increase in rate.”

According to him, the government’s decision was taken without adequate consultations with stakeholders in the economy, adding that an increase of 2.5 percentage points will not make the desired impact in revenue generation.

The tax expert strongly believed Nigeria’s VAT system needed reform, especially when you draw a comparison with countries where the system is working. “In the other countries, they compare us with, those countries have a threshold, and so small businesses don’t have to worry about VAT and are excluded from VAT burden. Secondly, those other countries give you full credit for every VAT you pay whether you are consuming services or assets but in Nigeria, there is no input VAT. The effective cost in VAT is more than the five percent we see.”

“When you think about the VAT system, I would say, we have to create a Nigerian solution for a Nigerian problem. There is a report that says Nigeria is the number one in the world in terms of the percentage of our income that we spend on food. That percentage is 60 percent on the average. And in Nigeria, if you go to the poorest people, that percentage is between 80 to 120 percent. It means the poor people in Nigeria cannot even feed with what they earn. They have to borrow or buy food on credit, just so they can survive until tomorrow. Now when you are increasing VAT rate in an environment like that, you have to exclude those that are already vulnerable, by making what they consume to survive to be zero interest or exempt,” Oyedele explained.

Speaking further, Oyedele stated, “What we told them behind closed doors is to say, when you reform Nigerian VAT system to be a proper VAT, you exclude small businesses that are struggling, and also exclude what poor people consume to survive. Then you can even make VAT 10 percent, so that the people who bear the burden are people who can afford it, in line with the kind of agenda. Exclude businesses so that they don’t have to pay VAT on their investment and production. Companies don’t exist; they are vehicles for a human being to carry out their endeavors. So we have to reform the system to align with a proper VAT system.”

In his own submission, Managing Director and Chief Executive Officer (CEO) Heritage Bank, Mr. Ifie Sekibo, who was represented by the bank’s Divisional Head, Strategy and Business Solutions, Mr. Olusegun Akanji, identified education, health, infrastructure and stable policy environment as crucial factors that would aid Nigeria’s quest to unlock opportunities in the country’s non-oil sector and diversify its economy.

Akanji said that countries with better educated and healthy citizens as well as improved infrastructure and stable policies were better positioned to benefit from the non-oil exports.

“When you educate a people and you keep them healthy they will produce. The biggest earning for any economy is people. China and India probably earn more than any other country through remittances of their citizens who are working abroad and remitting substantially home. Good education also positioned India as a major global player in software technology.”

Speaking further, he added: “Nigeria needs to focus on qualitative education by evolving a transformative approach to education. That is the education that will lead to massive production of software.

We must also evolve a means of funding technology because it is the easiest way to earning higher revenue that can end our reliance on oil. If it is well done, some big corporations will buy these applications. We have to fund our educational system because we do not have a choice as far as developing applications are concerned.

“In addition, we do not need to over flog the need for appropriate infrastructure that will make our economy attractive to investors. And the last one is the stability of policy that will give investors the minimum assurance that their investments will produce something. But often the goalpost keeps on changing. Even the rich corporations are crying. Dangote tomatoes are working below capacity because it cannot find input.” 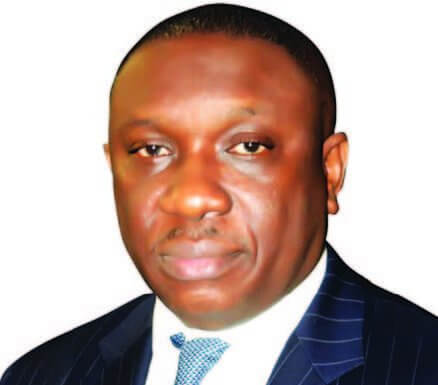 Egube: Focus Will Be on Job Creation after Restarting the Economy