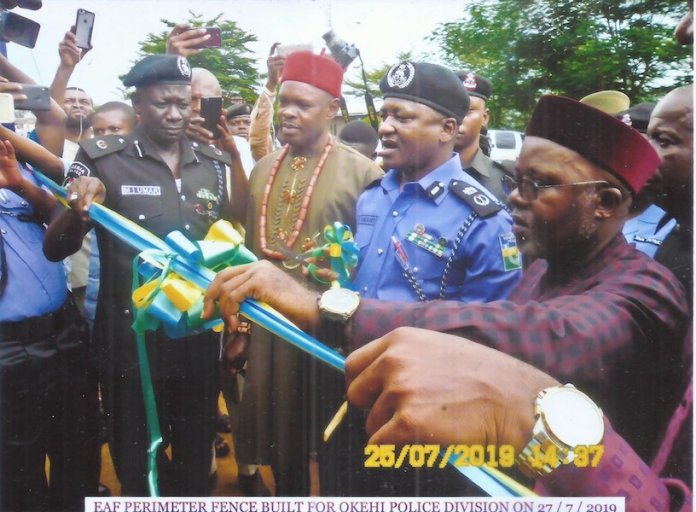 They left their motherland for a foreign land to carve out their own future. But determined to maintain security of life and property at home, Etche indigenes in the United States have come together to implement security initiatives in their native land, Obiamaka Ozulumba reports

The world has moved on, and development, with the alterations that follow it, has in many ways made security an issue of deep concern for the security agencies and the communities they serve. Societies looking to achieve sustainable security are adopting community policing, a strategy that makes the security authorities and the people allies in the protection of the commonwealth. So when recently indigenes of Etche, in Rivers State, resident in the United States launched some projects aimed at enhancing the fight against crime and criminality in the clan, it was with a communal security spirit.

Etche America Foundation (EAF) on July 25 launched a package of amenities and incentives they donated to the Nigeria Police in the area. It included the perimeter fencing of the Divisional Police Headquarters in Okehi, headquarters of Etche Local Government Area, and provision of a gate house, sewage, and toilet facilities for the station.

EAF has also donated two patrol trucks to the Nigeria Police in the area. It gave a patrol van to the Police Area Command in Isiokpo, headquarters of Ikwerre Olocal Government Area, and another to the Police Divisional Headquarters in Okehi.

The projects were part of the requests made by the Divisional Police Officer (DPO) at Okehi, Chief Superintendent of Police (CSP) Dayyabu Ahmed, when he attended, on the foundation’s invitation, the 2018 annual convention of EAF in Houston Texas. Ahmed had requested from the foundation the perimeter fence, job creation for unemployed Etche youths, and operational vehicles to facilitate rapid police response to security issues.

In addition to the fencing of the police headquarters, President of EAF, Dr. ROK Nwankwoala, stated in his address at the inauguration of the projects that the foundation was “currently working with Ogbakor Etche to bring about a needed critical solution to the state of joblessness in Etche nation.

“There is an ongoing partnership plan on ground to build a skills acquisition centre in Obiri Etche complex” in Okehi.

He said EAF had fulfilled two of the DPO’s requests. “The third request is in the process of being fulfilled,” he added.

But Nwankwoala also made requests from the Nigeria Police.

“In order to minimise the rate of crime within Etche and Omuma areas, Etche America Foundation is using this opportunity to appeal to the Federal Government of Nigeria, through the Commissioner of Police, Rivers State Command, CP Mustapha DanDaura, to create a Police Area Command with headquarters at Okehi, which will cover Etche and Omuma areas,” the EAF president stated. “We believe if our request is granted, it will assist to reduce crime in these areas with the presence of more police posts that will be closer to the communities”.

Nwankwoala listed other community development initiatives embarked upon by EAF in Etche to include the award of scholarships to intelligent but indigent students, with 11 students currently on the scheme at various Nigerian universities. Six others have been selected for sponsorship in courses spanning four to six years.

EAF women recently bought laptops and distributed to all government secondary schools in Etche. And in the area of healthcare, EAF has embarked on several health missions to help in the diagnosis and treatment of less privileged members of the society.

The commissioning ceremony attracted traditional, political, business, and youth leaders as well as security heads from Etche and beyond. Security and development of Etche were on their minds, and they formed a haunting subtext in their speeches.

DanDaura commended the security consciousness of the Etche people. He said the Nigeria Police was over-stretched and underfunded, and required assistance from all and sundry, as security is the responsibility of everyone. The police commissioner lauded the people’s commitment to the equipment of the police for effective operations, saying the perimeter fence is a good way of protecting the security agents to be able to protect the community.

He announced that police officers who had stayed too long at their postings, with a tendency to become familiar with criminals, would be redeployed, for the effectiveness of the police and security of the communities.

The visit to Etche was DanDaura’s first official outing outside Port Harcourt since he assumed office as Rivers State Commission of Police. The 40th Commissioner of Police in Rivers State, he was recently posted to the state from Anambra.

In his remarks, DPO, Okehi Divisional Police Headquarters, CSP Chebwarke Hamuel, appealed for more assistance to increase police visibility in the area and crime-fighting capability in every community.

Created in 1990, with two outposts at Okomoko and Afara, the Okehi Divisional Police Headquarters has the largest land mass of all Police Divisions in the state.

President-General of Ogbakor Etche, Sir Machy Nwodim, JP, reiterated the need for Etche to have its own Police Area Command with headquarters in Okehi. Nwodim presented a formal request letter to that effect to the police commissioner.

Chairman, Board of Directors, EAF, Mr. Dominic Amaugwu, stressed the readiness of the foundation to continue to contribute to the development of the Etche nation. Amaugwu urged Etche political leaders, and the elite generally, to assist in the skills acquisition programme being planned by the foundation to help reduce youth unemployment in Etche.

Anyanwu promised to assist with renovation of the roofs of the police building and other measures to motivate the police for success in their responsibilities.

In his words of appreciation, Secretary-General of Ogbakor Etche, the umbrella association of the Etche people, Deacon Eleazar Kas-Nwogu, thanked the personalities that graced the occasion. Kas-Nwogu commended especially the Onye-Ishi-Etche, Ochie E.N.B. Opurum, for his “dogged commitment in supporting growth and development in Etche.”

He extolled the Ogbakor Etche sister organisation in the diaspora for the development initiative, saying EAF has displayed an “altruistic disposition worthy of emulation.”

EAF was founded in November 1995 in Washington DC as a humanitarian organisation dedicated to redressing the erosion of basic values and societal necessities in Etche. It was incorporated on November 25, 1996 in the State of Delaware as a non-profit, non-political organisation of Etche sons, daughters, and well-wishers residing in the United States of America.

EAF’s core “mission is to promote unity and understanding among Etche families and well-wishers in both the United States of America and Etche nation through shared interest.”

The Etche diaspora association’s focus on peace and security in their native land is a wonderful development for a people whose wellbeing has been severely challenged by years of social, political, and economic decadence. Interventions like this one would help to create excellent models for the younger generations to look up to, as one mason at Okomoko put it.