A report just published in The New York Times (NYT) has painted a depressingly grim picture of the Nigerian military in their battle against Boko Haram, claiming the terrorist sect has returned to the battlefront stronger and better armed. The story follows hard on the heels of audacious raids on military brigades at different times by Boko Haram, using more sophisticated weapons, including drones, to aid their operations.

Meanwhile, West African leaders on Saturday announced a billion-dollar plan to fight the rising problem of jihadist violence in the region, at a summit in Burkina Faso.
The plan, to be funded from 2020 to 2024, was announced at end of the Economic Community Summit of West African States in Ouagadougou, where the ECOWAS nations were joined by Mauritania and Chad.
ECOWAS had decided to mobilise “the financial resources of up to a billion dollars for the fight against terrorism”, said Niger’s President Mahamadou Issoufou.

The money, paid into a common fund, would help reinforce the military operations of the nations involved — and those of the joint military operations in the region.
Full details of the plan would be presented to the next ECOWAS summit in December.
The fight against the rising tide of jihadist violence in the region has so far been hampered by a lack of funds.
The G5 Sahel, a joint taskforce, was created in 2014 to try to tackle the problem, backed by former colonial power France.
From July 2017, it pooled troops from Burkina Faso, Chad, Mali, Mauritania and Niger in a bid to drive back the jihadist groups.

But a lack of finance, training and equipment, limited their effectiveness and their numbers. For the moment, the force numbers 4,000 troops, when 5,000 were originally planned.
ECOWAS — the Economic Community of West African States — brings together 15 countries whose economies range from regional heavyweights Nigeria and Ivory Coast to the impoverished Liberia and Sierra Leone.
Landlocked Burkina Faso, Mali and Niger are non-coastal states.
The September 13 report by NYT, authored by Dionne Searcey, and titled, “Boko Haram is Back. With Better Drones,” claimed the war against insurgency might have suffered a major setback, as the insurgents still roamed the countryside of the North-east with impunity.

According to the report, Nigeria’s war against the Islamist extremist group, Boko Haram, was meant to have been over by now, a situation President Muhammadu Buhari also boasted about when he alluded to the progress so far recorded in the fight against the sect.
The report noted that despite repeatedly declaring that Boko Haram had been “technically defeated”, “A full decade into the war, however, Boko Haram militants are still roaming the countryside with impunity.
“Their fighters now have more sophisticated drones than the military and are well armed after successful raids on military brigades.”

NYT report quoted local politicians and security analysts as some of its sources.
Contrary to recent reports by the Nigerian military that there was no territory under the control of the insurgents, the New York Times report said, “Militants control four of the 10 zones in northern Borno State, near Lake Chad,” adding, “They are pulling off almost-daily attacks, including opening fire last week on the convoy of the governor of Borno State (Babagana Umara Zulum).

“To people in villages, like Konduga, Boko Haram’s defeat seems distant. The attack on June 17 that wounded Abdul and his friends (his last name is being withheld to protect him from reprisals) also killed 30 people — eight of them children.”
Citing corruption, lack of motivation and seeming poor leadership as some of the factors responsible for the military’s pitiable battlefield performance, the report noted, “By many accounts, the Nigerian military is demoralised and on the defensive. Some soldiers have complained they haven’t had a home leave in three years.

“Their weapons and vehicles have fallen into disrepair. In August, the new commander of Operation Lafiya Dole, which means ‘Peace by Force’, publicly reminded his field officers to give food and water to troops. He is the eighth commander in 10 years.

“The military announced in August that it is pulling back its troops from far-flung outposts in the countryside and gathering them into fortified settlements it calls ‘super camps’.
“The super camps are inside of garrison towns, where the Nigerian military in recent years settled tens of thousands of civilians — either after Boko Haram chased them away, or soldiers burned their villages and rounded them up, saying it would secure the countryside.”

Continuing, the report explained that though the garrison towns were ringed with trenches to contain militant invasions, the pullback had also given free rein to Boko Haram fighters in the barren countryside.
“Inside the super camp in Bama on a recent afternoon, a camouflaged tank lurched down the street, blue smoke pouring from its underside, its tracks looking like loose teeth about to fall out – it was piloted by helmetless soldiers with open shirts, and a gunner wearing a crown of leaves, who plowed into a parked minivan, partially blocking the road, smashing the vehicle,” the report observed.

One of the sources approached by The New York Times, Major Ak Karma, told the newspaper that a Boko Haram attack there had been thwarted days earlier, downplaying the threat.
“We have one or two problem attacks by Boko Haram, but that doesn’t mean they have a grand offensive,” said Major Kama, who reportedly added, “Bama is a fortress.”

Unfortunately, for Major Kama, the camp was attacked the following day, The New York Times noted, adding, “The war with Boko Haram has devastated the population in rural northeast Nigeria, one of the poorest regions on earth.
“More than two million people have fled their homes, tens of thousands have been killed and many more injured, abducted and conscripted to join the fight. The International Committee of the Red Cross said this week that nearly 22,000 Nigerians have been reported missing during the crisis.”

The New York Times report was soon seemingly accorded credibility after the Islamic State’s West Africa Province (ISWAP) fighters on Thursday carried out deadly attacks on military formations and civilians in three towns of Gubio, Gajiganna and Gajiram in Borno State, killing six soldiers and a civilian militia leader.
The attack also came three days after ISWAP ambushed Nigerian soldiers in Gudumbali town, also in Borno State, killing nine soldiers of Operation Lafiya Dole, while 20 others could not be accounted for.

Curiously, the Chief of Army Staff, Lt. General Tukur Buratai, in his response, Friday, only ordered troops to go all out and deal decisively with Boko Haram and ISWAP. He was silent on the setback, reportedly, suffered by military in Gudumbali, Gubio, Gajiganna and Gajiram, where six soldiers were killed during a Boko Haram attack.
“The bodies of six soldiers and the local head of the Civilian Joint Task Force (CJTF) in the town were recovered outside the town with bullet wounds,” a security source was reported as confiding to AFP.

editor - January 17, 2021 3:00 am
0
THE ALTERNATIVE With Reno Omokri As a result of the threats that have been made by certain persons against Matthew Hassan Kukah, the Catholic Bishop... 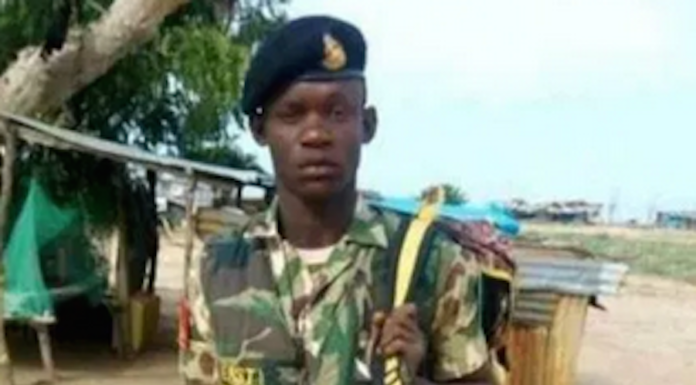