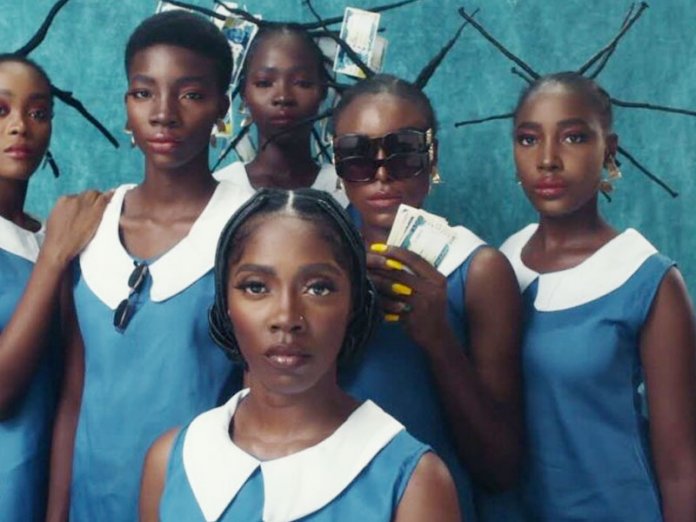 Recently signed to international record label, Universal Music, Nigerian singer-songwriter, Tiwa Savage enjoys a larger platform to project her sounds, mostly afrobeats, to the rest of the world. In order to maximise the reach availed on this platform, she assumes a new persona, one textured with activism, on her newly released single, ’49-99’.

The track focuses on some of the socioeconomic and political construct in the country, shifting away from her usual flavour that leans towards themes as love, vanity, and sex. The diva launched a full-on campaign that aims to reorient the state of mind of the governed, reminding them of where and who they ought to be or represent as a nation. Call it her version of Michael Jackson’s ‘They Don’t Care About Us’ – although subtle with lyrics – and you would not be entirely wrong.

The visuals for ’49-99’, more than anything else, was what had music lovers talking. It was released on Thursday, September 5, and garnered over 700,000 views on YouTube within three days of its world premiere. Although, she is no Rihanna, those numbers are quite strong for someone of her status to pull in, and goes to reiterate her relevance in the Nigerian music industry being in the mainstream for almost a decade, and also reflects her burgeoning career on the international music stage as one of Africa’s music ambassadors.

A first listen gives off the plot on which ’49-99’ is assembled on. It lies in the first line of the opening verse – ’49 sitting, 99 standing’. One is immediately taken back to Fela Kuti’s critically acclaimed 1978 track ‘Shuffering and Shimiling’, a satirical attempt by the late Afrobeat legend that paints a poignant portrait of the chronic poverty endured by the Nigerian masses using everyday commute in ‘molue’ as hues. Tiwa wisely clings to and adapts Fela’s model by employing a musical method that better reflect today’s society.

Right off the bat, masculinity is highlighted using the survival of the fittest narrative through a staged fight between two heavyweights while spectators cheer. This, in a way, fairly represents the political climate in the country where affluence affords politicians the chance to throw their weight around, fighting for political positions while the masses cheer on in hopes for ‘stomach infrastructure’.

In the follow-up scene unveiled by a revolving view, Tiwa towers as cabal overseeing the entire situation to pick certain areas to influence. She is flanked by two bodyguards who symbolised the protection that comes with influence. Her presence is barely noted by the frenzied masses.

In another scene, she recreates Eliot Elisofon’s ‘Congo High: Class of ’72’, a collection of high school girls in threaded hairstyles donning blue uniforms accentuated with white-collar. Harnessing the work of the American photographer, she expounds on the struggles of the girl child in striking a balance between school life, domestic chores, and work life in an economically unstable clime. The montage goes further beaming feminist light to expose the influence of politicians on young impressionable girls and vice versa.

Whilst the visuals heavily exploit sexuality to drive home points on crime, corruption, and manipulation, the lyrics bears a proverbial nature, with lines loosely interpreted from the pre-chorus, rendered in Yoruba language. In English translation, it means “monkeys aren’t skilled at jumping; they enjoy the advantage of trees planted in close proximity.” This line directly alludes to nepotism, a widespread practice in public offices.

Incorporating these essences into a song is a hard feat, especially for a song positioned to serve as a crossover piece in her career. In order for her to satisfy the global audience, she incorporates certain vanities by mentioning Prada and Versace (well-known brands) into the lyrics. For an activism track, it is faced with the dilemma of infusing trends just to fit in. Here, its activism is slightly compromised, giving off a half-baked effect. Although, lacking the wrath expected from a heroine, she manages to pass the message one way or another.

Asides political statement made, the visual projections are those expected of a typical Tiwa video: high-end clothing, light choreography, and racy footages that spark controversy. However, what seems to have improved is the confidence with which she carries herself. It could be felt from the first scene where she has a pet monkey hanging from her shoulder, to the last scene where five girls share a blue backdrop with her. Perhaps her new found confidence emanates from the message behind the lyrics that emboldens her, or the boldness that comes from experience as a singer.

’49-99’ might sound like the best option to launch her international debut, but while this sounds good on paper – owing to its stunning visuals – it is not a catchy club banger to sway music lovers to her camp. This doesn’t mean that it is a flat tune, only that listeners need ample time for the song to grow on them. This might prove an arduous task considering the influx of new songs on the internet and airwaves almost on a weekly basis.

It may not be the commercial breakthrough she might be expecting but what is more assured is that critics will love this effort for being a different approach taken by the ‘African Waist’ singer. She certainly has etched a mark in the annals of Nigerian music history by reviving Fela’s vision of a better Nigeria on ’49-99′. And by extension, this also reflects the level of growth in her career as a grown woman that must be heard whenever she speaks.