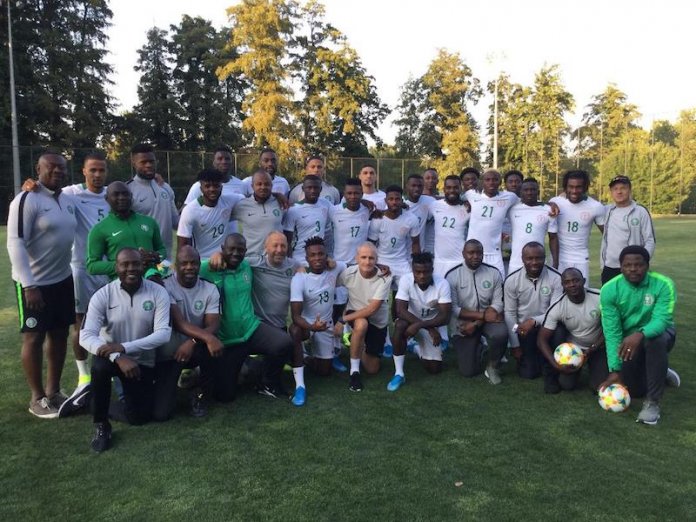 As Super Eagles file out this evening to take on Ukraine in an international friendly in Dnipro, stand-in Captain of the team, William Troost-Ekong yesterday warned his colleagues not to expect a walk in the park as the hosts have a solid team capable of causing reputation damage.

“Ukraine is a strong team with a lot of very good players across Europe. I know a few of those in Italy where I play. This game is definitely going to be very tough but we will give our best and also make it very difficult for them. I believe it will be a very good game,” observed the Udinese centre back ahead of the game.

Similarly, Super Eagles Coach Gernot Rohr is also backing the Ukrainian national team to qualify for the 2020 European Championship and predicted that the Yellow-Blue will be a force to be reckoned with in the future following the triumph of their Under-20 at the 2019 FIFA U20 World Cup.

Rohr was the coach of the Niger Republic team that lost 1-2 to Ukraine at the Olympic Stadium in a friendly five years ago and has labeled tonight’s game a difficult match for Nigeria.

”Of course, we studied the game of the national team of Ukraine. The team now has very good position in the standings of the Euro 2020 qualifying group,” Rohr told reporters at the pre-match conference in Dnipro.

”Most likely, the Ukrainian team will qualify for the European Championship.

“In addition, memories of the recent match of the youth team of Ukraine with Nigeria at the U20 World Cup this year remains fresh.

”In Ukraine, very progressive and talented youth abound. So, I think that the Ukrainian team has a great chance of success in the near future.”

Interestingly, spate of injuries to key Super Eagles players is not likely going to allow Rohr to field his first eleven.

Weeks later, Odion Jude Ighalo, top scorer in the Africa Cup qualifying campaign and at the tournament proper, also put his international boots on the shelf.

Captain Ahmed Musa pulled out of the trip to eastern Europe only days from his flight, as an injury failed to heal as quickly as he expected, and he duly opted to pay more attention to that.

Obi, Ighalo, Musa, Omeruo, Ebuehi and Ndidi were all at the FIFA World Cup finals last year, and Onyekuru only missed the party because of injury.

Given that six of them (except Ebuehi who also suffered a non-fortuitous injury) were also at the Africa Cup of Nations in Egypt earlier in the summer where Nigeria finished third and with the bronze medals among 24 teams, the squad that will file out today is largely a newbreed.

It is an opportunity for the new boys called to Super Eagles to win the heart of Coach Rohr and be considered part of the mainstream going forward.

Germany-based goalkeeper Maduka Okoye is in camp to give Francis Uzoho and Ikechukwu Ezenwa a stiff fight for the number one shirt, while usual suspects Olaoluwa Aina, Chidozie Awaziem, Leon Balogun, Jamilu Collins and William Ekong will try to ward off the challenge of Semi Ajayi (listed as defender) and returnee Bryan Idowu at the rear.

In the middle, Oghenekaro Etebo and Alex Iwobi should be ahead of returnee Anderson Esiti and new boy Joseph Aribo. It remains to be seen how Kelechi Iheanacho will fit into the middle equation.

The fore is brimming with youth and vitality, with Victor Osimhen, Moses Simon, Samuel Chukwueze, Paul Onuachu and Samuel Kalu all available, alongside new birds Joshua Maja and Emmanuel Dennis.

Ukraine, like most jurisdictions of the former Soviet Union, broke off from the collapsed mother nation in 1991.

Nigeria and Ukraine have never met at senior level, but a group phase clash at the FIFA U20 World Cup in Poland earlier in the summer ended 1-1. Ukraine eventually won the championship.