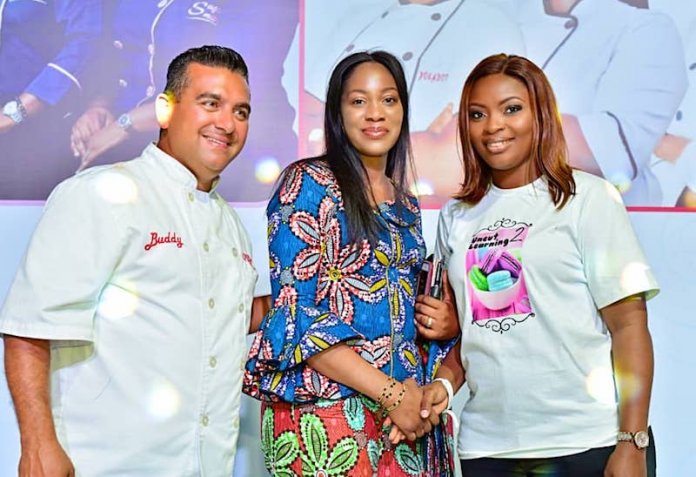 Oluchi Chibuzor
As part of the 100 days in office celebration of Lagos State, Mr. Babajide Sanwo-Olu, the state last week sponsored the ‘Dewdrops Uncut Learning 2,’ a seminar for bakers.
The event, which was in line with the government’s economic agenda tagged ‘THEME’ was aimed at promoting tourism and entrepreneurship in the state.

The THEME under the Sanwo-Olu-led administration stands for Traffic management and Transportation; Health and Environment; Education and Technology; Making Lagos a 21st Century Economy, and Entertainment and Tourism.

Sanwo-Olu, had promised to give priority to the private sector as a critical stakeholder in the economic development of Lagos, assuring that he would create a conducive business environment to attract investments and industries, support the growth of the local economy, and empower the workforce using local talent to drive job and wealth creation.
The Lagos state government who also said he would encourage youth development and provide support for key economic sectors like agriculture, housing and security, has continued to take steps towards actualising his pledge.

Opportunities in Cake Industry
Often seen as a gender-based profession, the cake industry was the centre of discussion at the uncut learning 2 Seminar and Cake fair.
Cake is a form of sweet food made from flour, sugar, and other ingredients, and that is usually baked. But cake now covers a wide range of preparations that can be simple or elaborate, and that share features with other desserts such as pastries, meringues, custards, and pies and comes in different shapes, sizes that capture one’s imagination and emotional attachment to a particular object, buildings, structures, etc.

The most commonly used cake ingredients include flour, sugar, eggs, butter or oil or margarine, a liquid, and leavening agents, such as baking soda or baking powder. Additional ingredients and flavouring include dried, candied, or fresh fruit, nuts, cocoa, and extracts such as vanilla, with numerous substitutions for the primary ingredients, as may be demanded by clients.
Cakes can also be filled with fruit preserves, nuts or dessert sauces (like pastry cream), iced with butter cream or other icings, and decorated with marzipan, piped borders, or candied fruit.

Notably, Cake is often served as a celebratory dish on ceremonial occasions, such as weddings, anniversaries, and birthdays and recently in Nigeria as part of traditional wedding ceremonies to reflect the huge cultural heritage background of the intending couple.

Uncut Learning 2 the second edition in a row now met the expectation of over 3,000 attendees that gathered to learn from the best the country could offer at the event. It also placed Nigeria on the map of the world in the bakery industry, considering the profile of experts that attended the event.
This year’s event was special and a game changer. It was regarded as the best thing to have ever happen to the sub-sector which is believed to be an untapped goldmine in the country.

Precisely, it featured cake entrepreneurs and enthusiasts from Tanzania, Vietnam, Canada, Brazil and the United States of America.
The theme: “A Fun Fantastic Bakers Seminar,” was chosen because of the presence of the world renowned cake expert, Buddy Valastro, popularly known as the Cake Boss, a fourth generation baker that is globally recognised.

Speaking at the conference, the host and Managing Director/ CEO, Dewdrops Cakes Limited, Mrs. Ezinne Okonkwo, said her cake journey so far has not been without challenges, after undergoing the first training in 2006 in Port Harcourt.

With her training in 2010 having obtained PME Diploma certificate at the Mix and Bake school on behalf of PME United Kingdom (UK)
“I have done courses with Lauren Kitchen, Alan Dunn, Ron Ben Israel, Rossana Schrappe and a lot of private courses with some sugar gurus.
“The quest for knowledge has led me to attend some demo classes with different instructors, which made us to include over 20 demo classes that worth over million of naira to help us encourage upcoming bakers in the country,” she said.

Commenting on the conference, a coach at the session and the CEO, Bakers Option, Ndirika Udoyeh, said with this event, “the industry has been pushed forward into the future, sales has been tremendous and for me having the opportunity to teach at the conference was memorable one I will not forget,” she said.

On her part, the MD, Leymax Food Products, Tahiya Amour –Aljabry, who flew in from Tanzania, said the opportunity to network and learn new things was worth the amount spent to attend the programme.

“Each of the coaches have touched different areas to give me skills to leverage on. And I hope this can happen in my country,” she stated.
Another participant, Soyombo Hanna, said it was fun as she has learnt wood design, edible mask, champagne bottle design, butter icing from Cake Boss, which would help to show to her clients.

One of the major highlight of the conference was that exhibitors were allowed to display their products at a cheap price at an international conference that had participants exposed to all kinds of products at reduces prices.

There was a demo session at the event which was handled by international and national coaches, who taught the attendees how to make cake in different shapes.
The Cake Boss expressed satisfaction for the opportunity and commended the Lagos State government for sponsoring the initiative.

With his coming to Nigeria announced on his twitter page, fans could not bear the nostalgic feeling on him mounting the stage to do what they have been watching on Television.
Described as mentor of mentees in the cake industry, Valastro sees himself as been fortunate to have learnt the craft from his father, who was a baker as well, at a tender age. But he had the opportunity to grow the business after his father’s death.

He said, “I am proud to be a baker. This is what gives me happiness and has brought me to Nigeria,” adding that, “now is the best time to invest in the business considering the amount of potential in the country.”

“I have been travelling to other countries. I must confess the kind of decoration I have seen here is better than what we have in America. And I also believe in hardworking, respect for elders and employees and good customer relationship as key to the growth of the brand you see and watch,” he added.

He stated that it has not been easy to produces over 300 episodes that has been aired in about 210 countries, 45 languages and seen by over one billion people around the world.
For the New York Times best-selling author, mixing egg, sugar, butter means a lot more than making cake.
“As a fourth generation baker, it is a constant source of pleasure, pride and creativity,” he said.

He further explained that creating amazing cake connects him to the memory of his father, which he said had made him have over 200 publications in his ten-year career.
However, his talent and passion for the family business, Carlo’s Bakery, has earned the straight-talking cake expert the moniker, and the Cake Boss.

Clearly, with the THEME designed to drive economic resurgence and create jobs, Sanwo-Olu has taken steps to stimulate economic growth and drive development. This, for instance, saw the launch of the ‘LSETF W-INITIATIVE,’ an initiative designed to provide funding for women entrepreneurs in Lagos to achieve their growth objectives and create jobs for young people.

Beyond providing finance, it will drive financial inclusion among women and provide support to businesses to stimulate growth and consequently create employment.
In Lagos State, the government’s strategy is to optimise and sustainably grow the local economy, projected to be the fifth-largest economy in Africa, by creating access to funds for women entrepreneurs. Other initiatives which will further boost economic growth will be unveiled in the near future in line with the T.H.E.M.E.S agenda.