Masari Grants Clemency to Six Convicts in Katsina  52 mins ago

Pastor Adeboye to Hold Mega Crusade in Bauchi 1 hour ago 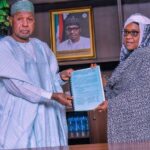 O’Jerry is the New Kid on the Block

O’Jerry, a media relations executive has finally fulfilled his music ambition. For long, the compere and vocalist tried to ignore his passion for music, focusing rather on his corporate job. Except on weekends where he performs at special gigs, O’Jerry has been doing a fine job in hiding his true talents.

It was only a matter of time before Providence came knocking on his door again. Now that he has finally heeded the call, he recently released his first single ‘Go Pay’ which is currently available on online music platforms such as Boomplay an iTunes. ‘Go Pay’ samples O’Jerry’s rich vocals and an astounding fusion of pop and fuji, accentuated by Afrobeat rhythms.

It is a known fact to his close friends that the young man from the south-west region is a cultural ambassador, promoting the indigenous sounds of the Yoruba people. The lyrics carry a message of perseverance to Nigerians and the world at large.