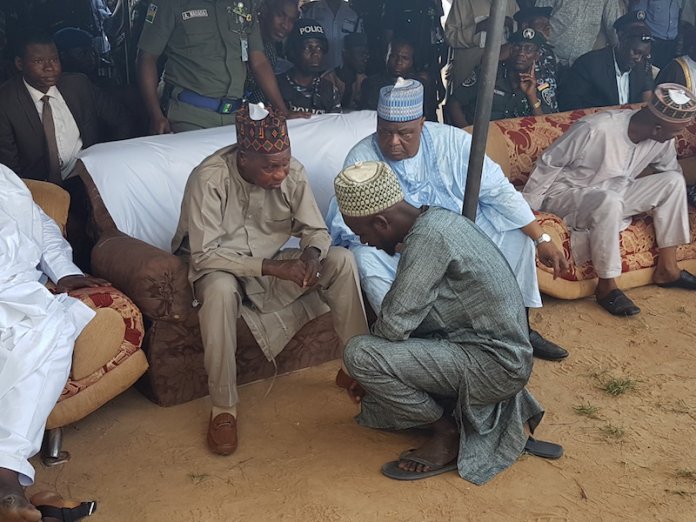 Governor Aminu Bello Masari of Katsina State has warned that he would not hesitate to sanction any traditional ruler or transition committee chairman found complicit in banditry, kidnappings and other nefarious activities in the state.

He said the state had sustained its reputation as a state of harmony for years despite the multiplicity of people and would not allow avoidable security challenges to tarnish its reputation and that of the citizenry.

Governor Masari gave the warning on Friday while speaking with self-repented bandits and Fulani leaders at Ungwar Tsamiya village in Faskari Local Government of the state as part of his dialogue with bandits terrorizing the state.

He said it was worrisome that bandits had brought wanton destruction of lives and properties of the citizenry in the state, hence the need for stakeholders not to support the heinous acts of the miscreants.

According to him, “As a government, we sworn to protect the welfare, lives and properties of our citizens. We cannot allow this avoidable loss to continue. If traditional and religious leaders play their role well, this problem will end.

“So, traditional rulers, district and village heads should listen. I swear, if we found any of you aiding the activities of these miscreants or destroying the effort we have put in place to cure this problem, that person will be sanctioned.

“And you that call yourselves Ardos (leaders of Fulanis) that liaise with other people to cheat your brothers in the name of helping them. Most of you are not helping them we know. I am urging residents to report anyone that cheat them to us for action.”

Also speaking, the Transition Committee Chairman of Faskari, Mr. Musa Ado, told the governor that bandits were taking advantage of the amnesty granted to them by the Zamfara State government to launch attacks on villages in the council and escape to their hideouts in Zamfara.

He therefore urged Governor Masari to synergize with the Zamfara State government to stop the bandits from unleashing attacks on villages in the council and parts of Katsina State.

Earlier, some of the repented bandits who spoke at the event, called on the state government to establish Ruga settlement in Tsamiya village to assuage their sufferings.

One of the repented bandits, Liman Mujana, said the construction of schools, roads and provision of water and other social amenities in the area would boost their economic activities.

Meanwhile, as of the time of filing this report, the governor and other top government officials including security chiefs in the state were heading to Dan Sabau village in Kankara Local Government for another interface with the bandits.

editor - January 24, 2021 2:01 am
25
SIMONKOLAWOLE! BY SIMON KOLAWOLE Recent events in south-western Nigeria, as I would offer to think, are not ordinary. First, Chief Sunday Adeyemo (also called Sunday...