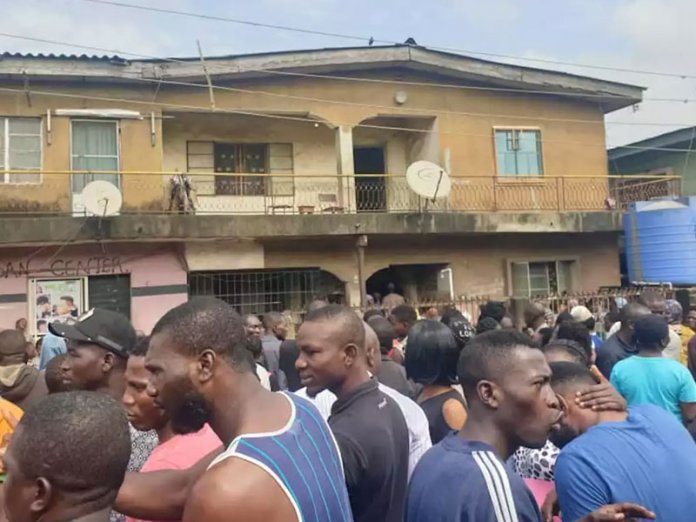 · There were pandemonium in the early hours of wednesday at Olowora Street, off Mafolukun area, Oshodi, Lagos, as residents woke up to discover seven members of a family, lying dead in their one-room apartment.

· The late family consisting of a husband and wife, with four of their children between ages seven to 15, and a 16- year old niece to the wife, were said to have retired to bed hail and hearty a night before, only to be discovered lifeless the following morning.

· It was alleged that they could have died as a result of an insecticide they had sprayed the night before going to bed, or generator fumes they could have inhaled during sleep.

· Residents of the area also suggested that they may all have died from a poisoned meal (Rice and stew) Iya Aliya prepared for the family a night before.

· THISDAY however gathered that two of their neighbours (names withheld) were likewise served from the same meal by Iya Aliya, but nothing happened to them.

· When THISDAY arrived at the resident, a homicide team of the Nigerian Police Force attached to Makinde Police Station had already evacuated the remains of the deceased, and sealed up the building.

· It was gathered that, it wasn’t the first time the family would be putting on the generators or spraying the suspected insecticide hours before going to bed.

· According to a resident in the area who is also a friend to the family and a community leader in the area, Agbalaya Adebayo, “yesterday, I was still with Baba Aliya till after 12 a.m. this morning.

· There were also speculations among the residents that, someone (yet unknown) might have been responsible for suffocating the family through the window with a strange chemical, while they were fast asleep at midnight.

· However, there was no evidence to back up such claims yet, as the state police Public Relations Officer, Bala Elkana, a Deputy Superintendent of Police, wasn’t picking his calls, as at the time of filing in this report.

THE EXIT OF DONALD TRUMP