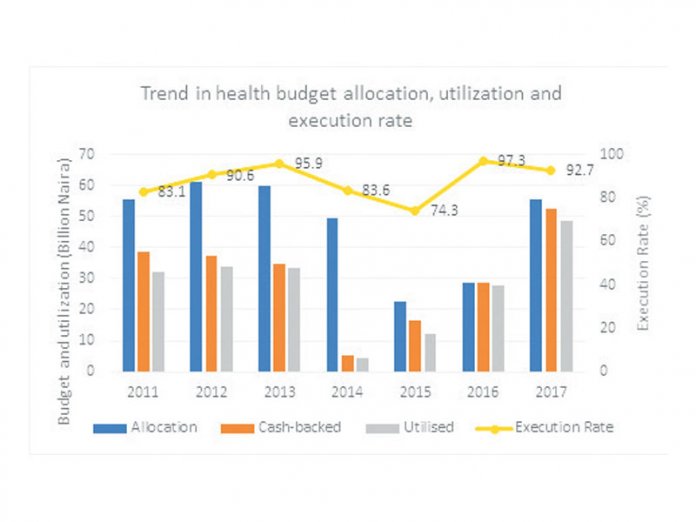 Despite the myriads of healthcare issues experienced by Nigeria, the federal government has continued to pay lip service to funding the health sector. Martins Ifijeh writes on the need for President Muhammadu Buhari to place optimum priority on the healthcare of Nigerians

While every minister of health ever appointed since Nigeria’s return to democratic rule in 1999 resumes their job with high hopes of transforming the health sector, majority of them have left the position with minimal effect to the sector, and by extension, not making any significant impact on the health of Nigerians.

Sadly, some have left the ministry worse off than they met it, partly due to their poor policy formulations, leadership styles, or insurmountable challenges they met on ground. This is irrespective of their genuine desire to address most of the healthcare issues the country battles with year in year out.

If there is one common hurdle that past leaderships of the ministry have not been able to surmount, and which has led to the snail growth of the sector since the last 20 years, it is the obvious fact that the federal government, whom these past ministers report to, does not treat the healthcare sector as a priority, hence give little funding to it.
When economic growth or security of the nation is discussed, health of the people is not considered a key requirement to achieving this. When the federal government talks about lifting poor Nigerians out of poverty or improving human capital development, it does not consider health as one of the strongest indices for wealth and capital development of a nation, hence leaders of the health ministry work against the tide to improve health indices even though only a paltry sum of money is allocated from the national budget for the myriads of health issues in the country.

Although the past ministers and healthcare leaders understand the importance of healthcare financing to the economic growth of a nation, same cannot be said of the Commander in Chiefs the country has ever had, or the ministers of finance, and their budget counterparts, or the economic team of the nation; this kind of fragmentation has often left healthcare stakeholders unable to implement ideal models for running the health sector adequately.

Global economic and development experts have often said for any nation to be considered strong economically, and on human capital development, it must have given priority to the education, and health.

This perhaps signals why in April 2001, members of the African Union, including Nigeria met in Abuja and agreed to allocate 15 per cent of their national budgets to the sector, and it was believed that if this was adhered to strictly, within the next five years, the poor health indices emanating from the continent would have been a thing of the past.

Unlike the big brother clout which Nigeria used in bringing these countries together to make the now famous Abuja Declaration, where the agreement was made, the country quickly made a volt face and has since then refused to honour an agreement it played host to 18 years ago, resulting in the poor health indices, high mortality rate and reduced life expectancy rate currently experienced in the country.

Like a habit which has now been considered normal, the Nigerian Government, again in 2018 followed the same trend. This time it even reduced the proposed health sector allocation from 4.16 per cent in 2017 to 3.9 per cent in 2018, even though the pile of healthcare issues were growing every year.

But the World Health Organisation (WHO) says for Nigeria to be seen to prioritise healthcare, it must at least spend a minimum of N6,908 per Nigerian in a year, which when multiplied by 180 million people will amount to N1.2 trillion. The WHO, in its wisdom, also recommended a minimum of 13 per cent of annual budget for health.

Between AU’s 15 per cent and WHO’s 13 per cent, the Nigerian Government has tilted towards none.

Thankfully, some countries have started raising their health budgetary allocation towards fully keying into the WHO recommendation of 13 per cent or the Abuja Declaration by the African Union of 15 per cent.

For instance, Rwanda reportedly devoted 18 per cent of its total 2016 budget to healthcare. Botswana budgeted 17.8 per cent to health; Malawi, 17.1. per cent, Zambia, 16.4 per cent and Burkina Faso, 15.8 per cent. But Nigeria still lags behind in this regard, which has had direct consequences on the funding capacity of the Health Ministry and its affiliated agencies and parastatals, thereby making the fight against poor healthcare very unrealistic.

Inquiry by THISDAY shows the federal government was still compiling data on allocation, release and money spent by various ministries, departments and agencies for the 2018 budget year.

Nigeria Spends Less on Healthcare than most Countries
The WHO Global Health Expenditure 2019 has shown that the Nigerian Government spends less on health than most other governments around the world with total government expenditure on health in 2015 amounting to N3,434.2 billion (US$17.9 billion), which translates to US$16 per capita.

A recent data from the WHO Global Health Expenditure 2019 for Nigeria indicates that this has further declined to merely US$10 per capita in 2016.

The International Monetary Fund World Economic Outlook 2018 has shown that Nigeria’s level of government spending is below government spending of all comparator countries except Cameroon at US$9. This shows that government spending on health is also well below regional and Low- and Middle-Income Countries (LMIC) averages, as well as the recommended US$86 per capita that represents the LMIC benchmark needed to deliver a limited set of key health services.

The low level of spending on health by the Nigerian Government is further evident when comparing domestic government health spending to Gross Domestic Product (GDP). As a share of GDP, domestic general government health expenditure (GHE) is only 0.6 per cent of GDP in 2015, according to the IMF World Economic Outlook 2018.

The low prioritisation of the health sector in the federal government’s budget is partially responsible for the low level of government health spending and has been a pattern over many years. While Nigeria’s deteriorating macroeconomic and fiscal context contributes to low levels of spending, investments in health over the last two decades, even in good economic times, have been consistently low.

Like FG, States and Local Governments Spend Little on Health

Health spending in Nigeria is dominated by out of pocket expenditures, which amounts to 72.2 per cent of current health expenditure in 2015. Recent data from the National Health Account shows that this has worsened to 75.2 percent in 2017. World Bank’s World Development Indicators 2019 has shown that this proportion of out of pocket expenditure is one of the highest in the world and the highest among comparator countries.

Health experts believe out of pocket spending on health, especially for poor Nigerians, will not only deter a marginal number of the people from accessing healthcare, it also leads to more poverty as they then spend the little they have on healthcare, and has the potential to increase mortality rates due to inability to pay for healthcare.

While for over 17 years Nigeria refused to implement the Abuja Declaration for allocating 15 per cent to the health sector, and by implication refusing to improve the health of Nigerians, the past Minister of Health, Prof. Isaac Adewole and his team, as well as the Chairman, Senate Committee on Health, Senator Lanre Tejuoso and his committee members, as part of means to ensure more money comes to health sector, activated the part of the National Health Act which gave room for the federal government to allocate at least one per cent of the consolidated revenue fund (CRF) to funding Basic Health Care Provisions Fund (BHCPF). In 2018, N55 billion was appropriated for it. So far, the federal government has released N27.6 billion for the BHCPF implementation. In 2019, it has appropriated N51.5 billion for same.

Does FG want Ehanire to Succeed?

Even though it is commendable that the federal government has given a marching order to all ministers, including Dr. Osagie Ehanire to ensure they meet set target, one thing is sure, if the federal government continues to starve the health sector of funds and continue to renege on the Abuja Declaration, it is by implication telling Ehanire he will only man the health ministry to kill time, which means he will go the way of many other past minsters of health who never succeeded.

Does Ehanire wants to succeed? Will his experience and expertise transform a sector starved of funds? Will he insist on proper funding to drive home his plans. Time will tell if he will go the way of past ministers whose impact were not felt by Nigerians.