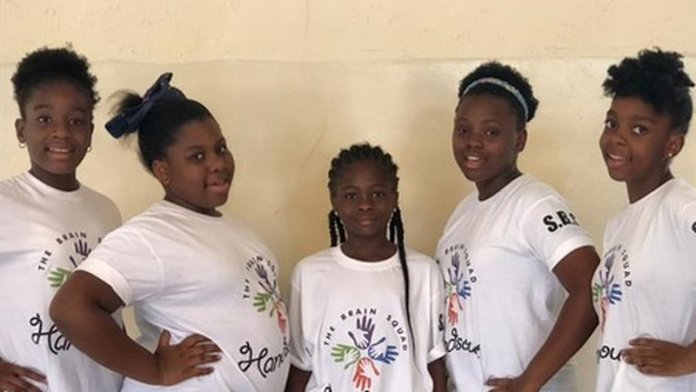 Come December 2019, a crowd funding application, Hands Out will be in operation, created by a team of pupils from Standard Bearers School, Lekki, Lagos to generate funds to send children from indigent homes to school.

The five girls: Pandora Onyedire, Ayomikun Ariyo, Ivana Mordi, Jadesola Kassim and Munachiso Chigbo, who are members of ‘Brainsquad’, created the app to compete in the 2019 Technovation World Pitch Summit, a Global Entrepreneurship Contest for girls between the ages of 10-18. The team participated in the finals at Silicon Valley in California, USA.

Briefing journalists about the development in Lagos recently, the founder of the school, Mrs. Adeyinka Oni said the app came about as a result of the pupils’ empathy for underprivileged children.

She said they went off and came back to ask her if the app can collect donations and then they pay the children’s school fees, she had to refer them to Mr. Adeyinka Oni for clarification and said to them that the money could be put in a trust and cleared the grey areas that she could not explain. Immediately that was settled, they decided to create an app, they will also allow people to cloth them and provide everything they need to make the school process that much easier for them. And they created the app, which they called ‘Hands Out’.

On how to get the benefitting children, she said to make it seamless, the school decided to partner other organisations that already do that kind of work in Nigeria. She said the school will partner with the International Women’s Society, which has a programme where it sponsors twins; it will also partner with Slum2School and another home in Abeokuta, Ogun State.

Oni said the primary school scholarship will be worth N50,000 for each child, adding that the children will be sent to private schools.

The school said will work with Stanbic IBTC Trustees to ensure that the funds are used for the purpose it was meant for and ensure accountability to the donors.

Currently, Oni said the school has completed the website and is inviting NGOs, especially in the north and South-south to submit their credentials so that the school can select those it will work with, since the app will be a national solution.

Recounting their experience in the US, one of the team members, Munachiso Chigbo said they went to the Museum of Technology, where they were introduced to Artificial Intelligence (AI) and robots; Google Ventures, where they practised their pitch; Uber, where they got to know the platform the company uses, among others. She said she was not a computer person but Technovation has exposed her to coding and the possibility of using it in her future endeavours.

FG Flags off Cash Grant for 6,800 Rural Women in Katsina