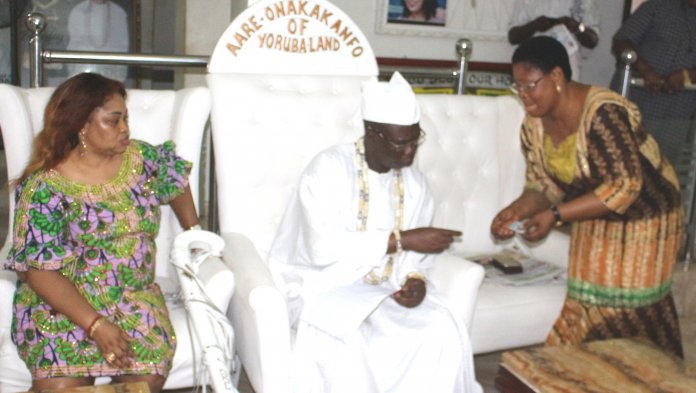 The Alaafin of Oyo, His imperial majesty, Oba Lamidi Adeyemi, III, has applauded the police and the southwest Governors on the recent move to partner with the Aare Gani Adams – led members of the Oodua Peoples Congress(OPC) in their  efforts to curb the spate of insecurity in southwest.

Oba Adeyemi made this known today, shortly after holding a closed- door meeting with the Aare Onakakanfo of Yorubaland, Iba Gani Abiodun Ige Adams,at the Palace in Oyo.  Adams had visited the Oyo Palace, on his way back from Ogbomosho, where he met with royal fathers, including the Soun of Ogbomosho, Oba  Dr. Jimoh Oladunni, the Onijabata of Jabata, and the Ajase monarch.

Adams, however, said the ancient city had, in the past, produced six Aare  onakakanfos all together, where the  recent OPC’s National Coordinating Council(NCC) meeting was also held.  Speaking, Alaafin said, with the new move, the police have shown a lot of commitment to stop the spate of insecurity in the region.  He said the partnership with the OPC will definitely bring the much needed peace and tranquility across the southwest.

“As custodian of Yoruba culture,the  traditional rulers have the native intelligence of their respective domains and kingdoms. We are very close to the people at the grassroots, and on daily basis, we are fed with information that is  crucial to the growth and development of the region.”

“For instance, in Oyo town and its environs,  I have all the information from across all the 14 local governments in the state. So,the  traditional rulers will always have their ears on the grounds  on all issues, especially, issues that have to do with the safety and security of their respective domains.”

Alaafin said after meeting with the Aare Onakakanfo, they have fine tuned the strategies and methods of approach, saying OPC will incorporate other notable groups, including the Vigilante, Agbakoyas and other reputable security outfits.  Oba Adeyemi expressed optimism on the new move by the Inspector General of Police, saying efforts should be made to fast track the initiative, with effective modalities put in place to get all the stakeholders involved without further delay.

Meanwhile, the Aareonakakanfo of Yorubaland, Iba Gani Adams, said now that the police and the southwest governors are ready to partner with the OPC,he would call a meeting  with leaders of other security outfits and stakeholders, including the Agbekoyas, Vigilantes, leadership of all  community hunters, and other relevant security outfits across the southwest.

He promised to also relate and liase with the traditional rulers on the move to make their various communities safe against marauders. “Our royal fathers would be involved because they are in charge of their respective communities and I am very optimistic that with this development,our safety and security in the southwest will be guaranteed and criminals will no longer find their ways into the region”,.