The President of the International Bar Association (IBA) Horacio Neto, has said beyond every other thing, the legal profession is all about friendship.

Neto, who was the Guest Speaker for the just concluded 59th Nigerian Bar Association (NBA) Annual General Conference (AGC) at the Eko Hotel and Suites, said the IBA is the tie of friendship.

Speaking at a dinner reception in his honour by a firm of international commercial lawyers and arbitrators, TRLPLAW last Tuesday, the IBA President said he renewed old relationships and made new friends, during the visit.

“I find it interesting indeed, that I met your wife long before I met you. We have been friends for many years; we have worked together on different projects, which are very relevant for the Association. So, Funmi, thank you very much for everything you have done for Africa in the IBA, and for the IBA in Africa.

“Actually the IBA is the tie of friendship, on top of working together, the IBA is about friendship, about commitment, being happy to go somewhere and seeing your friends, it’s about the pleasure of being with your colleagues, it’s about planning, about diversity, it’s about going everywhere and knowing that you have friends in every place; this is the feeling that I have about Nigeria. I have many friends here.”

Explaining the inspiration for the dinner, Prince Oluyede thanked his wife, who he said was the brain behind the hosting the IBA President to a dinner.

He noted the IBA President’s courage for deciding on the Nigerian trip, despite untrue negative information about the country.

“The idea of having a dinner came from my wife, she is the brain in our partnership.

“When they told me the IBA President was coming to Nigeria, I thought it was a momentous event, to have someone like him coming to visit us, notwithstanding the various advisories you get about Nigeria, so we should really thank him, because it (his visit) throws a different light about our country.

“You’re very welcome to Nigeria, we’re so happy to have you in Nigeria, and we’re sure that this will leave you with a great impression of the country and it’s people… I assure you Nigerians are a fantastic people, not just Lawyers”, Oluyede said.

He also commended the NBA President, Mr. Paul Usoro, SAN and his wife, for honouring the invitation to the dinner.

In his response, the NBA President commended Oluyede for his forthrightness, and ability to speak truth to power.

“If you have a difficult case, and you need that Lawyer who needs to stand very firm and tell the Judge ‘what you’re doing is wrong’, then you need a Jibola.

“I have been with him in the trenches, a number of times. One of the most recent ones, was the Bukola Saraki case. Then we needed somebody who could tell the Judge, tell the man that, ‘see, there is a distinction between My Lord and the Chairman of the CCT (Code of Conduct Tribunal)’, and Jibola was there, and not because he was grandstanding, but because he truly believed in the cause.

“He has a way of not only advocating, he lives his advocacy, he believes in advocacy with a passion, and that’s Jibola.”

He praised the couple’s marriage as admirable and exemplary, adding that, “somehow they are yet to tell me how they met, but it is very strange that two people with identical character and traits got married, and their house is not in flames.

“But I congratulate them, I thank them so much for the honour that they have done to our guest, Horacio”, Usoro said.

One of the highlights of the night, was when Ajibola presented a talking drum to Neto.

Members of the Owo Branch of the NBA also presented a gift to Prince and Princess Oluyede, for ongoing support to that Branch. 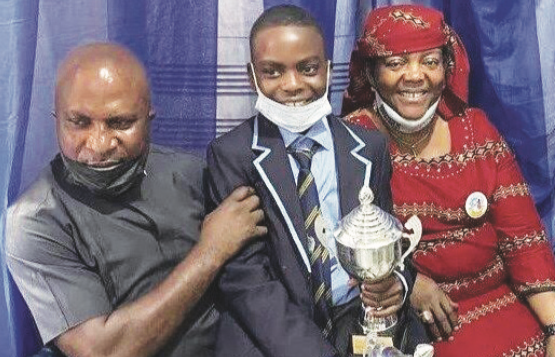