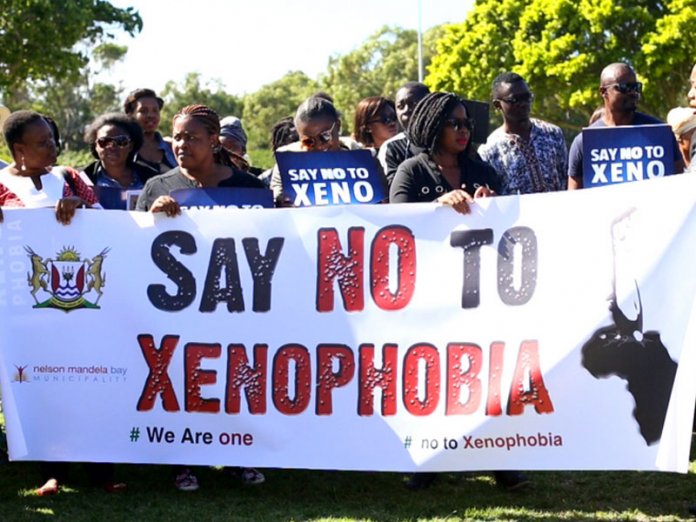 A group of Nigerians Thursday staged a protest at the Nigerian High Commission in Pretoria, South Africa’s capital.

The protesters, mostly victims of xenophobic attacks in South Africa, according to Channels TV, said they are angered by the recent massive looting of foreign-owned shops in the city by some South Africans.

Many of the protesters lamented that they have lost their goods and business investments to the looting spree, which occurred on Wednesday at Pretoria Business district.

The protesters in separate interviews told Channels Television that the protest was needed because they are now feeling unsafe in the foreign country.

They claimed that Nigerian representatives in South Africa were slow towards responding to their plight.

“They came to my shop and burnt everything to zero,” one of the victims told Channels Television.

“We are appealing to our Consulate via the High Commission here to please intervene in this whole situation. We are so unsafe in this country,” another victim said.

However, Defence Adviser, Nigerian High Commission in South Africa, Abubakar Mustapha condemned the protesters for venting anger on the commission by destroying some property.

“The way they went about it (the protest) was quite unfortunate; they scaled the fence and almost destroyed the gate,” Mustapha said, adding that the quick intervention of security officers curtailed the incident.

Nigeria High Commission officers later visited the scenes of the looting spree to see the level of destruction on shops owned by Nigerians.

The acting High Commissioner to South Africa, Umar Bako later assured those who came to complain of their losses that quick actions would be taken to intervene in the matter.

Violence was recorded on Tuesday in Pretoria Business district as South African indigenes who were apparently angered by the killing of a taxi operator by a yet-to-be identified man, on Tuesday resorted to looting shops owned by foreigners in their country.

South Africa police have since arrested 17 people in connection with the looting spree.