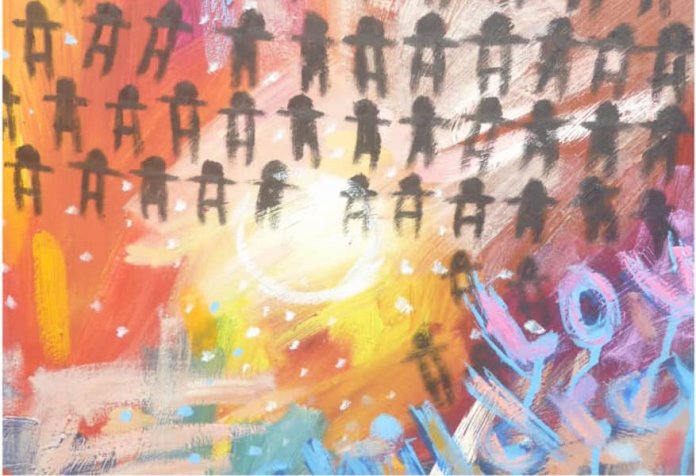 On September 15, the multimedia artist and art scholar, Kent Onah will mark his birthday at the Quintessence Gallery, Ikoyi with a book launch and exhibition which share the same subject matter of art as therapy. Onah, who hails from Delta State is a senior lecturer and immediate past Head of the Department of Painting, School of Art and Industrial Design, Auchi Polytechnic, Auchi where he has taught since 1991.

His expedition into art education has led to several research-based projects such as one that led to his writing a book, titled, “Art as Medicine for Children with Disability in Nigeria.’’ This book, which is the first of its kind, clears the misconception about disability in children and how to treat them using art therapy.

During a press preview of the works in Ikoyi, Onah explained the circumstances that necessitated this book.

From his observations, he realized that children with disabilities are often stigmatized and more often than not, their parents rely on spiritual rather professional help to adjust the children to the society.

“We are prone to quickly assume that whatever happens to us is caused by witchcraft or juju or that some divinity is punishing the parents and the child suffers for this. Instead of them to seek solution to the problem, the child is treated badly. Having known all these, I had to write something to create awareness about art as solution to some of these problems. The five chapters talk about the different disabilities that the children can have and the art remedies. In Chapter 8, I discussed extensively the different kinds of art therapy that children can enjoy based on the data collected,’’ he revealed.

The art exhibition is a continuation of the series in the aforementioned art project that he started in 2012. In it, he has a body of works that speaks to the condition of children living with disabilities.

“One of the striking ones is ‘Trapped’ which is about children being trapped in adult ideologies. A lot of children try to behave like adults. Children are children; their nature is play. They could be naughty but we want them to be adults as such tender age. One is also “Love Children’’. Some people for one reason or another don’t love children especially when they have disabilities. Most of these children are loved at the backyard or inner room. They are not allowed to see visitors or go to school. Even when they go to school, some of them don’t mingle because they are stigmatized. What I spoke about in the book I also painted,’’ he revealed.

Art therapists often use colour in treating specific problems. For instance, yellow affects the cognitive while red is used for psycho-motor healing. Onah sees art beyond its visual charm.

“I have always believed that painting is beyond aesthetics and I have always looked forward to making painting very valuable to people. My art in medicine research dates back to my undergraduate years. It is the first book in art therapy. Incidentally, if you trace art in medicine in Nigeria, you will see that it is only Kunle Adewale who has the direct training. A lot of medical practitioners in Nigeria are still skeptical about the use of art for healing. A few of them had seen this book and are excited about it. We are not claiming to be experts yet,’’ he said.

He added that for the education of a child to be well-rounded, it must have the UNICEF’s tripod of learning which are letters, images and figures. He frowned on the common practice in many private schools where art teachers are forced to teach other subjects alongside art whilst teachers who teach Mathematics and Science are not required to teach more than those assigned subjects. According to him, art demands the same attention as the other core subjects.