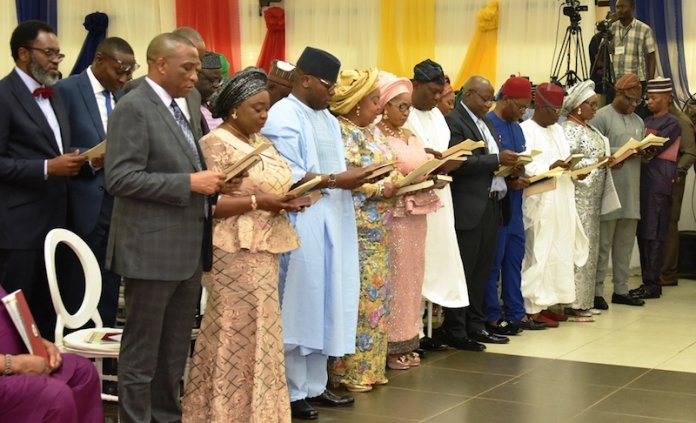 Lagos State Governor, Mr. Babajide Sanwo-Olu, yesterday told newly sworn-in members of his cabinet that the rapid growth and development of Lagos is the primary goal of the government and that they should be prepared to hit the ground running.

The governor, who made this clear during the swearing-in of his commissioners and special advisers, said “we must accelerate the trajectory of growth and development of Lagos State as we can’t afford to disappoint Lagosians.”

Sanwo-Olu at the ceremony held at Adeyemi Bero Hall, Alausa in Ikeja, announced a 35-man Executive Council members, comprising of 22 commissioners and 13 special advisers with their portfolios.

In his speech, Sanwo-Olu, told them: “Today, you are inducted into a singular administration, unique in its diversity – both of heritage and of creed – made up of technical and politically skilled men and women who understand the challenges of our state, grasp the grand vision of this new administration, and are sensitive to the yearnings of our people, the citizens of Lagos State whom we must ultimately serve to realise its vision for a greater Lagos.” “In this administration, our task must be to accelerate the trajectory of growth and development of Lagos State embarked upon by the administration of Asiwaju Bola Ahmed Tinubu and built upon by successive administrations.

He maintained that the foundation of his administration shall rest on six pillars of development, encapsulated in the acronym “T.H.E.M.E.S.” where T is standing for Traffic Management and Transportation; H for Health and Environment; E for Education and Technology; M for Making Lagos a 21st Century Economy; E for Entertainment and Tourism; and lastly S for Security and Governance.

Others are: Executive members of All Progressives Congress (APC), Lagos chapter, led by its Chairman, Tunde Balogun, Body of Permanent Secretaries, Local Government Chairmen, traditional rulers and chiefs, party faithful, family members and well-wishers, among others.

Justice Alogba until his confirmation was the acting Chief Judge of the state.

This confirmation was the only business of the day.