The people should be allowed to elect the governor of their choice, writes Tarila Ebiowie

The great Pythagoras has been quoted as saying that a fool is known by his speech and a wise man by his silence. I do not agree with him completely because not all who talk are fools; and not all who keep quiet are wise. But his conclusion is quite instructive because as Francis Bacon has said, silence, most times, is the sleep that nourishes wisdom. There is also this popular quotation originated by Thomas Carlyle that speech is silver and silence is golden. All these emphasise the importance of silence over noise.

At a certain point in the ongoing governorship campaign in Bayelsa State I had reasons to wonder aloud whether one of the aspirants, ‘Timi Alaibe, had no one who could help him respond to some of the demonic allegations made against him by either sponsored groups and individuals or by the government of Henry Seriake Dickson. A few weeks ago, Dickson’s Commissioner for Environment issued a public statement meant to humiliate Alaibe in its entirety. And all we heard from Alaibe’s camp was silence.

For the records, Dickson is not an aspirant in the coming election. He has served for two terms as allowed by the 1999 Constitution. But his body language is in line with what has unfortunately become an acceptable standard in Nigerian politics where every serving state governor or president arrogates to himself the right to determine who succeeds him. Such undemocratic tradition is to ensure that the hand-picked successor covers up the wrongs and excesses of his predecessor while the predecessor keeps dictating to the successor who to love and who to hate. In Bayelsa State, it is commonplace knowledge that without any interference from anywhere, Alaibe will win the primary of the Peoples Democratic Party cheaply. This scenario bothers Dickson a lot.

So, the silence by Alaibe and the noise from the other camp became a serious worry to some of us, viewed against the background of the words of William Faulkner that you should, “never be afraid to raise your voice for honesty and truth and compassion against injustice and lying and greed (because) if people all over the world…would do this, it would change the earth.” But all of these changed last week when Dickson took one step too far to nail Alaibe. Dickson was said to have held a secret meeting with all the council chairmen and counsellors, not less than 120 of them who are expected to be delegates to the primary election on September 3. Unfortunately, a secret audio recording was made by one of the participants who later leaked it to different social media platforms.

Shocked, embarrassed and even shamed by the leakage, the governor reacted with fury. He put the blame on Alaibe whom he said was embarking on “a sinister blackmail” against him by “circulating a cynically manipulated version of addresses” he delivered “during political meetings and other fora with the intent to blackmail him for assumed political benefits.” One important thing was clear in that statement: Dickson admitted saying those things heard in the tape.

The statement by his Special Adviser, Media Relations, Mr. Fidelis Soriwei was loaded with annoyance demonstrated in use of unprintable words against Alaibe. Perhaps, obviously pushed to the world, Alaibe decided to respond through his campaign organisation’ secretary, Professor Seiyefa Brisibe: “For the records, let it be stated that we as a campaign organisation, take serious exception to the wrong use of tar-brush loaded words and gutter language to describe the person of our Principal with the intent to incite the public against him; particularly over an issue he knows absolutely nothing about. This is unacceptable. Neither Alaibe nor any member of his campaign organisation was at the meetings referred to in the public statement issued on Wednesday. If any of us has access to the recorded discussion mentioned in the public statement, such access can only be traced to the originators of the statement. Our focus is to conduct our campaign on issues that will lead to the development of Bayelsa State through a shared economic prosperity and not waste energy and time on commonplace matters.

“Since the beginning of the search for a successor to Dickson, and in spite of provocative and insulting statements by certain individuals and groups, including serving commissioners in the state, this is the first time we have decided to say enough is enough. Our silence should not be misconstrued to mean timidity, fear or any such thing. It was basically and still a measure of the respect we and our principal have for the person and office of the governor. Unfortunately, that respect has not been reciprocated.

“At the point of expressing interest in this race, we were enjoined by the party leadership to run a clean campaign. We have been faithful to that directive and will continue to be. This is an internal contest in which the eventual choice of the party would need the support of other contestants to win the governorship election. It would therefore be unhelpful to take up issues with anyone as though winning the party ticket is a matter of life and death; certainly not with the governor who is neither a contestant in the race nor expected to sponsor any of the aspirants. Let it be known that we are not desperate but determined to win this race, by the grace of God. We will not allow ourselves to be distracted neither shall we engage in any indecent act or sinister strategies for the sake of this race. We are too focused to be distracted.”

With that audio tape in circulation, Dickson, my countryman governor, will do Bayelsa people a lot of good to allow the PDP primary to elect the people’s choice and not force his personal choice on the people. A word should be enough for the wise. 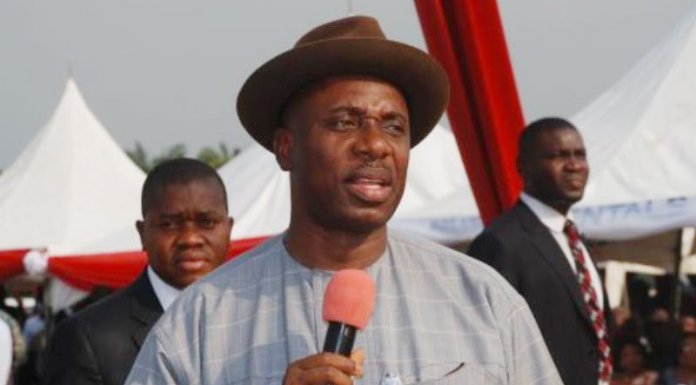