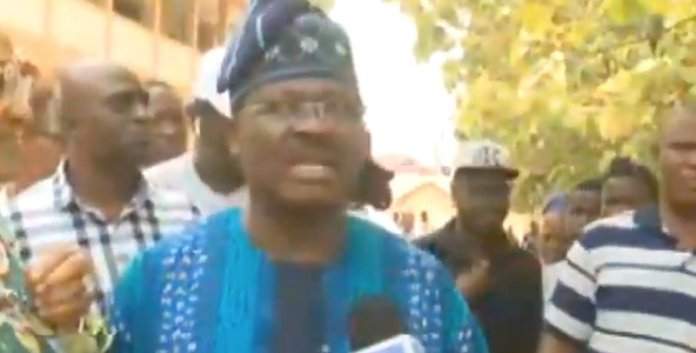 The party, however, commended Oyo State governor, Mr. Seyi Makinde for his outstanding performance under three months he assumed office, saying he had not only brought succour to the people, but had also re-positioned public administration in the state.

The statement said: “We recall that this Ajimobi administration awarded a N7billion contract for a non-existent road and the contractor to whom this hefty sum was paid cannot be traced; this is grand larceny and it is sad that this happened in Oyo State
“We also note the statement credited to the immediate past governor of the state to the effect that the issues of missing government vehicles is a ‘minor issue’ and as such, not ‘worthy’ of the attention it continues to generate.

“We, however, disagree with him and indeed call upon him to give adequate account of all such vehicles in his care as governor. His attempt to whimsically dismiss fraudulent and sharp practices of this magnitude clearly underscores the levity with which the state’s resources were carelessly frittered without respect for due process.

“The Oyo State Government continues to maintain that many of the cars procured in February 2019 by the Ajimobi administration remain missing and such vehicles, in view of their age, cannot be classified and described as unserviceable.

“We, therefore, demand that Ajimobi take due cognisance of what posterity will say concerning him and his tenure and immediately impress on his appointees to return those vehicles back to the government.
“In view of the foregoing, Makinde must do a proper audit of what transpired in the Ajimobi years, as it will help the people of the state to realise how criminal actions were perpetrated under the guise of governance.”

The PDP, however, commended Makinde for adopting a people-oriented style of administration in the state.
“The people of Oyo State are indeed under a new lease of life and this is becoming evidently so in view of the quality of policies, legislations and managerial acumen of Gov ernor Seyi Makinde, which are manifestly being impressed on the people, thereby indicating that it cannot be business as usual,” the party enthused.

It also congratulated Makinde “for bringing laughter to the faces of Oyo State pensioners through his administration’s payment of 100 percent of their emoluments as against the inhuman 20 percent payable under the APC administration of Senator Ajimobi.”
It said the action demonstrated the governor’s respect for the people he governs and that it was also an attestation of PDP’s genuine care for the people.

“The people of the state are certainly in for a dose of compassionate administration, and we also ask the people of the South-West region to take due cognisance of developments in Oyo and now resolve to ensure that we vote PDP in the next round of elections across the zone.”

Reacting to the accusations against the Ajimobi administration, the former governor’s spokesman, Mr. Bolaji Tunji, said the allegations were not only politically motivated but were also baseless.
“My response is based on the fact that there is a firm instruction from my boss (Ajimobi) that we should not respond to things like these that are without substance.

“The truth is that there was no contract awarded under Ajimobi that did not go through due process. I personally, as Special Adviser did not even get an official vehicle. I was using my personal vehicle to run my office.

“Some of the vehicles were assigned to superior officers and did not even go round. If anybody is alleging, let the person come up with facts, with proof, not just saying baseless things, things they cannot substantiate.

“All these are just another case of giving the dog a bad name so as to hang it. The politics of Ajimobi is always issue-based and all the governor’s projects were targeted at improving the welfare of the people,” Tunji said.