Lagos State Governor, Mr. Babajide Sanwo-Olu yesterday told retired senior civil servants in the state that the government intended to build on the good work foundation they had laid in their time. Sanwo-Olu said this when members of Board of Trustees and Executive Committee of the Association of Lagos State Retired Heads of Service and Permanent Secretaries (ALARHOSPS) paid him a courtesy visit in Alausa, Ikeja. The governor said his administration would build on the culture of excellence instituted in the state’s civil service. This, he said, was the best way to build on the legacies of retired civil servants that invested their energies to build the state. “All of you have spent a good part of your active life to build out state at the civil service level. I am sure you will always feel fulfilled when you look back to see all the thoughts, ideas and energies you contributed to building the most vibrant civil service in Nigeria.

The culture you have left behind is what we are building on to make Lagos remain the centre of excellence. “You have set the foundation we are enjoying today. I want to assure you that we will not keep it where you have stopped. We are going to keep the flame burning and build on all you have passed on to us in making the most dynamic civil service earn its pride of place.” He described the body of retired civil servants as “valuable assets” to the State, noting that their actions while in service contributed to the “enviable height” Lagos attained among states in the nation. Sanwo-Olu said the state would continue to draw from the experience of the retired civil servants, adding that the establishment of ALARHOSPS as an advisory body to the government was an indication of the passion the group had towards the development of the state. 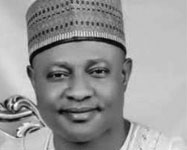 Lessons from Nasir El-Rufai, a True Change Agent, at 60