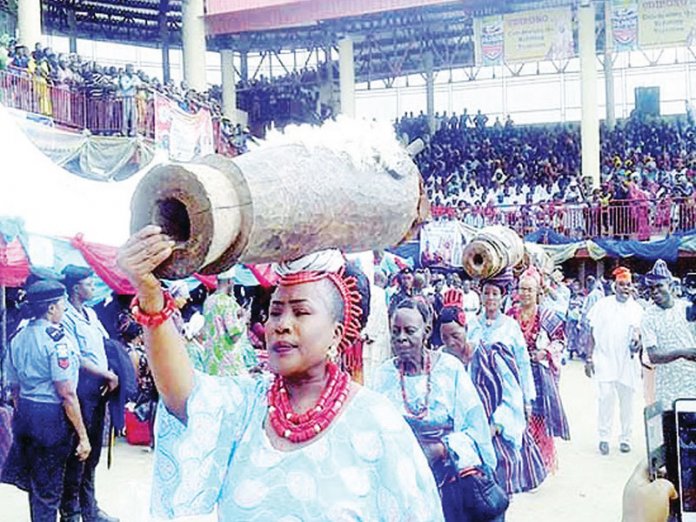 Ado-Ekiti is the cultural destination this season as the indigenes and tourists celebrate the historic Udiroko festival, Yinka Olatunbosun reports

Ado-Ekiti is at the moment the beehive of culture buffs and tourists who are in the ancient city to witness the historic Udiroko festival. The festival which kicked off on August 12 was preceeded by a World Press Conference in Lagos. It was a case of “mountain going to Mohammed’’ as the Ewi of Ado-Ekiti, Oba Rufus Adeyemo Adejugbe Aladesanmi III arrived at Lagos capital to enlighten the media and potential visitors on the historical and cultural significance of Udiroko festival.

The festival had been the preserve of the Ado-Ekiti people in the previous years but that story has changed as this event has grown to become a major annual tourist attraction that will also attract international visitors. This edition has as theme, “Enforcing and Sustaining the Solidity of our History, Culture and Tradition.”

Running till August 20, the festival which signifies the existence of the Ado people in history gets its name from the Yoruba expression that literarily translates, “under the iroko tree.’’ It is regarded as the first day in the Ado calendar dating back to 1300AD when the first Ewi left Ile-Ife in company of his brother and much later, the third Ewi established the Kingdom of Ado-Ekiti by conquest.

Under the Iroko tree was the first meeting ground of the Ado people which explains why this festival is so important to the Ado people. For others, it means shared spirit of independence, liberation and communal unity. It brings economic prosperity to the Ado people.
The Chairman of the Udiroko Planning Committee, Professor Sunday Akindele clarified the misconception about the festival as well as other cultural events of note.

“The essence of Udiroko is to annually remember the historical foundation of the Ado Kingdom. Udiroko has nothing to do with fetish idolatry or secrecy. All our programmes are documented and accessible to everybody. Udiroko is a festival that strikes at the rook of Ado’s historical development,’’ he declared.

Meanwhile, Mr Wale Ojo-Lanre, the Director-General, Ekiti State Council for Arts and Culture, said the state government had partnered with the indigenes of Ado-Ekiti to rebrand the festival, globalise its celebration and seek marketers for the festival.
Ojo-Lanre added that this initiative is driven towards making the festival self-sustaining and to involve Ado-Ekiti indigenes in diaspora as well.

“Since it is within the compass of our purview as a council to inject critical innovations into the original manner of celebrating this festival in Ado Ekiti, we initiated this World Press Conference in furtherance of the strategic marketing of the festival,’’ he revealed during the opening remarks.

The chairman of the conference who is a leading pharmacist and lawyer, Prince Julius Adelusi-Adeluyi gave a good account of himself as an indigene of Ado-Ekiti with some interjections of Ado dialect, songs and light-hearted jokes while also emphasising the virtues of hard work and integrity that Ado people are known for.

His Royal Majesty, the Ewi of Ado Ekiti, Oba Adeyemo Adejugbe Aladesanmi III, described the festival as period to give thanks to the Almighty God and celebrate the remarkable achievements of the Ado people, their cultural heritage and tradition.

“The festival usually starts with Jumat Service on Friday which immediately precedes the first day event of the week-long celebration. It ends with church thanksgiving service, and it is usually rotated annually among the various churches in Ado-Ekiti. These aspects of the annual festival which start and end in prayers in the houses of God clearly indicate that the festival is not fetish by any standard and not shrouded in secrecy.

“Through this festival, we constantly celebrate our ancient past and showcase the rich cultural heritage of Ado people in ways that give currency to the past and precisely situate the present for the productive future. It is our hope that from now on, the Udiroko Festival will gain further international recognition that would propel it amidst its cultural peers in other kingdoms and climes,” he said.

Performances by the students of Theatre and Media Studies, Ekiti State University lit up the conference and set the tone for the festival.