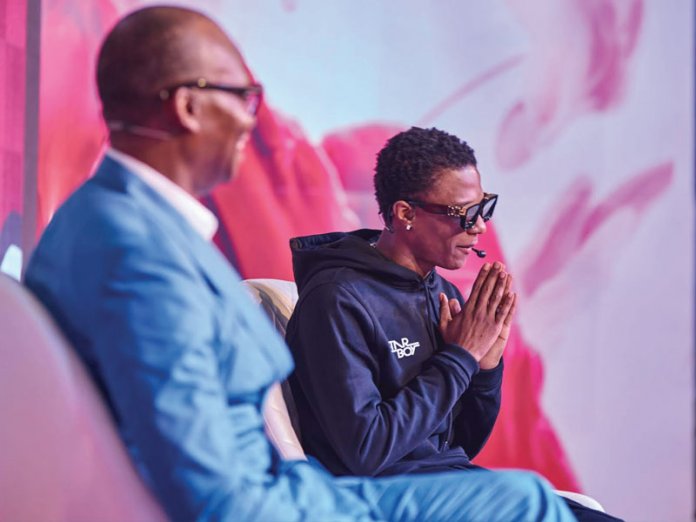 At its recent inaugural marketplace event in Abuja, the United Bank for Africa blended lifestyle with culture as it seeks to unlock prosperity in Africa, writes Solomon Elusoji

Wizkid – Ayodeji Balogun – wore red socks. Although it fitted well with his dark shirt and shorts and bandana, the crowd might not have noticed. When the popstar started to perform ‘Brown Skin Girl’, his recent single with Beyonce, the crowd got more excited and sang along. It was perhaps the best way to end a two-day event that had connected thousands of businesses and entrepreneurs and consumers from across Africa.

The excitement had started some 48 hours earlier, when the inaugural UBA Marketplace opened. The Marketplace was designed to connect vendors from more than 20 countries to consumers and help small and medium scale businesses – the engine of prosperity in any economy – expand their network. Added to the fact that it was held on the sidelines of the Tony Elumelu Entrepreneurship Forum – reputedly the largest gathering of Africa’s entrepreneurship ecosystem – the Marketplace’s impact was expected to be massive. It didn’t disappoint. According to UBA, over 20,000 guests attended.

“I think everyone realises the fact that we need to prioritise the private sector,” UBA Group Managing Director, Kennedy Uzoka said at the two-day event. “We need to encourage entrepreneurship and the African youths. This is the driving factor and the major reason why we are organising an event of this magnitude.”

Uzoka, before the Marketplace event held, had also noted that “UBA has always been at the forefront of entrepreneurship across Africa, undertaking many projects aimed at contributing to supporting Africa’s growth and economic integration. The birth of the UBA Marketplace and this entrepreneurial fair is a testament to our commitment to African SMEs.”

On the first day – July 26 – the vendors set up their stalls at Transcorp Hilton, stocking products from the food, fashion, beauty and home interior industries. The stalls were offered for free by UBA; entrepreneurs only had to pre-register.

The first session of the day was attended by the UBA GMD Uzoka; CEO of Wakanow.com, Obinna Ekezie and UBA Group Head of Retail, Jude Anele, discussed hacks to becoming a successful entrepreneur. After the session, a fashion runway show, parading work from some of Africa’s finest designers took centre stage, while movie lovers enjoyed a private viewing of the new ‘Lion King’ film. At the same time, the Marketplace itself was buzzing with transactions and fun activities; the food court bubbled, the gaming centre overflowed with enthusiastic participants; there was also a kids section, put together by the UBA Foundation. At the RED TV Radio booth, people engaged in giveaways and won lots of things.

The movie session, moderated by UBA’s Group Head, Corporate Communication and Executive producer for the Bank’s REDTV, Bola Atta, deliberated on how entrepreneurs from the creative and film making industry in Africa can benefit from the opportunities in the world of finance.

Afterwards, there was a silent private screening of the ‘The Bling Lagosians’, a recently released Nollywood film.

On the second day, the heavy commerce at the stalls continued. The first panel discussion was between the UBA GMD, Uzoka and Wizkid. Themed, ‘Stars and Suits: Afropop meet High Finance’, it was moderated by media personality, Bollylomo.

During the discussion, which centred around issues regarding finance and the creative industry in Africa, the UBA GMD explained that as a major driver of employment for the youth, the critical role of Small and Medium Scale businesses in the development of any economy cannot be overemphasized.

“UBA is a bank that is interested in the growth of SMEs as well as youth empowerment and we have done many things in the past in this regard,” he said. “We have partnered with the Tony Elumelu Foundation to support the youths across Africa who we know are the future of our continent’s economic renaissance.”
Then, Uzoka announced Wizkid as a UBA brand ambassador.

“Today, we are unveiling Wizkid as our brand ambassador to show our unrelenting support for SMEs and to further create a platform for them to thrive,” he said. “This is a strong collaboration that will help us as an institution to propel our dream of making Africa a truly self-sufficient economy.”

In his response, Wizkid, who sought for increased support of financial institutions for the African entertainment industry, expressed his profound excitement with the partnership, adding that the UBA brand shares his passion to make every child and youth in Africa have the opportunity to thrive.

He said, “It is my passion and my biggest dream to help the youth and to build schools around Africa, and this partnership, I believe, is a step towards that direction; UBA and Wizkid, now let’s change the world.”

Right after the session was another fashion runway show and then a Leo treasure hunt. Leo is UBA’s social media chat robot. Then the Founders’s Den – a pitch session for innovative business ideas – gave budding SME owners and entrepreneurs the opportunity to win prizes.

The final session of the day was ‘Booth to Bank: How the beat becomes the profit’. It was moderated by Folu Storms and included panelists such as entertainers DJ Cuppy and DJ Neptune, producer, Pheelz, and UBA’s Chief Credit Officer, Franklin Erebor. The UBA CCO spoke on how the bank continues to strive to strengthen its relationship with the creative space and the latter’s financing options. The entertainers also shared their music journey and how they’ve managed to stay profitable.

With the panel sessions ended, a concert ensued. DJ Cuppy went first, then DJ Neptune. Fast-rising crooner, Niniola thrilled the crowd with some of her popular songs. Then Wizkid showed up and Transcorp Hilton was submerged in screams.

A GOVERNMENT IN DISARRAY