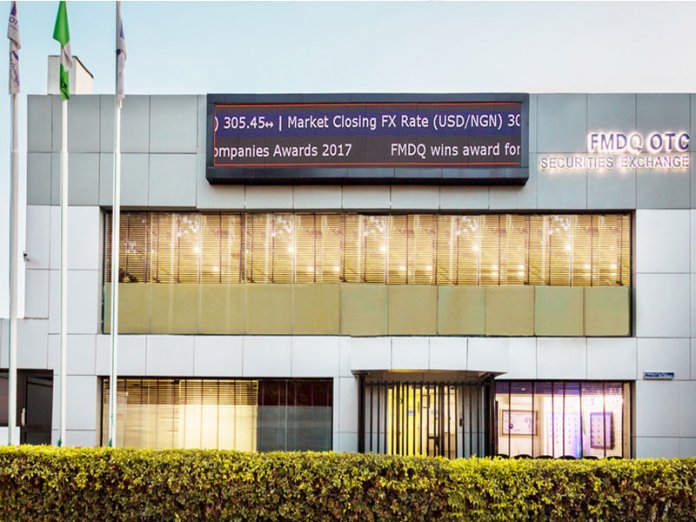 At last, the monopoly enjoyed by the Nigerian Stock Exchange as a platform to trade securities in Nigeria has been broken. Investors now have a formidable alternative in FMDQ Securities Exchange Plc, which recently transited from just an over-the-counter (OTC) platform to a full-blown securities exchange, representing a paradigm shift in the Nigerian capital market. According to a statement by FMDQ, the Securities and Exchange Commission(SEC) has granted it necessary approvals to operate as a securities exchange and it has therefore established FMDQ Clear Limited and FMDQ Depository—its two wholly-owned subsidiaries. Bamidele Famoofo reports

An attempt was made some 19 years ago to establish an alternative platform to the Nigerian Stock Exchange (NSE), where securities and other financial instruments would be traded, but that dream did not see the light of the day as the proposed Abuja Stock Exchange (ASE) failed to thrive.

The then chairman of the ASE Steering Committee, Dr. Shamsudeen Usman, had explained that the planned establishment of ASE was in order to give the investing public and other stakeholders in the capital market another choice and to encourage innovative market creation and development strategies.

Usman who was a deputy governor with the CBN at the time also pointed out that the main objective of founding the Abuja Stock Exchange had never been to replace the existing stock exchange, but to provide “the much-needed competition to better the lot of the Nigerian investor.”

He, however, could not achieve that lofty dream due to what persons close to the deal described as power play between the then head of the NSE, Dr. Ndi Okereke Onyiuke and the promoters of the ASE.

What Usman and other promoters of the ASE could not achieve in about two decades ago, was done a team led by Mr. Bola Onadele.Koko, managing director of the erstwhile FMDQ OTC Exchange Plc in partnership with his board of directors, who successfully changed the status of the company to FMDQ Securities Exchange Plc.

The new status enables the company, which is now a full fledge securities exchange to trade in all securities including fixed income, equities, derivatives, commodities and foreign exchange.

The transition of FMDQ from an over-the-counter (OTC) platform to a full-blown securities exchange, according to financial experts, represents a paradigm shift in the Nigerian capital market. It ends the unwritten mono-stock exchange policy and opens up the capital market to intense competition.

Of course, the transition could not have sailed through without the permission of the Securities and Exchange Commission (SEC).

Sources within The Exchange revealed that SEC approved the amendment of the registration of FMDQ OTC Plc from ‘an OTC Market’ to a full-fledged ‘securities exchange’ in March 2019.

“Following registration of FMDQ Clear Limited by SEC as a clearing and settlement company in Nigeria in November 2017, the company’s clearing house subsidiary became operationalised on January 2, 2018,” Onadele.Koko disclosed in a statement at the 7th annual general meeting of the company held in Lagos recently.

FMDQ explained that the implications of its new status are far-reaching as the careful implementation of the FMDQ Entities – FMDQ Exchange, FMDQ Clear and FMDQ Depository – have not only created robust linkages between hitherto fragmented spheres of the markets, but also presented the market with an efficient, innovative and integrated financial market infrastructure (FMI) group for the seamless execution, clearing and settlement of financial markets transactions.

“Having set the pace in the fixed income, currency and derivatives markets, FMDQ Exchange, as a full-fledged securities exchange, will position itself to cover new markets equities and commodities – in the near- to mid-term,” The Exchange said.

Onadele.Koko said the development of the exchange over the last five years was reflective of the progressive and dedicated strategic leadership provided by its board of directors, as well as the company’s ever-intensifying commitment to proactively deliver value to its stakeholders.

According to him, having successfully consolidated past gains and taken on new frontiers through the operationalisation of a budding integrated FMI Group across the full value chain of the securities market – execute, clear and settle – the Group is poised to enhance efficiencies in FMDQ’s markets to the benefit of market participants.

He noted that it was in view of the resolute affirmation of the FMDQ entities to influence and promote sustainable development in the Nigerian financial market, one which is in alignment with global standards, that a new identity was unveiled.

“As it commences its second lustrum, FMDQ as a one-stop FMI Group with a platform to execute, clear and settle transactions in the Nigerian financial markets, remains committed to collaboratively deliver innovative and forward thinking solutions to the market,” he said.

Registered by the Securities and Exchange Commission, Nigeria (SEC) in 2012, FMDQ operates the largest securities exchange in Nigeria, with an annual turnover of circa $560 billion over the last four years, as well as the only central clearing house, positioned to deliver end-to-end clearing and settlement services that will help enhance the integrity and eliminate the inherent risks to bilateral and multilateral trades settlement in the Nigerian capital market.

FMDQ, Nigeria’s foremost debt capital, foreign exchange and derivatives over-the-counter (OTC) securities exchange and clearing house, offering, amongst other world-class services, an efficient platform for the registration, listing, quotation, noting, trading, order execution, post-trade and trade reporting of fixed income, currency and derivatives products, remains resolute in its goal to keep challenging norms and aims to continue to strive in its pursuit to empower the financial markets to be innovative and credible, in support of the Nigerian economy.

The company’s consolidated profit before tax rose to N7.21 billion in 2018, significantly surpassing the N349.76 million recorded in 2017.

Chairman FMDQ Securities Exchange Plc, Dr. Joseph Nnanna, at the 7th AGM, said the performance could also be attributed to the successful commencement of activities of FMDQ Clear Limited.

He noted that FMDQ OTC Exchange experienced a 58 per cent growth in its securities admission, which was 78 in 2018, compared to 50 admitted in the previous.

On the 2019 outlook for the OTC market, the FMDQ Chairman believed that the successful establishment of its wholly-owned central clearinghouse (CCH) subsidiary, FMDQ Clear, in 2018 the Company will focus further on strengthening further the clearing and settlement franchise operationally and strategically, and enhance its readiness to operate a full-fledged central counterparty (CCP) in 2019.

He noted that 2018 was the year in which FMDQ consolidated its business offering, by extending it from just the provision of a trading venue for execution, to the clearing and settlement spectrum of the securities transaction cycle.