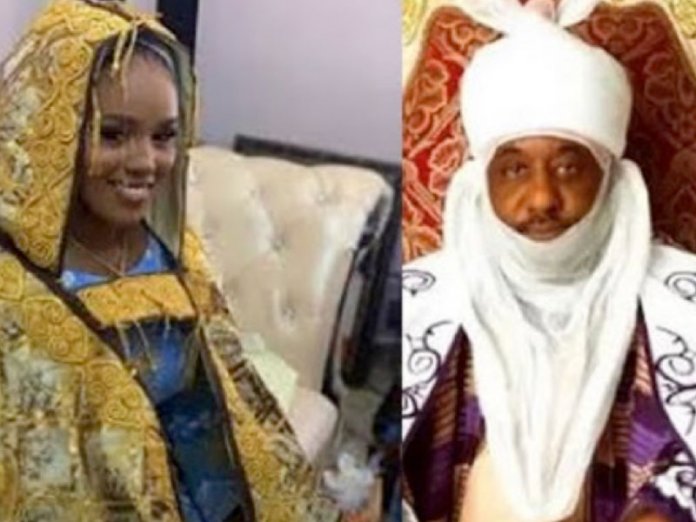 History tells us that the most dangerous adversary for a hero isn’t a rival for power or supremacy, a belligerent, well-fortified kingdom, or even his inner demons. The most dangerous adversary for a hero is a beauty. They come quietly, thieves without arms, and charm the mightiest of men into submission. With soft voices and clear delicate skins, features that can overthrow cities, never mind mortal men, they turn swords and shields to flowers and mellow rough men into gentle lovers.

And if there must be an interlude between acquiring a damsel and possessing her, so be it. Absence only makes the heart grow fonder, and Emir Sanusi’s heart has certainly been longing for the woman of his nightly dreams for four long years. An eternity, some would say, but no matter. The hero has finally got his bride.

Four years after a quiet wedding which took the entire social establishment by surprise, HRH Sa’adatu Barkindo Mustapha, the fourth wife of the Emir of Kano, HRH Muhammadu Sanusi II has finally moved into the palace last Saturday. The Budar Kai ceremony, however, took place the next day.

A cursory observer might wonder what is special or new a husband of three wives could ever hope to find in a fourth; especially a fourth who, at just 22 years of age, must be considered very young in certain circles. But to ask would be to discount the mysterious works of Cupid’s bow. The shot is fired and the darts wing their way intricately, easily passing through flimsy defences and not even the hero of the North could mount a countermeasure.

Well, all that is history. The secret wedding of four years ago, contracted when the bride was 18 and a secondary school-leaver, has morphed into the blissful matrimony of today to a beautiful graduate from a university in the United Kingdom nursing high hopes for a happy lifetime with the paramount ruler of Kano Emirate.