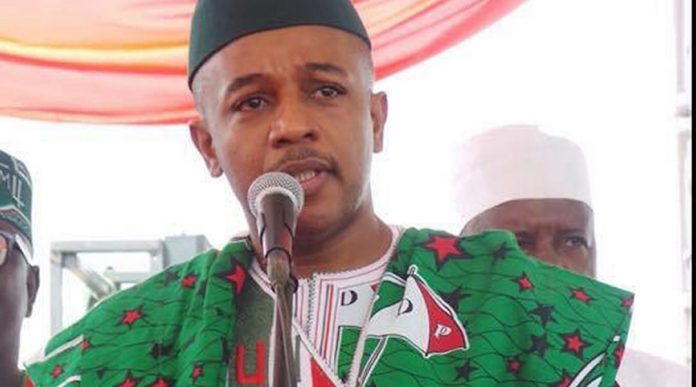 By Laleye Dipo in Minna
A Peoples Democratic Party (PDP) chieftain in Niger State, Alhaji Umar Mohammed Nasko, has called on the federal government to release all pro-democracy activists detained by security agents across the country.
Nasko, the governorship candidate of the PDP in the March election in the state, made the plea in his Sallah message to the people of the state  during which he said continued detention of the activists in a democratic setting is an aberration.
He said governments at all levels needed to “tolerate stiff and virile opposition, maintain law and order and set out measures to tackle banditry, criminality, ethnic tension and unnecessary tension in the land”.
The PDP governorship standard-bearer said what Nigeria and Nigerians needed at this critical time in the nation’s history “are good governance, jobs, quality education for the children and a safe and secured environment for business to thrive”.
On the controversy generated by the federal government’s suspended Ruga settlement programme, Nasko described it as “an unnecessary distraction which should not have raised nerves if government had managed it well and stakeholders’ inputs are well sought and adequately captured”.
“Ruga is a by word for transit camp, this has been since time immemorial, but government can do better in future by communicating well with the public,” he said
Nasko, who described himself as a democrat, assured his teeming supporters that he would continue to strive for the reclamation “of my stolen mandate through all legal means”.
“This is one reason why after the elections I approached the election tribunal to tender all issues relating to forgeries and electoral malpractices witnessed in the last election, I am  confident that in no too distant time, our mandate to lead Niger State will be restored,” he said.
He called on Muslims to be resolute in prayers as they mark the Eid-el-Kabir, adding that: “It is by divine intervention that the problems facing the country will be overcome.”
Nasko also urged the Muslim Ummah to pray for the country’s pilgrims in the holy land, especially their safe return to Nigeria.