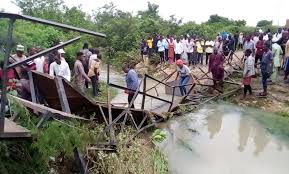 Following the tragedy that led to the death of three students of the Abubakar Tafawa Balewa University (ATBU), Bauchi, due to the collapse of an iron bridge linking the classes with the hostels at the Gubi Permanent Campus, the Nigerian Army has taken up the responsibility of constructing a standard bridge over the stream within the next one month.

Also, the UBA will construct another bridge and access road in another location of the university.

THISDAY reports that Bauchi State Government is to construct a road network within the campus while the Nigerian Air Force has offered to contribute to the development of the campus in order to make learning easier for the students considering the location of the permanent campus in Gubi.

Making these disclosures, the Vice Chancellor of the University, Professor Mohammed Abdulaziz who addressed newsmen on the update of the disaster stated that since the incident, many corporate groups and individuals have indicated interest in coming to the aid of the University.

The VC added that already corpses of the three dead students have been transported to their respective places for burial confirming that one of the dead students, Salamat had been buried in Abuja.

As a way of consolation to the families the University has offered direct to qualified members of the bereaved families at a lower cost among other things that will be done by the University though it is not in any way paying for the lives that have been lost.

While sympathizing with the families that lost their children in the unfortunate incident, the VC assured that the University has put in place measures to avoid reoccurance of such disaster in the future.

In her address, the Pro-Chancellor and Chairman of the ATBU Governing Council, Ambassador Nimota N. N Akanbi lamented that the disaster has naturally thrown the University community into grief of unimaginable magnitude adding however that,  “as believers in the faithfulness of Allah, we cannot but thank Him for the limit of the catastrophe. It would have been worse if larger number of our students were leaving the campus for their hostels after reading overnight to prepare for examination “.

The Pro-Chancellor said that the University has already constituted a Seven man committee to carry out thorough investigation on the causes of the incident, recommend ways to improve safety on the campuses, ways to avert future occurance and to submit its report a week from the date of the letter.

Nimota Akanbi who wore black attire as a mark of mourning also said that, “I am to assure you that we would do honest, sincere and critical self-examination and appraisal as preliminary roadmap to preventing future occurence”.

She added that, “our hears are with the parents and guardians of our beloved students who lost their lives in the unfortunate incident. May Allah bless you with the strength to sail through this tough time and situation. Please know that you are there in our prayers and thoughts. We hope to meet them shortly”.

While appreciating the Nigerian Army, Nigerian Air Force, UBA, Bauchi State Governor, Senator Bala Muhammad Abdulkadir, the Emir of Bauchi, Dr. Rilwanu Suleiman Adamu and other individuals and corporate organizations for their prompt response to the disaster, the Pro-Chancellor expressed optimism that the immediate action is to reconstruct the bridge by using reputable engineering firms so as to bestow to the University a bridge of global standards that would withstand torrents of heavy downpour that are direct consequences of global climate change.