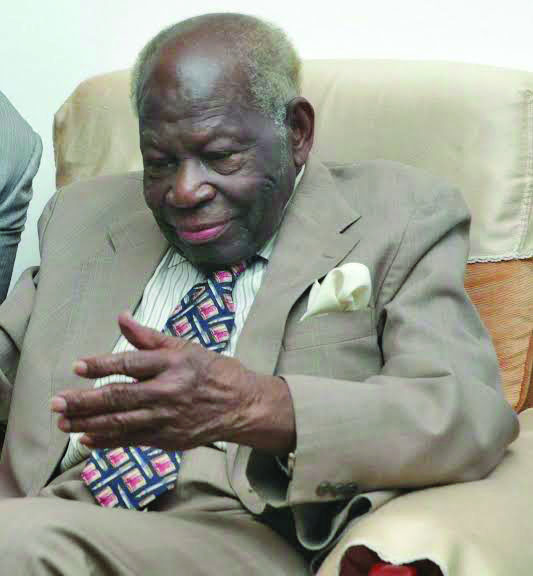 Akintola Williams was born on August 9, 1919 into the family of Thomas Ekundayo Williams, a clerk in the colonial service, who later trained as a legal practitioner in London and set up his practice in Lagos.

In 2009, he lost his wife of 60 years, Mabel Efuntiloye Williams with whom he had two children, Tokunbo and Seni.

The young Williams had his education in the early 1930s at Olowogbowo Methodist Primary School, Bankole street, Apongbon, Lagos Island, Lagos, and CMS Grammar School, also in Lagos. The bright young man then went to Yaba Higher College on scholarship of UAC, and obtained a diploma in commerce.

He moved overseas to England in 1944 to studied Banking and Finance at the University of London where he graduated in 1946 with a Bachelor of Commerce. He qualified as a chartered accountant in England in 1949.

Akintola Williams returned to Nigeria in 1950, and served with the Inland Revenue as an assessment officer until March 1952, when he left the civil service and founded his firm, Akintola Williams & Co. in Lagos. Records show that the company was the first indigenous chartered accounting firm in Africa.

In those days, the accountancy business was said to be dominated by five large foreign firms, with a few small local firms that were certified but not chartered accountants.

The growth path of the company became set with its first partner, Charles S. Sankey appointed in 1957, followed by a Cameroonian, Mr. Njoh Litumbe, who contributed to the firm’s expansion. Litumbe opened branch offices in Port Harcourt and Enugu, and later led the firm’s expansion overseas in 1964, opening a branch in the Cameroons, followed by branches in Côte d’Ivoire and Swaziland, and affiliates in Ghana, Egypt and Kenya. By March 1992, the company had 19 partners and 535 staff.

Demand grew as a result of the Companies Act of 1968, which required that companies operating in Nigeria formed locally incorporated subsidiaries and published audited annual accounts. The drive in the early 1970s to encourage indigenous ownership of businesses also increased demand. The company acquired a computer service company and a secretarial service, and in 1977, the company entered into an agreement with Touche Ross International based on profit sharing. Williams was also a board member and major shareholder in a number of other companies. He retired in 1983.

Williams has deep roots in the development and growth of financial and other institutions in the country. He participated in founding the Nigerian Stock Exchange and the Institute of Chartered Accountants of Nigeria, where he was the first president. This was a projection of a leading role he played in 1960 in establishing the Association of Accountants in Nigeria, which goal was to train accountants. He was also the association’s first president. Regardless of old age, he never lost touch with these organisations. At a stock exchange ceremony in May 2011, he called on operators to protect the market and ensure there was no scandal. He said that, if needed, market operators should not hesitate to seek his advice on resolving any problem.

Williams served Nigeria in several positions, including Chairman of the Federal Income Tax Appeal Commissioners (1958–68); member of the Coker Commission of Inquiry into the Statutory Corporations of the former Western Region of Nigeria (1962); member of the board of Trustees of the Commonwealth Foundation (1966–1975); Chairman of the Lagos State Government Revenue Collection Panel (1973) and Chairman of the Public Service Review Panel to correct the anomalies in the Udoji Salary Review Commission (1975). He also served in other spheres of human endeavor, including as President of the Metropolitan Club in Victoria Island, Lagos, Founder and Council member of the Nigerian Conservation Foundation. The Akintola Williams Arboretum at the Nigerian Conservation Foundation headquarters in Lagos is named in his honour. He was Founder and chairman of the board of Trustees of the Musical Society of Nigeria.

Williams received many honours during his long career. In 1982, he was honoured by the Nigerian Government with the O.F.R. He undertook another project after his retirement in 1983. His new project was to establish a music centre and concert hall for the Music Society of Nigeria. In April 1997, Williams was appointed a Commander of the Most Excellent Order of the British Empire for services to the accountancy profession and for promotion of arts, culture and music through the Musical Society of Nigeria. On the 8th of May, 2011, the Nigeria-Britain Association presented awards to John Kufuor, past President of Ghana, and to Akintola Williams, for their contributions to democracy and development in Africa.

Akintola Williams also engaged in socio-cultural activities in his early days. He was one of the founders of the Egbe Omo Oduduwa society when he was in London. The society had Dr. Oni Akerele as its President and the late Chief Obafemi Awolowo as Secretary.