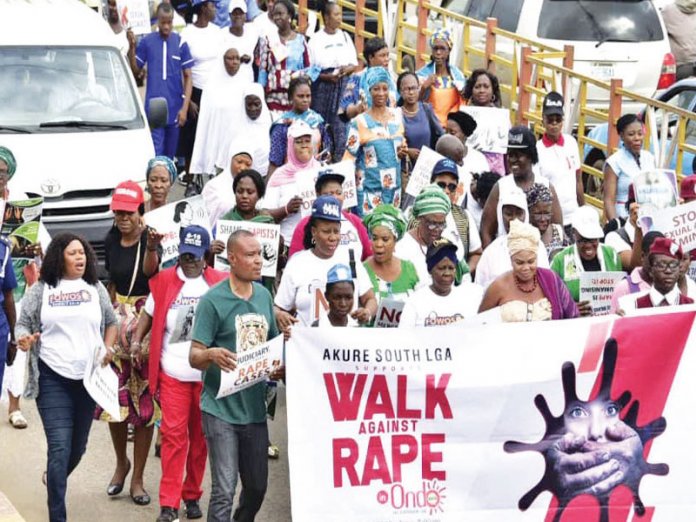 “Well done mama, well done Arabirin, you are doing a good job and God shall reward you for various good things you are doing in Ondo State. Let all parents, religious organisations and interest groups support Arabirin and say no to rape.”

These and others were some of the statements of market women commending Mrs Betty Anyanwu-Akeredolu, wife of the Governor of Ondo State, Oluwarotimi Akeredolu, as various stakeholders were walking through the popular Oyemekun/Adesida Road with placards condemning rape and other forms of sexual abuses of ladies and minors.

The exercise tagged “Walk Against Rape”, was part of the advocacy strategies to combat cases of rape of minors and all other form of sexual abuses of children initiated by Anyanwu -Akeredolu.

The walk was a follow-up to the stakeholders meeting held to kickstart the war against rape and came barely a week after the First Lady of the Sunshine State, convened the parley.

The First Lady among other incidents, was particularly touched by the recent pathetic cases of two girls of ages six and seven, who were defiled at Ode- Irele and Owo areas of the state.

She said: “The defilement of a-six year old at Ode-Irele and a seven year old at Owo were worrisome and we don’t have to keep quiet. When I heard these cases, my heart was broken. We will break the bureaucratic bottleneck that has been responsible for the previous delay in handling of such cases.”

The stakeholders, who spoke extensively against the dastardly act that has taken another dimension, expressed their readiness to support the wife of the governor on measures that she may take to curb the practice of such wicked acts.

Therefore, embarking on sensitisation and enlightenment programmes on what parents need to do to protect their female children from ” hawks” that may want to take advantage of their interaction with female gender, was one of the major strategies adopted at the meeting.

In pursuance of the strategy, stakeholders gathered as early as 8:00am at the palace of the Paramount Ruler of Akure Kingdom, the Deji, Oba Ogunlade Aladelusi Aladetoyinbo for the commencement of the walk expected to take place in all the 18 local government areas of the state.

Armed with placards of various inscriptions, participants marched from the palace through the popular Oyemekun/Adesida Road to the A Division Police Station, condemning rape while market women were eulogising the initiator of the programme.

Some of the inscriptions read: ‘Rapist Should Rot in Jail’, ‘Rapists Are Animals’, ‘No Mercy For Rapists’, ‘Save My Dignity’, ‘I am your Daughter and Judiciary Should Fastrack Rape Cases’, ‘Do Not Hide Rapists, Speak Out’, among others.

Addressing participants, Anyanwu- Akeredolu said everybody must come together to speak and take action against rape.

The first lady , who was represented by the Commissioner for Women Affairs and Social Development, said the dastardly act had reached an alarming level that requires the support of all stakeholders to stem, called for a stiffer penalty for any person that engages in sexual abuse.

She pointed out that raping of minors is a problem living with the people in their various localities, adding that all and sundry must have their hands on deck in tackling the menace.

Similarly, Mrs Aderoju Oluwatuyi, the wife of the state Commissioner for Natural Resources, said that the essence of the walk was to fight rape in the state.

Oluwatuyi thanked the governor’s wife for her initiative to curb the unnecessary sexual harassment to womenfolk in the state.

She added that the trauma felt by rape victims was killing, asking for stiffer punishment for rapists.

Also speaking, the Erelu Iyaloja of Akure Kingdom, Chief Mercy Adekanye, tasked parents to train their and rise up to their responsibility and devote time for them.

While addressing participants in his palace, Oba Aladetoyinbo, who expressed deep concern about increase in rape incidents, asked the people to bring rape suspects to his palace for punishment.

The monarch said the spate of rape cases has reached alarming level that all hands must be on the deck to checkmate it. Aladetoyinbo also advocated life imprisonment for any person convicted of rape case.

As a traditional ruler, the monarch said the institution was ready to introduce traditional punishment to erring person or persons.

He said: “Bring any person suspected of rape to the palace. We have special water that we shall give to the suspect. Once the person drinks the water, the curse shall be on him for life.

” You don’t have to catch the person in action, once you suspect anybody, we shall make him to drink the water before we hand him over to the police for proper action, but I will first deal with the issue.

I am also advocating that rapists should be sentenced to life imprisonment.”

The monarch, who decried the rate of rape, said the traditional institution shall condemn the scourge under any disguise. Stating that the palace is in support of the initiative, he added that the women should continue to protest until no rape case happens in the state.

He appreciated steps being taken by the first lady towards protecting underage girls against sexual abuse in the state.

The only female lawmaker in the state House of Assembly, Mrs. Favour Tomomewo said the time to enforce anti-rape law is now, adding that there is no more mercy for rapists.