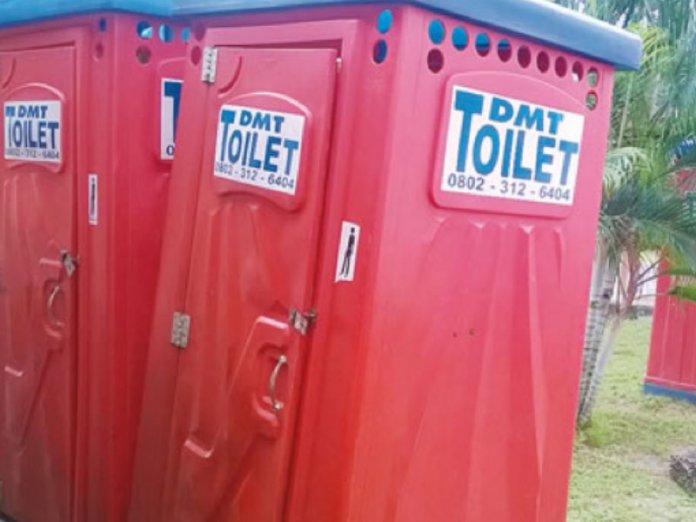 Where to defecate has continued to be one of Nigeria’s environmental issues, thereby placing the country at second position after India in Open Defecation. In this report, Kuni Tyessi takes a look at how ‘shit’ business has continued to put food on tables, as well as settle numerous bills

There was a long queue that led to the toilets, serving both male and female travelers which were however divided into two quarters of three each, to serve gender differences, provide security and for the maintenance of dignity. A lady in her mid- twenties stood by the entrance of a privately-owned building housing six toilets.

She had a male colleague who stood at a second entrance and attended to the men. She had a waist bag strapped around her waist and every individual who had cause to answer nature’s call handed over some cash to her. For some, she briskly searched the bag and gave them change while for others, she kept the money in the bag with an approval that they could use the toilets.

Inside the toilet was a narrow passage which accommodated two giant drums of water which were each connected to a pipe with hose of moderate length that allowed the flow of water. There were also three buckets, serving each of the toilets and small bowls which were used in fetching water from the drums for flushing after use.

This was at a vicinity of a popular moderate eatery called ‘Vincents’. It is located on the ever busy Lokoja highway in Kogi State which serves as a major route connecting the Southern part of the country to the North.

The setting seemed rowdy but every traveler had a target to be achieved within the shortest period of time given to them by the drivers who were going to different destinations, but had arrived the place almost at the same time when others had left and some on their way. There were six buses of different travelling agencies parked at the location.

While some quickly took meals and did the ‘shit’ business inside the restaurant for free, as a result of their patronage which came as a bonus, others bought snacks outside the restaurant and had to pay to engage in shit business.

“Na which one you wan do?” the lady with the waist bag inquired in pidgin, a local parlance which means ‘which one do you want to do’?

“I wan shit, my belle dey pain me (I want to defecate)” came the reply from a female traveler whose turn it was to use one of the toilets.

“Your moni na fifty naira (your money is N50)”, the former replied.
“What if na piss peson wan do nko (what if I want to urinate?)”, another lady traveler had inquired.
“Na thirty (pronounced as taty) naira you go pay. (You have to pay N30).

Rekiya Oiza Abdusalami, an Ordinary National Diploma (OND) holder is the lady who collects the money from the toilet users and gives them a piece of tissue paper to clean up. She revealed that taking care of the toilets had been made easy with the availability of water as a result of a borehole which was sunk by her employer, whose name she will rather not divulge.

In terms of profit, she said the sum of between N7,000 and N12,000 was the amount that could be realised on a daily bases if there were many travelers, in a business that many had erroneously judged to be debasing with claims that it depersonalises, and can only be done as a last resort and by people who have chosen to engage in legitimate work in order to fight the ‘Siamese twins’ -poverty and crime.

She confessed that initially, she had looked down on the job when it was offered and had almost rejected it as a result of the shame and likely stigmatisation that could follow. But looking back and realising how far she had come, she acknowledged that it could only have been God.

“By then, I didn’t want to do the work. I was ashamed and was worried that people who know me or my school mates might one day travel and come here and see me doing toilet business, of all businesses. But when I could not get a job even though I had applied in many places and people had promised me, I decided to consider this one.

“When I started, I was very sad and will always pray to almighty Allah to not allow anybody that knows me to come here. People knew that I was working but I don’t tell them where. I will just say that I work somewhere in town. But with time, when I saw the profit we are making in the business, my eyes opened, I became happy and it is that happiness that has been helping me to want to come to work everyday day and also in taking care of the toilets for our customers. I am proud to tell people that I do shit business. I don’t need to follow men and I don’t need to beg for money.

“Right now, I am saving money which I will use to further my studies and even if nobody supports me, I can beat my chest and say that I will be alright. This is my second year here and after my HND, I will do toilet business. And looking back, all I can say is alhamdulillah.”

Mr. Jacob Fateye, another person in the shit business profession who runs his in Bodija Market, Ibadan, Oyo State, agrees with Rekiya in terms of profit. He said after his retirement in the services of the Ibadan North Local Government as an environmental sanitation officer, his sojourn into the business could only be divine as he has used it to feed his family, pay bills and most importantly, serve humanity.

Also, a block of toilets, the only one in the market which is also privately owned, 56 years old Fateye said he can make up to N2,000 daily. As his means of livelihood which he doesn’t joke with, or take for granted, the facility is all encompassing and Persons Living with Disabilities (PLWD) have also been captured in the construction of the facilities.

To imagine that people have been able to conceive dreams in the midst of myths on how to turn ‘shit’ to cash and have had the boldness to run with it, is not only commendable but advisable and in the face of real life hardships, battered and suffocating economy, as well as creating a new image for Nigeria among the polity of nations towards ending Open Defecation.
Also, to note that Kogi State is situated in the North-central of the country, and the highest amongst the 36 states in Open Defecation, which has placed the region atop the chat of OD with a percentage of 53.9 (an equivalent of 16 million people), as well as the South-west which closely tags after the South east with a percentage of 20.4 cannot be over emphasised.

United Nations Children’s Fund (UNICEF) Water Sanitation and Hygiene (WASH) Specialist, Bioye Ogunjobi in his paper titled “Clean Nigeria: Use the toilet”, said the campaign in collaboration with the European Union (EU) to end Open Defecation and encourage the use of toilets is apt.

As an unconscious advise to all humans (we all defecate), more importantly to ‘shit’ business owners, Ogunjobi disclosed that naturally, ‘shit’ is oily and just water without soap or ash cannot completely make one’s hands clean after washing, thereby presenting other health challenges. This also serves as an exhortation for more shit business acumen, as most public toilets especially in semi-urban and rural areas are bereft of soap or ash for washing of hands after use. This might have been an oversight or ignorance- related.

Rekiya and Fateye have not only succeeded in demystifying the lucrative and self-employed business, but have triumphed in beaming the searchlight towards opportunities which seem non-existent. Rather than remain jobless or wait for farce white collar jobs, they have swallowed the toga of mental laziness and have been healed economically as all humans must actively or passively engage in ‘shit’ business.