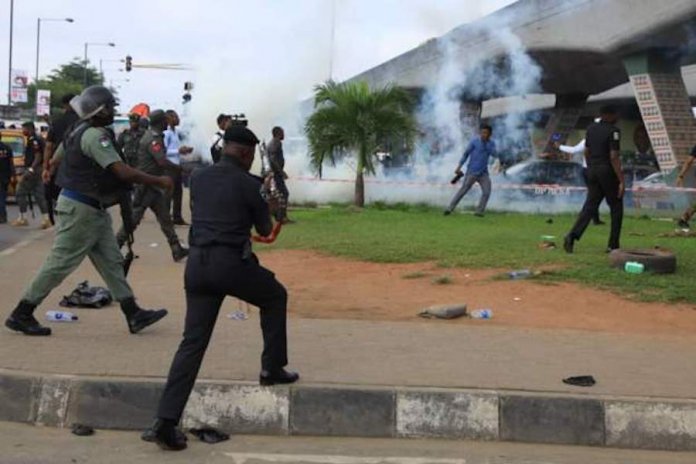 Sonnie Ekwowusi argues that peaceful protest is protected by the law

It is hard not to be exasperated in this perilous time that tries men’s souls. Never has it been this bad. Even during the dictator Sani Abacha military era the citizens, unlike now, were relatively secured going about their normal businesses. Never has Nigeria been so challenged on all fronts – politically, economically, culturally, morally- and, of course, security wise. We are seriously enmeshed in a complex existential crisis. I have just finished listening to the interview of Chiemela James Iroha, the son the New Masquerade actor – Gringory Akabogu – who was recently kidnapped.

He and others were inside a commercial vehicle travelling to Lagos when suddenly some Fulani herdsmen emerged from the bush and started raining bullets on their vehicle. Eventually, the Police succeeded in rescuing them. He said that he was so sure that their captors were Fulani herdsmen. He stated that prior to the arrival of the police the killer herdsmen had embarked on a one-hour shooting spree along the expressway. In his own words: “Is horrible where this country is driving at”.

This insecurity challenge and other ills confronting us in the country have prompted thousands upon thousands of Nigerians to begin to clamour for a people’s revolution in reminiscent of those that have brought positive changes in other countries. Expectedly Omoyele Sowore, the convener of the #RevolutionNow# had been picked up by the DSS over the weekend. Yet the persistent outcry for a revolution in the social media and other public fora has continued unabated. What this means is that the issue at stake really goes beyond Sowore: the issue at stake is an existential crisis directly afflicting the average Nigerian.

Rather than enthrone good governance in order to stop public protests, the Buhari government is forcefully clamping down on the peaceful protestations. In my humble view, this is a wrong approach to the problem. To begin with, as the Presidency has recently rightly admitted, the right to peaceful assembly, peaceful protest and civil disobedience is a guaranteed right of the citizens. It is a guaranteed right in the 1999 Nigerian Constitution, African Charter on Human and Peoples Rights, Universal Declaration of Human Rights and other international covenants. It must be noted that that word revolution is elastic. It does not necessarily imply a violent overthrow of the pre-existing legal order. The notion of revolution includes a rejection of a government. Sowore’s #RevolutionNow#, in my view, is calling for a change from bad governance to good governance. It is not aimed at overthrowing the Buhari government. In any case, many non-violent protests had been staged in the last few years against the Buhari government. For instance, last year the eighth National Assembly protested against President Buhari for withdrawing and spending a gargantuan $496million in the purchase Super Tuscano Embracer fighter jets without the approval of the National Assembly as enshrined in our constitution. Under the aegis of One Voice Nigeria (#iStandwithNigeria) thousands of Nigerians including Nollywood actress Mercy Aigbe and Charlie Boy Oputa started a revolutionary protest around the National Arts Theatre, Iganmu, Lagos demanding that President Buhari must go. Two weeks earlier, Nigerians in London trooped out en masse to stage a protest demanding that President Buhari must go. Olusegun Obasanjo, Ibrahim Babangida and T.Y. Danjuma also protested demanding that Buhari must go. The Anglican Church in Nigeria also wanted Buhari to go last year. Seethed with anger over the killing of two Catholics priests and dozens of church worshippers in Benue State, the Catholic Bishops of Nigeria under the aegis of the Catholic Bishop Conference of Nigeria (CBCN) took to the street demanding that President Buhari must quit because he had plunged the nation into chaos and because he failed to protect the lives and property of the Nigerian citizens. The bishops, fully attired in their robes, wielded placards that read, “Life is a precious gift from God”, “Male and Female He created them….” That was the first time in the history of Nigeria that the Catholic bishops were trooping into the street to stage a protest against a Nigerian political leader.

The preceding clearly illustrates that we are already used to non-violent protests against the Buhari government. So, the protests are not surprising to us anymore. What is rather surprising is that whereas the Fulani herdsmen killers and Miyetti Allah are committing all sorts of atrocities and getting away with them, the security operatives are sent after innocent citizens exercising their freedom to peaceful assembly as guaranteed in our 1999 Constitution. Why hasn’t the Buhari government dispatched the DSS to arrest the leaders of Miyetti Allah and Fulani herdsmen in Nigeria and try them for treasonable felony? The impression being conveyed is that we have two criminal justice systems under Buhari government, one for Miyetti Allah and killer herdsmen who are above the law of the land, and another for the people of Nigeria who are facing the wrath of the law. If not, why should a group of illiterate cattle men take the law into their hands and the Buhari government prefers to look the other way whereas Nigerian citizens staging peaceful protests over bad governance are hounded and are threatened with treasonable felony? Even RUGA Settlement which is aimed at empowering the Fulani herdsmen, most of whom are foreigners, is a big threat to Nigeria’s territorial sovereignty in violation of Section 2 of the 1999 Constitution.

Beyond peaceful protests, the resistance to bad governance we are witnessing in Nigeria today is a resistance of the human spirit. And you cannot stop the human spirit especially when it is embarking on a mission for which it is destined to accomplish. That was why the Catholic clerics spontaneously took to the streets of Abuja and Enugu respectively last week over the murder of Rev. Fr. Paul Offu, a parish priest of St. James the Greater Catholic Church, Ugbawka, Enugu State. Fr. Offu is said to be murdered by suspected Fulani herdsmen. Also last week some gunmen now confirmed to be Fulani herdsmen abducted a lady pastor of the Redeemed Christian Church of God (RCCG) and four others at the J3 Ogbere-Ijebu-Ode (Ogun State, stretch of Lagos-Ore Expressway, not far from where Mrs. Funke Olakunrin, the daughter of Fasoranti was killed by the Fulani herdsmen recently.