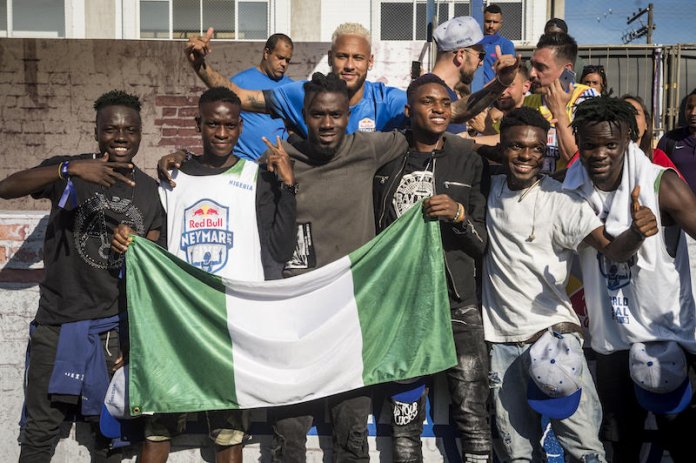 While Nigeria toiled at the African Cup of Nations in Cairo, another team of footballers strove to do their country proud in the world’s football mecca, Brazil, Ayodeji Rotinwa writes

AK Marvelous, the Nigerian team was minutes away from a possible elimination.

Under Sao Paulo’s glowering sun and in just under 20 minutes they had played two games. Their first game against Kenya ended in 3-0 victory.

Then, they decide to watch their next opponents, Neymar Jr. Five, court-side, play ahead of their second game against them. This team was a special selection of players from different countries. A dream team if you will. But they were losing. They had gone five goals down against Brazil. The Nigerian team was confident they would defeat them. They exchanged assurances amongst themselves that the team was a walkover. They laughed as their soon-to-be opponents conceded goal after goal.

After the defeat, the Nigerian team headed for the bleachers. At first, an argument threatened to break out amongst them. Blames were being traded. The leader of the team, Teslim Ayomide immediately shut it down. He acknowledged they had taken their opponents for granted. He gathered his team in a circle. He calmly pointed out where everyone including himself had made mistakes. He asked for ideas on how they could beat their next opponent, Brazil, supposedly the best technical team in the competition. If the did not win, they would not progress to the next round.

“That was the best part of the tournament for me. The motivation. The talks. The adrenalin. We didn’t care who we were playing next. We knew we had to win,” recalled Lukman Olagoke, one of the team’s players.

Around the Nigerian team, other teams – 42 of them, from across the world – played, won, lost, strategised against opponents, screamed at each other.

The teams had travelled to Brazil for the Red Bull Neymar Jr tournament, the biggest five-a-side competition in the world, now in its fifth edition. It is held at the Instituto Projeto Neymar Jr, a football institute set up by Neymar and his family, in Praia Grande, a beach side municipality in São Paulo. Neymar is one of the biggest footballers in the world, and Red Bull, the biggest energy drink company in the world, that promises to give its drinkers “wings”. It is a fitting partnership.

The AK Marvelous team had emerged triumphant in the national stage of tournament beating 35 other teams in the country to represent Nigeria in Brazil. Across the world, over 100,000 players from 40 countries had competed to be at the finals.

The tournament is a very entertaining change from what the average football fan might be used to. Each game ran for only 10 minutes or ended when five goals had been scored. No goalkeeper is allowed. When a goal is scored, a player from conceding team must leave the pitch. Each team has five players and is allowed two substitutes. Yet, it was clear in Sao Paulo that no matter what surface, no matter what the rules are, football inspires the same amount of emotions: a lot. Playing across a surface that would otherwise be a quarter of a regular sized football pitch and for only ten minutes, players were as passionate, driven and hungry for victory as they would be on a bigger stage.

As such, the tournament was rich in highlights. It felt like a model United Nations of football, featuring a diverse group of teams that are not seen often in international tournaments like Georgia, Qatar, Kuwait or Mauritius. It produced refreshing David v. Goliath results that might be unlikely in professional football competitions (Panama 5 v. England 1 // Hungary 5 v. Brazil 0) It reflected where the world is or should be going in terms of integration and diversity. Qatar’s team for instance was entirely made up of non-indigenes from Mali. The Japenese team had a half-Dutch player. The English team had two Nigerian players. In other cases, the make-up of the team was striking in ways that had nothing to do with dual nationalities. The Oman team, for instance was made of family members: uncles and cousins.

The Ibadan-based Nigerian team, not to be left out, also, had a compelling story. As recent history goes, Ibadan is no longer known for producing top footballing talent in the country. Its most successful team, Shooting Stars FC last won the Nigerian Premier League in 1998. Yet the AK Marvelous team defeated better fancied teams from Lagos and Port Harcourt. The team was created from the genius of their coach, Mr. Akeem Moshood.

He registered for the competition and assembled the team through selections he made himself and word of mouth, through other footballers’ contacts. Before the Red Bull Neymar Jr competition, the seven-man strong team had never played together. The coach made champions out of them anyway. What they lacked in harmony initially, they made up for in determination

“The manager seemed like someone that wanted to help nurture young footballers. I was fasting the day I was called up to come join the team. We had practise the same day. I had already trained in the morning and I needed to conserve my strength,” Olagoke recalled.

“After the call, I didn’t care I had to leave immediately to join the team to train and play. It was not hard settling in.”

Outside of AK Marvelous, all seven men play for different amateur teams and football academies in Ibadan, staying fit and keeping ready for a golden opportunity to show their talents on the global stage. The Red Bull Neymar Jr. tournament was the perfect chance.

When it was time for the final group game against Brazil, the team was sufficiently amped up. Their game had invited considerable attention. The games in the tournament was played simultaneously across three courts but Court 2, most central is where most spectators were focused on. Perhaps the spectators also knew about the footballing history between Nigeria and Brazil, because they soon gathered from the other courts in large numbers. The referee blew the whistle for kick-off.

The Nigerian team seemed to have decided to invite pressure from the Brazilian attack, wait for an opening and then counter attack. The decision bore fruit after three minutes. One goal for Nigeria, one Brazilian player off. Cheers echoed around the stands. There was apparently no love for the home team. In seven minutes, AK Marvelous scored four more unreplied goals, defeating the “best technical” team in the competition, 5-0.

Soon after, they had to play against Kuwait in a play off round after finishing second in their group. They lost and exited the competition. But they do not think they lost at all.

“Travelling to Brazil to represent your country is very big,” Olagoke said matter-of-factly. And it is. While there they also got to meet their football idol, Neymar; and players from other countries bonding over the beautiful game they love. There were many opportunities to be inspired by the sheer talent on display, accomplishments, pride, the game can bring, which AK Marvelous fully took advantage of.

And that too, Olagoke reckons, is a kind of victory.

…The writer was in Brazil at the invitation of tournament organisers Red Bull.