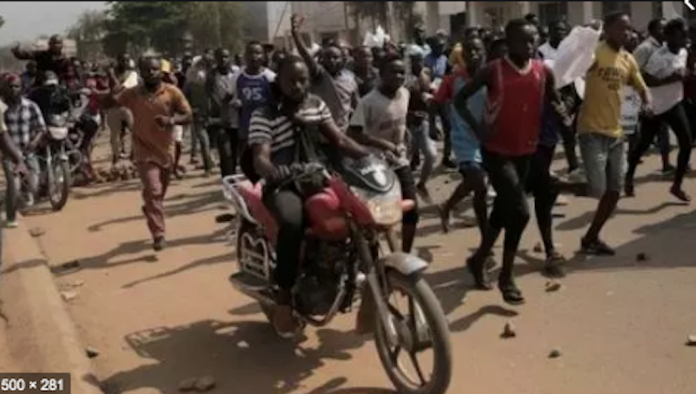 Students of the Ekiti State University (EKSU), Ado Ekiti, on Wednesday trooped to the streets to protest alleged harassment and arrest of their colleagues by operatives of the Economic and Financial Crimes Commission (EFCC).

They appealed to the EFCC acting Chairman, Mr Ibrahim Magu, to rein in his men, by ordering them to stop harassing innocent students under the guise of being allegedly involved in cybercrime, popularly called ‘yahoo’.

A couple of weeks ago, over 40 youths, some of whom were students of higher institutions, were arrested in Ado Ekiti by EFCC and ferried to Ibadan, Oyo State, for alleged ICT fraud.

The protest affected academic activities, as most of the lecturers and other staff could not access the campus because the students took over and occupied Ado-Ifaki dual carriage way for over two hours.

They blocked the highway thereby causing traffic snarl and long queues of vehicles along that route.

Those travelling outside the state capital and those coming in had to take alternative routes to their respective destinations.

Addressing the students, the Director of Welfare, EKSU Students’ Union Government, Temitope Aladejare, revealed that four of his colleagues were arrested by some policemen on Wednesday.

“They just came to the hostel in front of the EKSU’s main gate and arrested four of our members. Two of the victims were even naked and they were in their rooms when they pounced on them.

“When they came, they introduced themselves as operatives of the EFCC and forcefully bundled the victims into a van and took them to an unknown destination.

“We are calling on authorities of governments to call them to order,” he said.

When contacted to comment on the protest, the EKSU Public Relations Officer, Mr. Bode Olofinmuagun, said he was not on campus and that didn’t have first hand information about the arrest and the protest staged by the students.

But the Police Public Relations Officer, Ekiti State Command, DSP Caleb Ikechukwu, said he could confirm that arrest were made, which triggered the students to embark on the protest.

Ikechukwu added that the police swiftly swung into action to restore orderliness by ensuring the removal of all blockages on the highway for smooth human and vehicular movements.

“I can confirm to you that there was arrest. But the police will continue to be an effective security organisation that will continually work for the peace of our society.

“The students protested and they blocked the major highway and prevented commuters from moving in and out of the state capital. This we will never condone because that road is not within the confine of the university.

“They obstructed vehicular movements for hours, but we have been able to remove those blockages and have restored peace and order around the school premises,” he said.