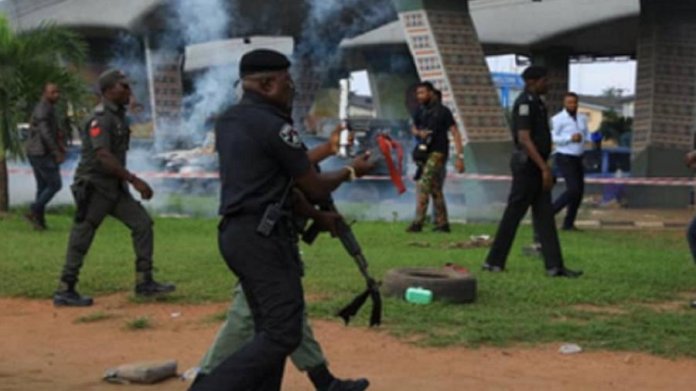 No fewer than 12 persons were arrested by security forces, comprising soldiers and policemen, with some others sustaining various degrees of injuries as police dispersed protesters during the #RevolutionNow protest, which began yesterday in Lagos.
In Abuja, a six-hour rainfall and security lockdown of the Eagle Square and the entry points to the nation’s capital largely affected the march in the city.

But some of the activists defied the rain and marched on the headquarters of the National Human Rights Commission (NHRC) in Abuja, where they condemned the detention of one of the conveners of the protest and publisher of Sahara Reporters, Mr. Omoyele Sowore, and denounced perceived human rights abuses under President Muhammadu Buhari.

But Force Public Relations Officer, Mr. Frank Mba, a Deputy Commissioner of Police, said the march did not hold in Abuja.
However, not deterred by the onslaught, the Lagos organisers of the protest have vowed to continue their peaceful demonstration today.
After regrouping to reassess the situation, the organisers, comprising members of a coalition of civil society bodies, condemned police’s action of shooting live bullets at the crowd, the activists said yesterday.

They said they would converge on the Freedom Park in Ojota today in continuation of the protest.
The protesters had converged on the National Stadium at 7a.m. where they kick started the march to press home their demands for a better Nigeria and the release of Sowore.

Sowore was arrested at the weekend at his residence in Lagos by men from the Department of State Security Service (DSS).
The protesters were just about to hit the streets when they were accosted by a detachment of police at Surulere under bridge at 8.30a.m.
Acting on orders, the policemen upon sighting the protesters, shot sporadically in the air and even fired few shots of at them.
Although the shots made the protesters to scamper to safety, they soon regrouped only to be dispersed again with balls of tear gas sprayed generously into the crowd.

The police also arrested about 12 persons, including a self-acclaimed journalist who had no means of identification.
Speaking with THISDAY, one of the Lagos leaders of the #RevolutionNow movement, Beckley Kofoworola, said: “I don’t understand what is going on in Nigeria.

“We are all exercising our human rights and then the government of the day seems not to understand what democracy is all about. For no reason at all they are firing live ammunition at armless citizens who are carrying out a civic right as allowed by the Nigerian constitution.
“All of the people who are protesting here this morning were unarmed as you can see, but the next thing we saw was the police officers who started shooting at and beating us up. They have arrested not fewer than 12 protesters so far.

“We have taken some of us who sustained gun injuries for treatment. Thank God no life was lost. Some others sustained various degrees of injuries as they were running for safety as well. Some of us are still here hanging around to encourage others to remain resolute and join us in demanding a better country.”

One of the protesters, allegedly shot on the leg, identified as Rilwan Ajayi, is said to be receiving treatment at a private hospital in Lagos.
Reacting to the protest and the subsequent repelling by security forces, one of the protesters, simply identified as peoples’ defender, described it as lunacy on the part of the police.
He said: “How do we describe the uncivilised action of Nigeria Police this morning other than demonstration of lunacy or craziness as Fela put it?

“Shooting live bullets at unarmed civilians exercising their inalienable right to freely express themselves? I narrowly escaped when a bullet was targeted at our midst.
“They later resorted to shooting teargas as decoy to claim they used it to disperse the people.
The policemen went to the extent of chasing people passing by into communities within Shitta Roundabout while shooting sporadically.
“The police should be reminded that people cannot be deterred from fighting for their legitimate rights through coercion.
“The police enjoy improved welfare as a result of struggles of organisations like DSM, UAD and many others. We participated actively in the struggle even before the formation of Movement for Improved Welfare for Nigeria Police Force.

“It is saddening that the police are now working against the interest of the masses. Can we remind the police that the Constitution of the Federal Republic of Nigeria, as amended, is very clear; that any officer or rank and that obeys an unlawful order goes for it.”
When contacted, the state Police Public Relations Officer, Mr. Bala Elkana, a Deputy Superintendent of Police (DSP), debunked allegations that the police shot at the protesters.

He also said they only arrested nine protesters who constituted public nuisance in the name of carrying out a revolution.
“We are very professional in our dealings. The police never shot at anybody. If we had done as they claimed, you would have seen the bodies,” he stated.

In Abuja, a six-hour rainfall and security lockdown of the Eagle Square and the entry points to the nation’s capital largely affected the #RevolutionNow march in Abuja.
However, some of the activists defied the rain and protested at the headquarters of the NHRC.
Also, the DSS was non-committal on whether the agency would charge Sowore to court or set him free.

The downpour, which started about 7a.m, prevented many residents from going about their businesses thus affecting the protest.
The Eagle Square and the Unity Fountain, planned venues of the protest, were locked down, forcing protesters to move to the human rights commission’s office.
Stop-and-search operations were conducted at the entry points to Abuja by combined security agencies while security teams in vehicles patrolled the city.

Speaking during the protest, the Coordinator, Mr. Dare-Atoye Ariyo, said the security situation in the country and mounting human rights abuses were hurting the growth of the nation.
He said: “The ever-growing proclivity of the President Buhari-led regime for human rights abuses is indicative of a complete departure from all democratic tenets, norms and practices.

“We believe that these events are not only undemocratic but they are also disgraceful for a country like Nigeria that practises constitutional democracy.”
He said #RevolutionNow was completely dissatisfied by the eerie silence of the National Human Rights Commission in the face of these undemocratic developments.
“Our dissatisfaction is further aggravated by the fact that the role of the NHRC in defending the constitutionally guaranteed rights of Nigerians is well-revered and dearly treasured by Nigerians,” he said.

Meanwhile, the DSS was non-committal about the next step to take on Sowore yesterday.
Spokesman of the agency, Mr. Peter Afunanya, did not respond to the query but said he was in a meeting when THISDAY contacted him.
But the police’s Mba said the revolution march did not hold in Abuja.
“They only protested at the human rights commission and that was where it ended. The march did not hold in Abuja,” he stated.

Also last night in Abuja, the presidency mocked members of the Global Coalition for Security and Democracy in Nigeria, who had called for nationwide protests of perceived prevalent ills condoned by the Buhari government, saying Nigerians ignored them and went about their businesses.

Celebrating the perceived failure of the call, a presidential spokesman, Malam Garba Shehu, in a statement, titled: “The Winner is Democracy,” said rather than heed the calls for “phantom ‘revolution’,” millions of Nigerians chose to be on government’s side and went about their businesses.

According to the statement, the president was humbled by a show of solidarity for him by millions of such Nigerians, noting that such solidarity was not only for himself or his party but rather for democracy which he said they refused to undermine.

However, he said there were few others, whom he said opted to accede to the calls for revolution by aligning with those seeking to overthrow his government which he said only received the nod to continue through a re-election barely six months ago.

The presidential aide also praised those he described as millions of other Nigerians from various states, political parties, trade unions, civil society organisations and non-governmental organisations (NGOs) whom he said opted to ensure the protection of Nigerian democracy.
He insisted that the group failed to achieve its objective of inciting Nigerians to join the campaign to overthrow the government and rob them of their rights to choose their leaders.

The statement read: “Today, millions of Nigerians went about their businesses: work, seeking employment, attending school/college and caring for their families. By doing so, the millions defended our country’s hard-won democratic rights – by ignoring calls on social media to join a phantom ‘revolution’.”

“There were a few hundred persons today who, for their own reasons, decided to act upon the demands of a group calling itself Global Coalition for Security and Democracy in Nigeria, which went on social media to ask everyday Nigerians to overthrow the government they only elected some six months ago.

“The President is humbled by the support – not for himself, or the governing party – but for the democratic values of modern-day Nigeria through the wisdom of those millions of citizens who preferred democracy and decided not to undermine an elected government.

“Today, joining those millions of Nigerians was not only the President and governing party at Federal level, but many state governments from the opposition, trade unions, civil society organisations, media and NGOs with focus on freedom of speech. All have, rightly, united in protecting Nigeria’s young democracy and the rights of all to elect leaders and lawmakers.
“The Global Coalition for Security and Democracy in Nigeria’s attempt to incite citizens into a revolution against their own democratic rights and interests has failed – as will all attempts to take away from the people their hard-won rights and freedom to choose who leads their country.’’