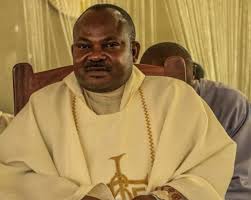 The Enugu State Government yesterday has summoned a crucial meeting with all local vigilante and Neighborhood Watch groups after the Parish Priest of St. James, the Greater Parish, Rev. Fr. Paul Offu, was killed.

The Secretary to the State Government, Prof. Simon Ortuanya disclosed this in a statement yesterday, noting that the meeting will hold at the Government House, Enugu at 1:00 p.m.

Offu was allegedly shot dead by suspected Fulani Herdsmen along Ihe in Awgu Local Government Area of the state. Offu’s murder occurred just five months after the killing of Fr Clement Ugwu, the parish priest of St Mark Catholic Church, also in Enugu State.
Consequent upon Offu’s murders, the angry Catholic priests marched to the Government House with placards, with inscriptions such as ‘enough is enough’, ‘government should rise to defend Nigerians’ and more.

They also matched through the major streets in the state capital to the police headquarters, chanting ‘God save Enugu people from murderous Fulani herdsmen, ‘enough is enough, the government should do something and save us.”
But in a statement yesterday, Ortuanya conveyed the sincere condolences of the state government to Offu’s family and the entire Catholic Diocese of Enugu, over his painful death.

The statement, also, disclosed the planned air surveillance by the Nigerian Air Force (NAF) along Ihe-Agbudu axis, Awgu, Aninri, Nkanu East Local Government Areas and their environs, as part of measures endorsed at the meeting to improve the security of the state.
He, therefore, urged residents of the state not to panic in the course of the exercise, which according to him, was targeted at fishing out criminal elements in the affected areas and beyond.
He maintained that the state government “remains committed to security of lives and property in Enugu State and will continue to sustain the existing peace in the state.”

At a different forum yesterday, the state governor, Mr. Ifeanyi Ugwuanyi commended the Nigerian Air Force (NAF) for its contributions towards the maintenance of peace and security in the state, especially the introduction of air surveillance of the state to enhance the state government’s successes in combating security challenges in the state.

He said the exercise was designed to ensure that the personnel of the NAF remain in the best physical and mental condition to carry out their very crucial responsibility of defending the nation’s territorial integrity was timely and a welcome development.

The governor added that it has been largely responsible for the state’s enviable status as one of the safest and most secure states in the country.

Ugwuanyi, therefore, applauded the Chief of Air Force, Air Marshal S.B Abubakar for sustaining the annual exercise and the laudable role of the NAF in combating insurgency and other security challenges in different parts of the country.

He also thanked and reassured the Air Officer Commanding Ground Training Command, NAF, Enugu, Air Vice Marshal Idi Amin, of the state government’s continued support and assistance towards the success of the Command in particular and the Nigerian Air Force in general.