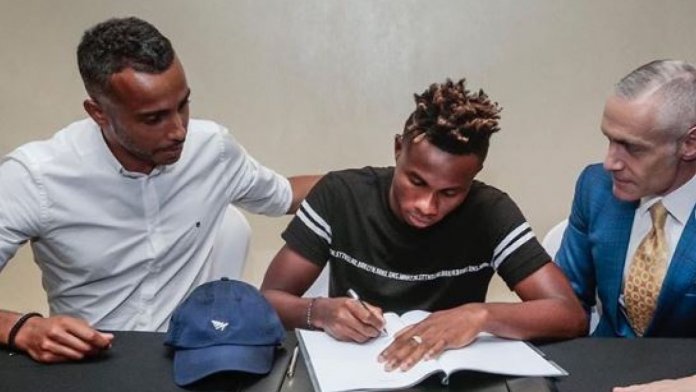 Samuel Chukwueze is arguably Nigeria’s biggest soccer export to Europe. He was recently listed among the top 50 youngsters in Europe. Only on Thursday, the Villarreal of Spain attacker became the second African to associate with Jay-Z’s Roc Nation

The Nigeria international had a breakthrough season in the Spanish LaLiga last season with Villarreal, scoring five goals in 26 games and also featured for the Super Eagles at the 2019 Africa Cup of Nations in Egypt, where he scored a goal in six matches.

Chukwueze is currently on an extended holiday and yet to join his Villarreal teammates for pre-season training after his recent international commitments.

He will be hoping to be back in Javier Calleja’s team ahead of their league opener against Granada on August 17.

On Thursday, the Super Eagles star took to Instagram to announce the good news after inking the deal with the management firm.

‘Excited to announce that with @10manage, we are joining the @rocnationsports family! Big things coming#RocFam’, he wrote.

The American sports management division of Roc Nation will now be managing the affairs of the Villarreal striker, who has been listed among the top 50 youngsters in Europe.

Chukwueze made his Villarreal debut by coming off the bench to replace Nicola Sansone.

Signed from Diamond Academy in the summer of 2017, Chukwueze played in Villarreal’s junior ranks before he was promoted to the reserve team.

The then 19-year-old has featured for the Yellow Submarine in the Europa League, and marked his third appearance in the competition with an assist against Rapid Vienna last year.

Gernot Rohr was clearly impressed with what he saw from the immensely talented left winger.

“Chukwueze has a good left foot, is quick, has a low centre of gravity – which gives him a very good balance – and can deliver and score,” the German coach told KweséESPN then.

He’d become the next standout Golden Eaglets performer to make the step up to the senior side.

Title-winning teammates and individual award winners from the 2015 FIFA U-17 World Cup squad, Victor Osimhen and Kelechi Nwakali beat Chukwueze to making their international bow, as Chukwueze has had to fight back from a near career mishap to get to this stage.

The deal ought to have seen the highly sought-after star, who models his game on Arjen Robben, sign for a top European club, as those before him had done.

Perhaps the only snag hindering a potential move abroad was his age, as the attacker 16, and would have to wait for two years before he could sign professional terms.

Chukwueze’s emergence came as positive news to Nigerian fans, with the national side lacking a naturally left-footed winger since the untimely retirement of Emmanuel Amuneke, who coached the wonderkid in the Eagles’ U-17 and U-20 teams.

Despite his relative inexperience, Rohr identified the starlet’s raw talent and handed him an audition in a team which, for all its outstanding attacking players, lacks a natural left winger to create panic and havoc on opposition defences with direct running, effective crossing and superb technique.