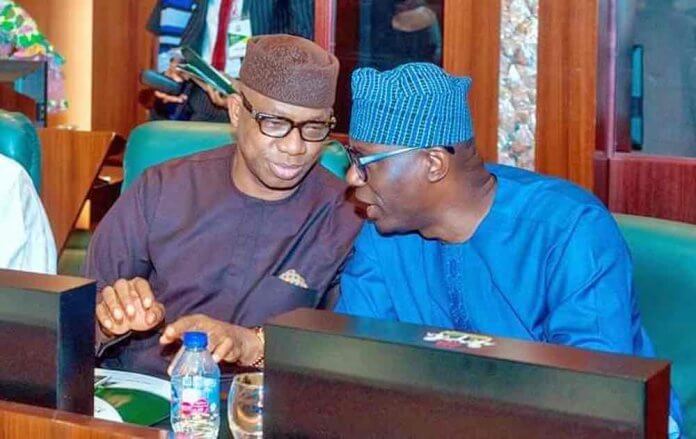 Femi Ogbonnikan writes on the initiatives of both governors Dapo Abiodun and Babajide Sanwo-Olu of Ogun and Lagos states, respectively, to form an integration commission for the sustenance of the economic development and growth of the two states, on account of their proximity

In an egalitarian society, the welfare of the citizenry is central. Ogun State is endowed with both abundant human capital and natural resources for it to be self-sustaining and can rely on these for its socio-economic and cultural development and growth. Aside sharing common borders with the Republic of Benin, its contiguity to Lagos State places it at a vantage position to exploit available opportunities.

In taking cognisance of these advantages that the previous administrations paid lip service to, Governor Abiodun is desirous of harnessing the great opportunities for improved internally generated revenue (IGR) towards sustainable and qualitative governance.

The governor and his Lagos State counterpart, Sanwo-Olu, have initiated a joint development plan, to synergise on how best they can harness the opportunities their states have in common. The planned collaboration is a catalyst for socioeconomic development. Often times, the relationship between Lagos and Ogun is seen  as what New York is to New Jersey in the United States of America. Without mincing words, both states need each other and it is on this note that one of the giant strides both governors have taken is in the establishment of a Commission of Integration to foster socio-economic growth and development of both states.

At a recent engagement with critical business stakeholders at his Okemosan office, Abeokuta, the governor pledged the commitment of the administration to create an enabling environment for businesses to thrive.

“We intend to ensure that, going forward, we focus on creating that enabling environment for people to come here and invest in the state. Before you come here to invest in the state, you will want to see electricity, good roads, security and others. These are the things that anyone coming to invest in Ogun State will want to see.  “We have also decided that we are going to have an improved and indeed an Ogun State Investment Promotion Agency that will be headed by an Investment Banker, not by someone who lacks what it takes to bring investment into the state. Till date, Ogun State has been rated largely for what we call the “push” factor of Lagos. Meaning that people coming to invest in Ogun State are networked to Lagos or perhaps there is no land available in Lagos, that is the “push” factor. We are committed to changing it to a “Pull” factor.

“We appreciate the fact that to keep our vision, which I should remind you, is to have a focused and qualitative governance, while creating an enabling environment for a Public Private Partnership (PPP) sector which we believe is fundamental to the economic growth of this state and individual prosperity.

“To encourage Public Private Partnership (PPP), you must have the right infrastructure. The issue of rural and township road is just a matter of infrastructure. During the last general electioneering campaign, we articulated our vision while touring the entire state. We went into the entire 20 local governments. We had the opportunity to relate with the people and identified with the issues that they have.

“And that allowed us to articulate the vision for ourselves. Our vision is to provide focused and qualitative governance, while creating an enabling environment for PPP. We believe that if we are able to do that, it will translate to the economic transformation of the state. And if the state is economically transformed, there will be prosperity, which is fundamental for the economic growth of the state.” Next to good governance is the issue of security. The governor strongly believes that the most difficult issue, and most disturbing today, is security.

“We are taking it seriously, because we can’t say we are creating an enabling environment, without appreciating its significance. “Ogun state, today, has the largest number of industries in this country, and that is largely, because of our geographical location. And that is why we are called the Gateway State.

“So, Lagos was a capital of this country at a point in time. By the fact of the access to sea port, most of these companies found it convenient to locate in Lagos. The Federal capital was moved to Abuja and Lagos became congested and the next state of reckoning has now become Ogun state.

“We are Gateway State. Lagos/Ibadan expressway passes through our state and with that, we are bordered with other states. We are bordered with the Republic of Benin. And this calls for security challenges. If they chase criminals from Lagos, they will come to Ogun State. We are taking the issue of security seriously, because there is no way we can begin to convince people to come and invest and make it the economic capital or economic hub of this country, if they can’t operate under conditions that can guarantee their peace and safety.

“We are where we are here today, because they (industries) have been pushed out of Lagos. The focus of this administration is to pull a lot into Ogun state. We are going to do that consciously. We have resolved to make Ogun State number one of the ease of doing business index in this country.

“We are rejigging our security trust fund which was in place before, but has got nothing to show for. We are sending the bill to the House of Assembly next week. That bill is an amendment of the initial bill that has existed to allow the new security trust fund to function like it should function, as it is in Lagos.

“We are going to do everything to discourage banditry, cultism, kidnapping to ensure Ogun State is indeed safe for you to live, to work and to establish your presence and industries.

“Next is infrastructure. We are considering roads that connect our adjoining towns and villages to move goods and services with ease and comfort. We are looking at roads that are township roads.”

Without delay, the governor has risen to the occasion and directed the officials of the Ogun State Roads Maintenance Agency (OGROMA) to embark on palliative measures in rehabilitating the abandoned 32 kilometre road linking Sango/Ojodu-Abiodun. The palliative measures are meant to ease both human and vehicular movement of the sprawling adjoining communities, pending when the current raining season will subside and proper rehabilitation would begin in earnest. The Amosun administration awarded the contract for the construction of the road at N12 billion in 2012, but later jerked up to N70 billion with a pledge to build five flyover bridges, but the project was abruptly abandoned midway, having undergone 300 per cent variations in its cost of construction.

“We are going to award Lagos/Epe/Ijebu-Ode road very soon because that road is very important for our people and those coming from the Mid-Western and East parts of the country.

And this would ease the volume of traffic that we are witnessing on Lagos/Ibadan expressway.” 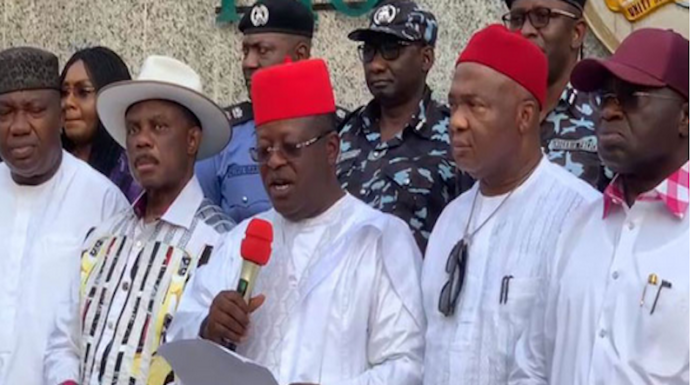