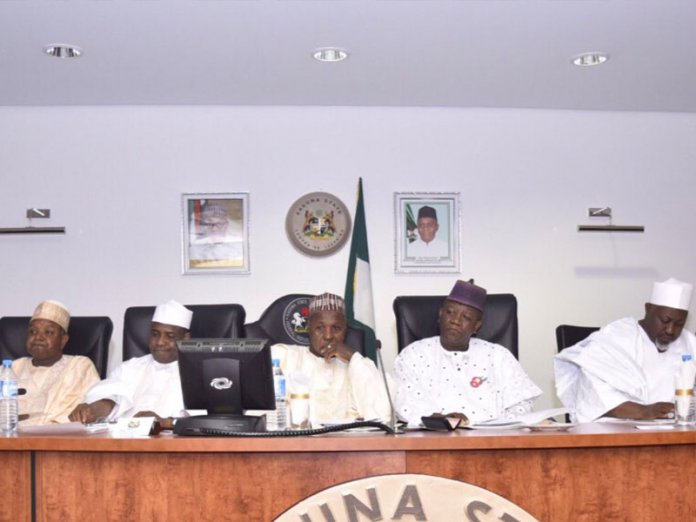 Amnesty is underway for bandits who have unleashed a reign of terror on many of the seven states in the North-west.

Thousands of people have either been kidnapped or killed in the states by non-state actors who have seized control of communities and invaded villages, farmlands.

Worst hit by the insecurity in the region are Zamfara, Katsina, Kaduna and Sokoto states.

Rising from a security meeting Thursday, governors from the zone and the Inspector General of Police (IG), Mr. Mohammed Adamu, resolved to grant amnesty to the bandits to pave the way for dialogue for peace to reign in the region.

Governors at the meeting, held in Katsina, were Mallam Nasir el-Rufai (Kaduna), Hon. Aminu Tambuwal (Sokoto), Abdullahi Umar Ganduje (Kano), Alhaji Mohammed Mattawale (Zamfara), Alhaji Abubakar Atiku Bagudu (Kebbi) and the host, Mallam Aminu Masari.
The governors have also banned the activities of a vigilance group, Volunteers (Yan-sakai), in the region and urged them to surrender all the arms and ammunition in their possession.

They also described the volunteers as illegal group, and admonished them to distance themselves from any security issue in the country.
In a communiqué issued Thursday at the end of a five-hour meeting, which was read by Masari, the governors said they reviewed various steps so far taken at individual state levels with a view to restrategising and improving on them for lasting peace in the region and country at large.

“The meeting resolved that Yan-sakai (Volunteers) should stop their illegal activities. They have no legal backing and the police will arrest volunteers who go about killing and molesting people in the country,” he said.

Masari said the volunteers should surrender all the arms and ammunition in their possession to the authorities and also release all people in their captivity “because we learnt that some people were taken as hostage by both Yan-sakai and bandits.”

“The families should be allowed to be attending market places, worship places and go about their normal activities provided they don’t carry arms into public places. They should conduct their affairs peacefully and leave peacefully.

“In order to further peace and harmony within communities, those who stole animals from communities and people living among them should return them through government or the association of Miyetti Allah. This is necessary because in order to ensure peace and understanding sacrifices must be made by both sides,” he added.

According to him, the governors also resolved to consider dialogue and amnesty for the bandits for peace to reign in the region, stating that only a collective and united approach to the issue of dialogue and amnesty in the North-west could end the menace.
On his part, Adamu said the police would work with the governors in the implementation of the resolutions, adding that nobody is allowed to attack unjustly.

“You are not allowed to kill; so, the Yan-sakai have to be very careful. Never again should they come out and attack anybody because anybody that does that we will pursue that person and make sure we bring such person to book.

“And we now resolved within ourselves that banditry does not pay; those of us in the bush are free to come to town and markets and do whatever business they want to do without any molestation,” he said.

He, however, warned repented bandits against returning to crime, saying: “the freedom given out does not mean that you should continue to do the banditry. If you are not ready to repent and to work within these resolutions it means you want to test the resolve of the states.”
“Our meeting today is the review of what we have been doing for a very long time. Before today, there have been a lot of initiatives within the North-western part of this country on how to cooperate and stop the killings that has taken place between one community and the other,” he added.

He said the approaches so far taken by government and security agencies would end bloodletting and enable farmers, business owners and other citizens to carry out their responsibilities without hindrance.

“And that is why we are here today with other stakeholders to brainstorm and add to the successes that we have achieved so that at the end of the day, other parts of the country will emulate what has been done in the North-western part of this country so that there will be total peace within this country,” Adamu said.

Besides the governors and the IG, the meeting was also attended by commissioners of police of five North-west states, members of Miyetti Allah Cattle Breeders Association of Nigeria (MACBAN) and representative of Niger State governor.

editor - August 4, 2020 2:28 am
10
The relationship between Nigeria and China with regard to loans obtained from the latter to fund Nigeria’s infrastructural projects suddenly became a matter of...