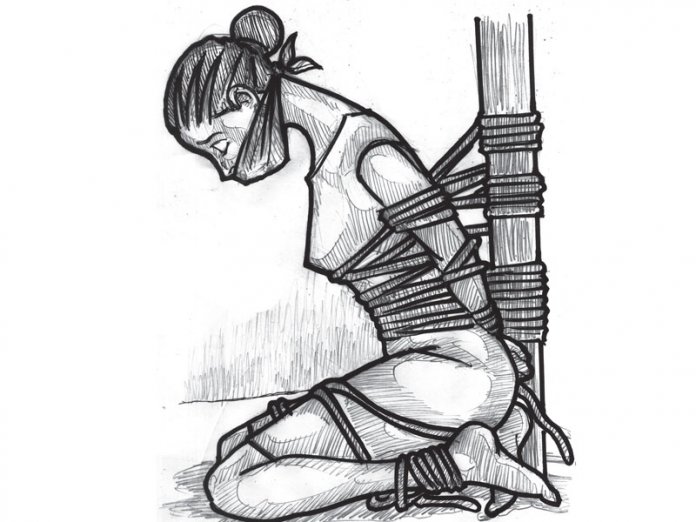 The prevailing poverty is driving the slave trade

While Nigeria is the most populous country on the continent, it also has the odious reputation of hosting the largest number of enslaved people in sub-Sahara Africa. A recent report released by the Global Slavery Index said as much. The survey, conducted in 167 countries across the world by anti-modern slavery organisation, ‘Walk Free Foundation’, revealed that there are 875,500 people living in slavery in Nigeria. According to the survey, slavery in Nigeria takes the form of forced labour in the domestic sector while forced marriages account for the second highest form of slavery in the country.

Indeed, the report merely confirmed what is routinely displayed across the nation. Many Nigerians do not have the luxury of walking free as they live in conditions that are more or less similar to olden day slavery, where they are treated like property—owned, bought and controlled. Many children have no childhoods as they are “lent” out by their parents to “uncles and aunties” or given to “good Samaritans”, some at very tender age and forced to do many degrading things – from being house helps to trading in the streets; while forced marriages are common among the girls.

According to reports, some 45 per cent of girls are married—usually against their will—from age 13 to 18 in the northern part of the country. A 14-year-old girl who rebelled against the practice of forced marriage in Kano State last year confessed to poisoning her 35-year-old husband and three others. “She did it because she was forced by her parents to marry a man she did not love,” Kano State police spokesman said at the time. While that is not a common occurrence, it nonetheless underscores the gravity of the situation.

In the southern part of the country, many of the victims are also women and girls who are usually forced into prostitution and kept by illegal tactics and paid little or nothing. Indeed, human trafficking has become one of the biggest money making businesses after drug trafficking today. Nigeria is not only a transit route for this illegal trade but also a source as well as a destination, especially of the womenfolk. They are also shipped like commodities from the neighbouring countries.

There are proprietors of orphanage homes who are in the business of collecting abandoned babies as well as pregnant teenagers who they then quarter until their delivery time. These unscrupulous people, mostly women, engage in child trafficking under the pretext of running motherless babies’ homes. The situation is compounded by the fact that in our country today, several of those homes are run by unqualified matrons whose only interest is the pecuniary benefits to be made. They take advantage of lax regulations and lack of proper supervision by the relevant government agencies.

However, as the Global Slavery Index report rightly revealed, the underlining reasons for the crime of modern slavery is overwhelming poverty, economic crisis, conflict and environmental disaster. The survey showed for instance that the Boko Haram conflict in the North-east led to an increase of people living in slavery in Nigeria and other neighbouring countries like Chad and Cameroon. It is an open secret that members of the brutal insurgent group routinely kidnap in the north east region women and children who they use as sex slaves and put to forced labour.

However, even if conflicts are curbed, there is also a need for a sustained sensitisation of Nigerians, especially in rural areas, on the dangers posed by ‘good Samaritans’ who offer better lives for children away from the watchful eyes of their parents and guardians. A culture where little children are expected to provide for, or supplement, their family upkeep must be discouraged. We must put a stop to modern day slavery in Nigeria.