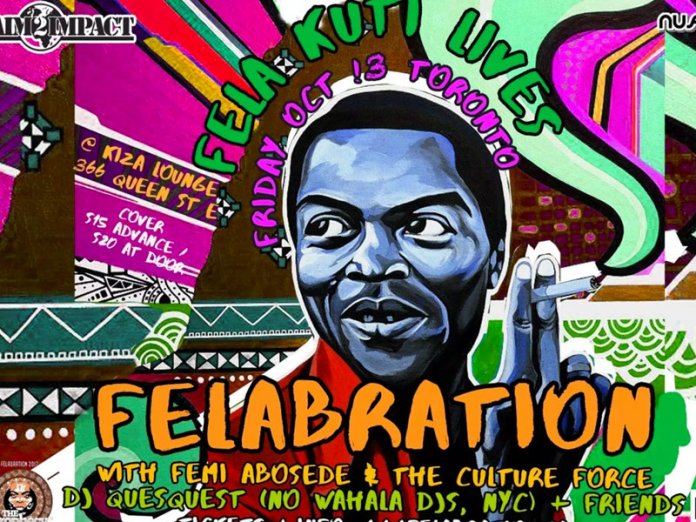 Organisers of the annual week-long festivity to commemorate the life of the Afrobeat legend Fela Anikulapo-Kuti has unveiled plans for its 2019 edition.

Usually held in October, this year’s celebration will run from October 14 to 20 in the city of Lagos which has been its home since inception. As an ode to the capital city of entertainment in the country, this year’s edition is themed ‘From Lagos With Love’.

Lined-up activities that will culminate in the festival are already in full swing. There is the Felabration Art Competition that called for entries in May with the theme ‘Teacher Don’t Teach Me Nonsense, a title of one of the legend’s hit tunes. The call for entry will close on September 15 after which the submitted works will be exhibited in the Kalakuta Museum where a group of judges will determine the top three winning artworks and artists.

These will be unveiled on the opening day of the festival, during the traditional symposium event, ‘The FELA Debates’. Coincidentally, this year’s symposium share same theme with the art competition.

The deciding judges for the competition are Prince Yemisi Shyllon, Mufu Onifade and Sarah Boulos. Legendary Fela’s albums cover designer, Lemi Ghariokwu will be the Special Guest of Honour at the event. The first prize winning artist will be rewarded with N100,000, while the first and second runners-up wins N75,000 and N50,000 respectively.

Also, registration for the Felabration Aerobics Dance Competition kicked off in May and will end on August 31.

This segment of the festival seeks to espouse the ideals of afrobeat dance, which has been described as the origin of what is today called the twerk. Open to both genders, the first, second and third winners will receive a cash prize of N250,000, N150,000 and N75,000 respectively.

As part of its effort to sensitise young people in their teens, to the ideals of Africanism, the Felabration Secondary Schools Debates return this year with a robust theme: ‘Should Persons Above 70 Years of Age Be Allowed To Vie For Political Office?’. Ten secondary schools — five privately-owned and five public schools are in contention for the first prize.

They were the ones who successfully went through the initial hurdles. The names of the ten schools would be released on a later date. Prizes to be won range from computers, laptops, tablets which depict the academia where they belong, to music instruments like keyboards, drums which represent the tools of Fela.