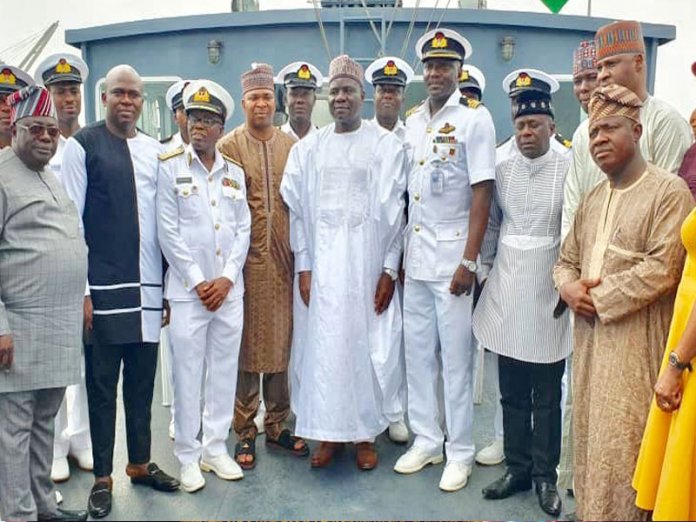 Chiemelie Ezeobi who was recently embedded as part of the Nigerian contingent to Ghana to commemorate the 60th anniversary of their navy, writes that the Nigerian Navy stole the show with its deployment of two ships, NNS KARADUWA and EKULU

Over the years, Nigeria has played the big brother role to so many African nations, little wonder she is often referred to as the ‘Giant of Africa’. In military warfare, it is no different, as the country has continuously led and supported the continent in either its peace keeping role or warfare against external and internal forces.

For the Nigerian Navy (NN), its role extends beyond warfare to port calls, which are diplomatic in nature as it’s tilted towards forging and blending bi-lateral relations between nations.

Recently, the Ghana Navy celebrated its 60th anniversary and the NN deployed two of some of its finest ships; Nigerian Navy Ship (NNS) KARADUWA, the nation’s second indigenously built vessel and NNS EKULU to fly the Nigerian flag on Ghanaian waters. Sailing across the Gulf of Guinea waters, the two ships first made port calls at Sekondi Naval Base on July 22.

So while the Chief of Naval Staff, Vice Admiral Ibok-Ete Ibas was at the International Maritime Defence Exhibition and Conference (IMDEC), in Accra, Ghana, to give his insights on how the Nigerian Navy tackled the myriad challenges on its maritime domain, to the over 500 participants comprising naval chiefs and heads of coast guards, the vessels held forte at sea.

Both vessels captained by Commanders Kennedy Mallum and Andrew Zidon, of Nigerian Navy Ships (NNS) KARADUWA and NNS EKULU respectively, arrived the Sekondi Naval Base Ghana to participate in the 60th anniversary celebrations and were received by senior Ghana Navy (GN) officers led by the Western Naval Command (WNC) Chief Operating Officer at the jetty. The COs of the two NN ships were subsequently briefed on the programme of events lined up for the celebrations.

On the second day, the COs of the NN ships paid a courtesy call on the GN Flag Officer Commanding, WNC, Commodore I Osei- Kuffour, who expressed delight and appreciation to the NN for sending her ships to support their anniversary celebrations. He also called for greater ties between the GN and NN.

Thereafter, the two NN ships hosted a cocktail onboard for the visiting IMDEC participants. The participants hosted included Commander US Naval Forces Europe and Africa, Admiral JG Foggo (US Navy); Commander in Chief of the Brazilian Navy Fleet, Vice Admiral Jose Menezes; Chief of Ivorian Naval Staff; Rear Admiral Aneke (CNS Rep) as well as top brass of the GN and other visiting navies from Europe, America and Africa. Thereafter, the COs and IMDEC participants were hosted to dinner at the Atlantic Hotel in Takoradi.

Other activities included, novelty matches in football and volleyball between the NN and her GH counterparts at the Naval base. Afterwards, NNS EKULU and KARADUWA cast off and departed the Sekondi Navy Base for Tema to participate in other activities lined up for the ships in Accra.

Also, the Nigeria High Commissioner to Ghana, Ambassador Femi Abikoye led some Nigerians living in Ghana on a tour of both vessels.

While intimating the ambassador about the activities already carried out and the general welfare of the ship’s company, Mallum also commended the ambassador for taking out time from his busy schedule to lead the Nigerians in Diaspora to board the vessels.

Afterwards, the entourage boarded NNS EKULU and were received by its CO. Reminiscing over the close ties between both nations, Zidon said: “Nigerian Navy and the Ghanaian Navy share close historical bond. We have so much in common too especially as regards to our customs and tradition, including our progenitor, which is the British Royal Navy.

“So the Nigerian Navy continues to have close ties with Ghanaian Navy especially in regards to training. Personally I was trained in the Ghana Armed Forces Command and Staff College for my Junior Staff Course and it was a fantastic experience.

“I have so many friends and brothers in the Ghana Navy and so for so many of us, it’s like coming home. It’s also similar at the strategic level, the close relationship. So we are here to foster and engender this relationship.”

Earlier, the ambassador said port calls of this nature will go a long way to foster and strengthen the relationships between the two nations.

As both vessels sailed back to Nigeria a day later, one thing was certain, the NN had once again shown it was a naval force worthy of reckoning, not just in Africa but beyond the Gulf of Guinea waters. Little wonder the huge responsibility both the regional navies and international partners often place on the force during each operations or exercises.