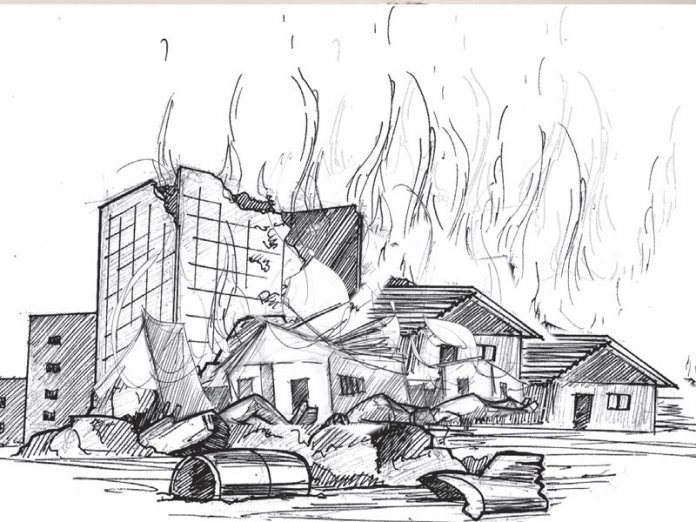 There is need to enforce the country’s building codes

In the past few weeks, especially since the commencement of the rainy season, several buildings had collapsed in our country with fatalities in dozens. This ugly scenario poses a great challenge to those responsible for the regulation of construction of buildings in the country. Last week in Jos, a three-storey residential building collapsed after a torrential rain. This happened a few days after another house collapsed in Lagos. Last March no fewer than 20 people were killed in Lagos when a building housing a nursery and primary school went down.

Several reasons have been adduced for this ugly development, among which are non-adherence to approved plans and the absence of qualified professionals at one or more stages of construction. Other reasons include lack of geo-technical information which is all about obtaining necessary information concerning the soil where a building is to be erected. Even though a one-storey building takes a lot of load, Nigerian builders often embark on construction of multi-storey buildings without carrying out soil investigation, a critical requirement for erection of a solid structure.

Perhaps more fundamental for this increasing menace are unethical dealings between project promoters and the relevant authorities, such as the use of cheap and inferior materials, improper supervision and distortion of original building plans. A 10-year old two-storey building, for instance, had five floors added to it without fortification and approval. So we ask: what do the housing and urban development ministries at the federal and state levels do? When last did officials of these ministries inspect a decrepit building, mark it down for demolition and see to its enforcement?

Corruption, we dare say, is responsible for this as those whose houses may have been slated for demolition often bribe the regulatory officials to look the other way, even when it is obvious that the building is a disaster waiting to happen. According to the Nigerian Society of Structural Engineers, “the construction of a building is expected to be managed by qualified professionals including structural engineers, mechanical engineers, electrical engineers, architects, quantity surveyors,” among others. In an ideal situation where all these professionals are engaged, there are site engineers and inspectors whose duty is to ensure that everything is done in accordance with approved plans and standards, but above all they are expected to pay attention to the use of quality materials.

In other climes buildings don’t just collapse every other day or after a single night of rainfall. Reason being that from the architectural design stage to civil and structural engineering, actual construction and completion of a project, efforts are made to ensure that laid down regulations are strictly adhered to: there are no shortcuts aimed at minimising costs. The failure of the regulating agencies to properly perform their supervisory roles has given way to a situation where quacks have taken over with the effect that some land speculators have also become estate developers and self-styled construction experts all rolled into one.

There is therefore a great need for the enforcement of the nation’s building and construction regulations. There should be adequate sanction for both erring contractors and landlords. A policy should be put in place whereby any professional connected with a collapsed building should forfeit his licence and face the full weight of the law. The land upon which the collapsed building was erected should be forfeited to government and landlord severely punished. Buildings marked for demolition by town planning authorities should be demolished without delay. Unless drastic steps are taken and building codes implemented to the letter, the nation will continue to have these avoidable serial disasters.