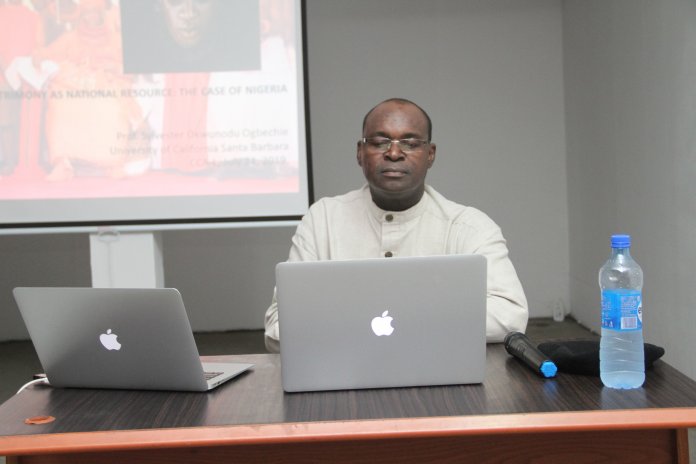 The clamour for the restitution of looted African artworks should also include a global recognition of the right of Africans to the intellectual and cultural property rights of these artworks, Professor Sylvester Ogbechie argues in a recent lecture at the Centre for Contemporary Art, Lagos. Okechukwu Uwaezuoke reports

A lone voice in the wilderness? Perhaps not. Yet, even with his glittering track record as one of the world’s most vociferous advocates for the restitution of African cultural patrimony, Professor Sylvester Okwunodu Ogbechie’s efforts remain unappreciated, if not virtually unnoticed, in Nigeria. Undaunted, the University of California, Santa Barbara-based lecturer recently shared his thoughts with the Lagos art community on this subject. This was during his lecture, titled “Repatriation, Restitution, and Resolutions: African Cultural Patrimony in the Age of New Digital Image Regimes”, which was held on Wednesday, July 24 at the Centre for Contemporary Art, in the mega-city’s mainland neighbourhood of Yaba.

Perhaps, it wouldn’t be inappropriate to see the recent statements credited to the French President Emmanuel Macron on the need to repatriate African cultural patrimony as a glimmer of hope in the horizon for advocates like Ogbechie. Indeed, the respected Nigerian-American art historian welcomed Macron’s request that the conditions for the temporary or permanent restitution of African heritage to Africa be met in the next five years, but added that that was only “part of a bigger issue”. And what would this bigger issue be? “We need a discourse that recognises African ownership of the intellectual property rights of its cultural patrimony, and devise means for the continent to benefit from the value such cultural patrimony generates,” he told the full house of aficionados.

Revisiting the issue of the looted artworks from the ancient Benin Kingdom in February 1897 was inevitable in this discourse. This well-known story of British imperialist plundering of a long-standing African cultural tradition explains the acrimony lurking beneath the clamour for the return of the art works. In a few words, Ogbechie thus refreshed the audience’s memory on this historical travesty: “The British government [was] acting upon requests from the Royal Niger Company to remove the Benin king who was seen as an obstacle to trade. In February 1897, a British force of about twelve hundred men supported by several hundred African auxiliaries besieged Benin City. The British Punitive Expedition, as the colonial force was called, bombarded the city for three days from the Benin port of Ughoton, torched Benin City and looted five hundred year’s worth of bronze, brass and ivory sculptures—national treasure that constituted the royal archive of Benin’s history. Oba Ovonramwen (ruled 1888-1914) was deposed and sent to die in exile and the Benin kingdom was incorporated into the colonial nation of Nigeria.”

Professor Ogbechie also argued that the stolen art works, now dispersed mainly to German ethnographic museums and the British museum, can be used to redefine the economic value of African art in Western museums. If he described the corpus of Benin art in these museums as “the most studied corpus of art from Africa”, it was because there was a prior documentation of all items carted away from the Oba’s palace before they were either shared or sold to museum collections.

“We thus have a good record of their location worldwide,” he disclosed. “The corpus also lends itself to cultural patrimony litigation: the artworks are private property of the Benin kings who spent vast amounts of national funds to import brass from Europe and sustain the Iguneromwon and Igbesamwan – bronze-caster and ivory sculptor guilds that produced these works for Benin kings over the centuries.”

Among these art works was the pendant mask of Iyoba Idia, which was taken from the body of the deposed king Ovonramwen.

Yet, not even the repeated calls for the return of these stolen artefacts, given the circumstances leading to their acquisition, could sway their new Western owners. These continue to arrogate certain rights over the works to themselves. Besides laying down conditions for their return, they subjected the objects to “different display protocols”, which Ogbechie said significantly altered their meanings.

Incalculable is the damage done to the ancient kingdom’s cultural heritage, with its ripple effects continually colouring the perception of what is known in art circles today as Benin art. Professor Ogbechie believes that the fact alone that these works of cultural patrimony remain in Western museums and private collections is a hindrance to the emergence of objects of equal value on the local scene.

“Usually, scholars are quick to deride newer Benin bronze artworks as ‘fakes’ which helps to sustain and increase the value of those Benin bronzes that can be traced back to the 1897 plunder of Benin. In this manner, the initial act of theft and vandalism is used as the primary context for validating the originality of Benin bronze arts in different auctions and museums. Bronze objects produced in Benin since the invasion are therefore prevented from gaining value mainly by being derided as products located outside the corpus of Benin art.”

The vociferous bring-back-the-treasures advocacy inevitably directs the focus towards the economic values of these works, which were plundered from indigenous African cultures. Hence Ogbechie’s assertion: “Recognising the economic aspect of this issue shifts discussion about stolen African cultural patrimony away from abstract moral arguments to the more important argument about the financial impoverishment of Africans resulting from long-term Western looting of African resources.”

But, the destructive effects of jihadist movements in Mali and Northern Nigeria unwittingly played into the hands of those resisting the return of the plundered works. Ditto the proliferation of ignorant evangelical Christian, who routinely demonise these works. Why then would anyone suggest that the art works which the global community had spent millions of dollars protecting be sent to their certain destruction? “The idea that Africans cannot be trusted to safeguard their own cultural heritage has been a fundamental argument of a Western museum oligarchy that essentially controls a global system of cultural valuation bolstered by its horde of artefacts plundered mainly from African and other indigenous peoples across the world,” according to Ogbechie. “The infernal logic of this counter-narrative is a favourite ploy of apologists of the existing museum power structure such as James Cuno, whose arrogant defence of the right of Western museums to keep the loot of their imperial plunder amounts in many ways to crass racism. The defence of the status quo is either based on the idea that might makes right and Western imperialism does not have to account for its past transgressions against African peoples, or that Africans and indigenous peoples everywhere have no right to their bodies or their natural resources. Both claims are morally bankrupt.”

A recently aborted Sotheby’s proposed sale of a looted Benin Idia mask was intended to make the descendants of Lt. Col Sir Henry Lionel Galway richer with as much as 4.5 million British pounds while the descendants of the deposed Oba Ovonramwen, from whose body this hip pendant was taken after his capture by British forces, get nothing.

In Ogbechie’s opinion, two facts rubbish the specious claim that these works are being held in trust for “mankind” by the Western museums. One is the fact that they do not circulate among Africans but are only displayed among these museums and other cultural institutions. Another is the fact that Africans are routinely denied access to them. “Africans require transit visas merely to pass through all Western metropolitan airline hubs (which means essentially paying for the privilege of embarking on a plane in a European international airport). As a matter of fact, there is no Western nation (including the USA) that will grant a Benin person of Nigeria a visa merely to visit the British museum for the purposes of viewing the bronzes, which invalidates their claim of housing the artworks in ‘universal museums’.”

He buttressed the latter with the fact that a group of Nigerians, sent out as a part of an experiment to Western embassies for this purpose, were all denied visas. Apparently, these embassies thought it absurd that that would be their only reason for travelling.

There is also the fact that, in an apparent bid to retain the relics of the British imperial history, its laws forbid repatriation of such works from the British museum.  Hence Ogbechie hotly contests the globalist or universalist notion of indigenous African cultural heritage and the posturing by the Western museums as saviours of these works.

Recent technological developments, which have seen original artworks reproduced through 3D printing, takes the clamour beyond merely return the works. The right of the Africans to the intellectual and cultural property rights of these artworks must also be recognised, Ogbechie insisted.