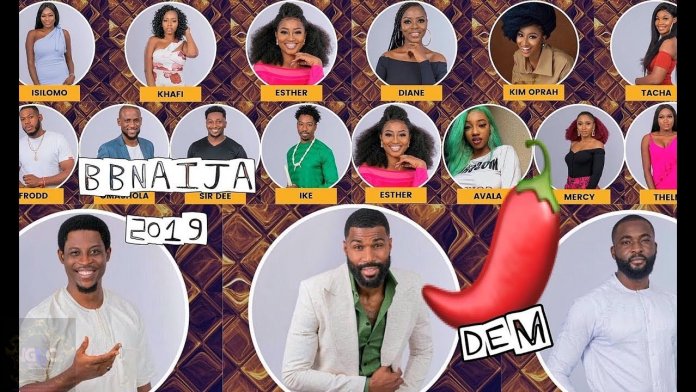 All the 16 ‘Pepper Dem’ gang, including Tacha and Seyi who were in the secret room are up for possible eviction tomorrow. Biggie gave reason for putting up all on the chopping block, saying it was for disobeying house rules amongst other infringements. Khafi who won the veto card for the week was not immune to the situation as her power was ‘redundant’. Ferdinand Ekechukwu reports

DThis weekend the housemates will be treated to great sounds as DJ Kaywise will shake up the dance floor tonight as Ycee set to rock the Sunday night. With DJ Kaywise, it’s going to be a thrilling moment as, at least one of the housemates bid Biggie’s house goodbye. A prominent DJ well known for his street bounce, DJ Kaywise has got a kind of vibe that keeps the audience asking for more anytime he shakes the dance floor with hot Naija songs across board. How best could they have shaken off their nomination worries other than to do it on the dance floor.

After The ‘Back to School’ Task

The housemates went back to school in a refreshing way that won them their wager. Following their back to school task presentation, Esther and Frodd were seen having a mini argument about who left Frodd’s art portrait of Esther. In his words, he kept their portraits together in preparation for the task but Esther only chose to pick up hers. He thought loudly as he narrated the ordeal to Ike later that night.

Afterwards, the relationship between Frodd, Esther and Nelson gets more tangled as Nelson threatens to call Frodd out.

While in the garden, Mike advises Frodd about his lack of sensitivity in his relationship with the ladies. Still in the garden, the Pepper Dem gang expressed their concern about the ‘ships’ in the house, especially the rivalry existing between Frodd and Nelson. Some gave their advice out of genuine love; others saw it as a strategy.

Still on the ‘ships’ and The Love Triangle / Revenge

The goings between Esther and Nelson has left viewers and housemates wondering. Nelson wanted to know his place in her heart, so he said that the earlier they define their ‘ship’ the better. He said it would be better if he quit on time before his feelings became too deep. Esther responded that he was restricting himself, that she wasn’t sure if there was going to be anything serious between them.

With the love triangle literally on the lips of almost everyone in the house, Frodd might have to contend with more housemates than he imagined. In so many ways, Frodd has been let down in his rollercoaster ‘situationship’ with Esther. His love triangle with Esther and Nelson is no news to the house and in turn, Esther has not failed to throw his affection back at his face. Meanwhile, housemates turn lovers, Gedoni and Khafi, have been having good time under the sheets.

What was Ike up to when he told Mike and Mercy that Frodd was playing his game the wrong way? He had earlier promised to help him plan an act of revenge on Esther. We wonder how he planned to do that without ending up ruining what’s left between the duo. With his double-faced act, how honest was his voluntary plan to help Frodd? After their Wager win, Frodd told Ike and Gedoni that now that he knows what she wants, he’s trying to stay away from her.

As he stated his confusion as to her reason for playing himself and Nelson, he told Ike and Gedoni that he wouldn’t mind telling her to steer clear away from him.

According to Frodd, anytime he makes an attempt to stay distant, she always tries to find her way back – which has been evident in their recent cooking time together.

In response, Gedoni advised him to call a meeting with the involved parties and lay down his true feelings in order to sort out the situation at hand. However, Ike wasn’t buying any of Gedoni’s advice as he sternly told Frodd to keep playing the game.
In his words, “Gedoni’s words are too mature for this game; I’ll help you plan an act of revenge instead”. Could this be the final wrecking ball thrown at this possible ship?