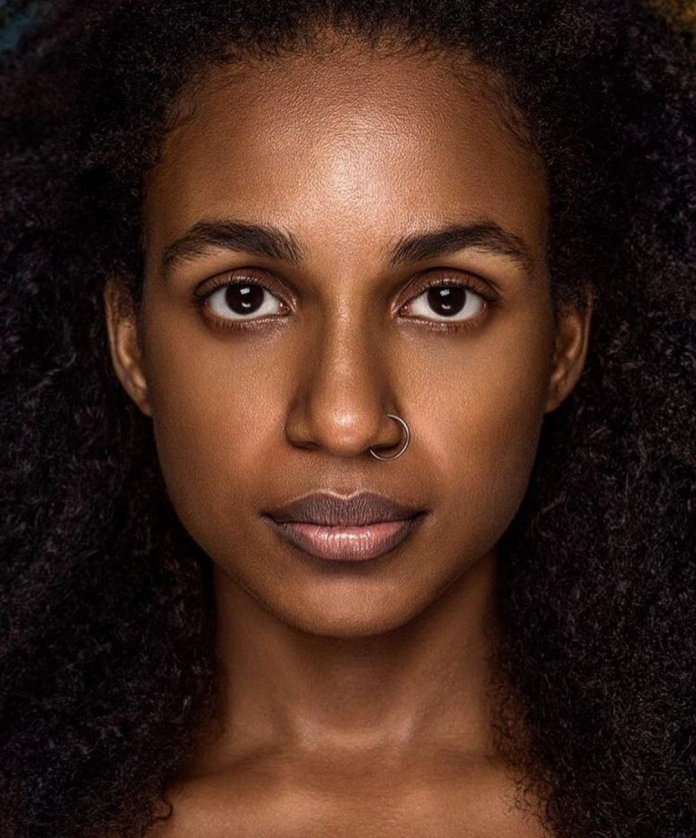 Yagazie Emezi’s ‘HERE’ is a series of photographs of rape survivors at the scene of their non-consensual defilement. Its masterstroke is the ability to create belonging, writes Solomon Elusoji

She was wearing a green-coloured skirt, black sandals and a loose, greyish t-shirt which had Tasmanian scrawled across. On stage, she sounded contemplative, like she was sorting through apples and picking out the best thoughts to show the audience. Sometimes, she was flippant, less eager to speak, more desirous for the people to see and feel the images, so maybe they can take action. Yagazie Emezi believes art can spur people to seek change. That’s why “I want more artists to think consciously about their work,” she said.

The crowd left the auditorium and filed into the lobby of the Mike Adenuga-Alliance Francaise centre; glasses of wine exchanged hands and Emezi moved through bodies, shaking hands, getting hugged and reaching out, too. From the lobby, the crowd moved again, this time to the evening’s centre of attraction – the exhibition room displaying the HERE series, photographs of rape survivors at the scene of their non-consensual defilement.

Emezi, who is a fairly successful photojournalist (her work has appeared in Vogue, the Washington Post), started work on HERE in 2016. Then she partnered the non-profit Stand To End Rape (STER). She had been seeing images of models being made up as rape victims. But “abuse is not something you can dress up,” she said. Sometimes, “you don’t see the bruises, or the sexual violence.” On the other hand, the images of real survivors set them in the shadows and she felt that was pushing the agenda of silence and shame. “It is like saying ‘you should be in the shadows, you should hide your face, you should be ashamed’.” Emezi wanted to create something different and, for three years, she worked with volunteer rape survivors to recreate the scene of, perhaps, their darkest moments.

The exhibition room was well-lit, virtually shadowless, brilliantly illuminating the frames on the wall. Each of the photographs were different, yet the same, featuring a character looking into the camera, stoic, even triumphant. The scenes varied from the kitchen to the bedroom to a car on the street. The crowd lingered, taking it all in. There was a sense of consensus, that it felt familiar – everyone has been in similar scenes; we live and play and work there. And this is HERE’s masterstroke, its ability to create belonging and shine light on darkness. Let there be light and the fear and shame and pain, sizzled away, at least for a while.

Emezi picked up photography in late 2015. “It was really out of necessity,” she told me over a phone call recently, her voice lazy and firm and blissful. “I was working on different creative projects but nothing was coming through. But during that time I had been taking pictures with my phone; my sister suggested that I try to do it professionally. So I gave it a shot.

“I come from a family of storytellers; I’ve tried different ways of storytelling. I tried writing, drawing, videos, so when I came across photography, it was just like ‘oh there you are, I’ve been looking for you’. It was just kind of like when you are walking along the road and you meet an old friend and you guys just continue walking on the road.”

Since 2015, Emezi has documented the impact of education for girls in at-risk communities, the reality of climate change in Nigeria and explored how trauma survivors, outside the narrative of violence and abuse, adapt to their new bodies. She has been commissioned by Al-Jazeera, New York Times, Vogue, Newsweek, Inc. Magazine, TIME, The Guardian, and New York Times Magazine. In 2017, she participated in the World Press Photo Masterclass West Africa and in 2018 was a recipient of the inaugural Creative Bursary Award from Getty Images.

Her images have a certain, authentic feel; she wants to take reality and preserve it. She follows natural light and plays with it, carefully using it to emphasise, to illustrate. But her sense of narrative, of A to B, is her genius. She likes journeys, long, introspective ones filled with mysteries and, sometimes, wonder.

She told the Huffington Post in 2016 that she wanted to document life as it truly is in Nigeria. I asked her, three years after, if she had been able to do that. “Of course not. Lagos alone is a monstrosity of a city when you look at the size and population. But I can confidently say that the miniscule aspect and places that I have found myself in, I have been able to document – places, environment and people – as they truly are. But it would take several lifetimes for everyone to do it, in Lagos, talk less of Nigeria.”

When I asked her how difficult it had been to create HERE, she was flippant. “For me, it’s wasn’t about what kept me going. It wasn’t as if it was an ordeal of work to be done. I wasn’t dragging a heavy ball. It was a necessary aspect of life that I felt needed to be shown through photography.”

Initially, she and the STER team had wanted to get policy makers to attend the exhibition night. “Unfortunately it’s always easier said than done when it comes to inviting key policymakers to come to an exhibition where this sort of discussion is happening,” she said. “Ideally, that would have been the perfect goal. But overall, I think the goal was still met, in terms of the general audience very visibly being impacted by the images. And more than anything, also the panel itself. In my line of work, I don’t go around anticipating any sort of reaction, because I have long known and accepted that everybody is different, so will their emotions. So I just remain open to any sort of feedback and comments that people might have had.”

HERE was exhibited in the middle of the serious allegations against COZA pastor, Biodun Fatoyinbo and Emezi hopes the conversation will not peter away.  “We definitely want the work to travel. We are hoping that different parties will come by and express interest in carrying the work.”

On stage, that exhibition evening, Emezi had noted that in Nigeria, we “use rape as a weapon of war. It is terrifying.” The mood of the panel conversation she had participated in was morose, as Oluwaseun Owosobi and Angel Yinkore and Abiola Akiode-Afolabi discussed the haunting reality of rape in the country.

To end the phone call, I asked Emezi if she still had hope in Nigeria. “That’s all we have to and can be,” she replied. “If you don’t have hope in your country, then why are you in it? You will meet people who say they’ve lost all hope in Nigeria and they don’t care but I think that’s very unfortunate because it leads to a selfish mentality that will never benefit a community or a country. That selfish mentality that I am just going to look out for me, myself and my own. And so we have to remain hopeful and, more than anything we have to continue when we can despite all the horrible things that still happen – we have to maintain a sense of community because Nigeria cannot go forward as a nation if people don’t come together at the end of the day. When that will happen, if that is even possible, I don’t know. But we all have to play our part in our own little way.”

Leicester Crash, May Drop out of Top Four If United Win Today