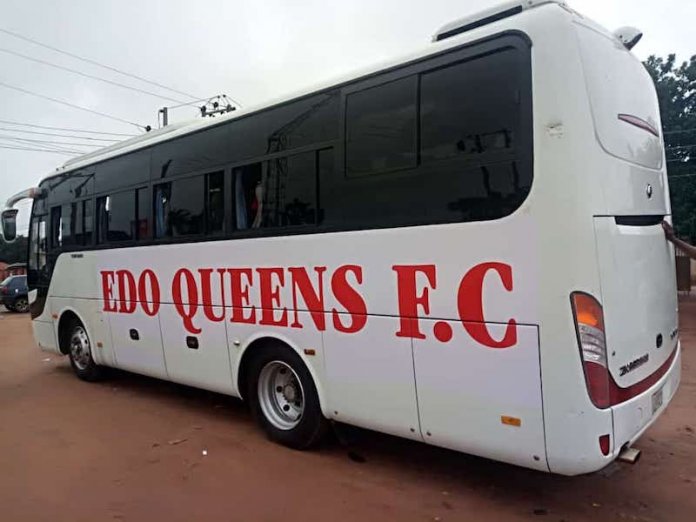 The National Women Football League (NWFL) has thanked Edo State Governor, Godwin Obaseki for lifting the state’s women football team, Edo Queens, who will begin their campaign in the 2018/2019 season today in Lagos.

The NWFL will kick off today in centres across the country with teams drawn in four groups of four teams each.

Speaking ahead of the kick off of the league, NWFL Chairperson, Aisha Falode said the Edo State government has raised the bar in women football development, adding that Edo Queens have become a model other sides should emulate.

Falode, who said that as the chairperson of the NWFL, “players’ welfare and comfort is paramount to our objectives in the NWFL, added that the Edo State government has shown that women football could be as interesting to players as it is to the fans.

“By the timely payment of wages, the health and accident insurance to our girls on and off the pitch, as well as the security provided for the girls, Governor Obaseki has paved a path that other governors should emulate.”

She also thanked Edo State Deputy Governor, Phillip Shaibu for “personally creating the conducive atmosphere for Edo Queens to flourish and excel in the 2019 season.”

Meanwhile, Edo Queens will meet Dream Stars of Lagos in their opening game of the season at the Agege Stadium today.

Edo Queens and Dream Stars are in Group B of the league, which also has Heartland Queens, who will clash with Adamawa Queens FC at the Dan Anyiam Stadium, Owerri.

Other matches today are the Group A fixtures involving Rivers Angels and FC Robo Queens at the Yakubu Gowon Stadium, Port Harcourt and the Osun Babes clash with Delta Queens FC at the Oshogbo Township Stadium.