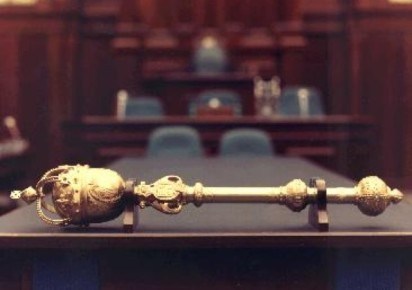 Istifanus Garba It is quite strange that the national leadership of the All Progressive Congress, APC, while addressing journalists is fixated on its posture of brinksmanship in resolving the political crises all over the country. That was precisely what the party did when, at a press conference last Sunday, it insisted that new proclamations must be made, for the Bauchi and Edo States Houses of Assembly. That is to say, the party still did not recognise the elections that produced speakers for these houses of assembly.

Not even the laboured effort to anchor that position as defence of the Constitution would hoodwink anyone into losing sight of the selfish motives responsible for the party leadership’s glaring insensitivity to the dangers of overheating the polity through its actions. In no place is this more eloquently demonstrated than the case of Bauchi State where a duly elected inaugurated assembly is being subjected to severe arm-twisting, some believe at the behest of the APC Chairman, Comrade Adams Oshiomhole, as justification for his running battle with the Governor of his home state, Mr. Godwin Obaseki. If the National Publicity Secretary of the APC, Mallam Lanre Issa-Onilu, was trying to intimidate the Bauchi Assembly members, by bragging about the role of the House of Representatives, in a situation where a state house of assembly is unable to function, he has missed the point.

Or was he trying to drop a hint that the outcome of the investigation of the Sarki Adar House of Reps Committee, into the Bauchi Assembly crisis, was already foreclosed in favour of the APC? Adar has not given that impression. From his demeanour during his visit to Governor Bala Mohammed of Bauchi State, Representative Adar conveyed the impression that his committee would carry out its task in an impartial manner. In return, Governor Mohammed, himself steeped in legislative practices, pledged to abide by the decisions and recommendations of the committee. But that was not without pointing out that the House of Assembly elections carried the stamp of legitimacy against the background that the necessary conditions were all met.

In spite of bare-faced intimidation, the Bauchi State House of Assembly is sitting and carrying out its duties in Bauchi. Only recently, the House approved ten special advisers for the governor and is working on other requests aimed at stabilising the government, for the arduous task of mending the house that the former Governor, Alhaji Mohammed Abubakar, destroyed. In other words, the structures of governance are well in place.

Why would anyone want to disrupt the smooth running of government simply because a favoured candidate did not make it? That is why various patriotic stakeholders in the state are watching with keen interest, to see the report that the Adar Committee will turn in. The general opinion is that if the committee does a dispassionate job, it will have no choice but to maintain the status quo which is, to retain Hon. Suleiman as the Speaker of the Bauchi State House of Assembly because, as Governor Bala Mohammed pointed out, the conditions precedent, to the election of the speaker were fulfilled. First, there was a proclamation. Second, a quorum was formed; in fact, whereas only nine members were required to form a quorum, thirteen were present. The mace, the symbol of authority of the House was present. Fourth, the new Clerk of the House was also in place as the former Clerk left with the old House. Another significant factor is that the three parties that won elections to the House were all represented. That was how Hon.

Abubakar Suleiman emerged as Speaker of the Bauchi State House of Assembly. Is it not intriguing that the APC in Bauchi is viciously up in arms against its own member, simply because the former governor has anointed a candidate who he planned to use to destabilise the Bala Mohammed Administration in the state? Put succinctly, the Mohammed Abubakar factor is what makes the Bauchi situation so complex, to the extent that if the Adar Committee did a thorough forensic investigation, one of its findings would be that the mood in the state is fiercely opposed to a reenactment of the Mohammed Abubakar structure, under any guise, let alone control the state house of assembly of the state by producing the Speaker.

Does the APC need to look any far to understand that the people of the state have no grouse against the party? Any inquisitive person will want to know why majority of the APC legislators and the President were able to win while the Governor lost, in spite of his control of not just the purse of the state but also the party structure. The answer is simple: the dismal performance of his administration which kept 1.3 million school age children out of school, kept the same number out of work, incurred humongous debts with nothing to show and generally induced mass despondency among an erstwhile vibrant and proud populace. As Hon. Adar and members of his Committee would have discovered, the most aggrieved about the Mohammed Abubakar era are the youth whose future did not just look bleak under Abubakar but, to some, irredeemably hopeless. But with Bala Mohammed, they see hope.

They realise they can still recover the years of neglect. So, when, only recently, about 500 of them laid down their arms, it was their own way of expressing confidence in the leadership of Bala Mohammed. Just imagine what will happen, if all gang members and militants in various states of the Federation lay down their arms? The President and every other person can sleep with both eyes closed; the atmosphere will be conducive for investment while the present disquieting instability and insecurity will begin to dissolve.

That is being optimistic. Yet, commonsense dictates that we anticipate various scenarios, not the least being that, should the vestiges of Mohammed Abubakar seize control of the state, hitherto restive youth could resist such a development, the peace that is returning to the state could be shattered, with dire consequences for national security and economic development. Ultimately, like every other state, Bauchi requires sustained stability if the ambitious restoration agenda of Bala Mohammed is to take root. To seek to destabilize the state, under the guise of constitutional oversight of the House of Reps, could be counterproductive. It is reassuring that the Adar Committee had stated its primary objective which was to restore peace and ensure that elected representatives of the people did their work.

To achieve this, the Committee can guide the way away from the winner takes all syndrome which is the bane of Nigerian politics. As it stands, for the ship of the Assembly not to capsize, and for Bauchi to achieve the serene stability absolutely necessary for development, the group loyal to the Speaker should be ready to cede some key positions to Hon. Kawuwa Damina, the factional speaker, and his supporters. That would ensure a win-win situation douse the already charged atmosphere in the state. Istifanus Garba, a native of Tafawa Balewa Local Government of Bauchi State, wrote from Abuja