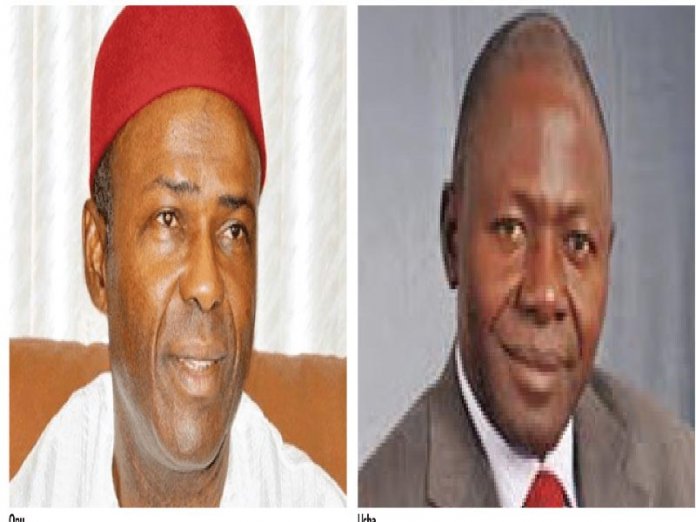 Benjamin Nworie writes on the renewed battle for the control of the All Progressives Congress in Ebonyi state between the former Minister of Science and Technology, Dr. Ogbonnaya Onu and Senator Julius Ucha

This is not the best of time for the Ebonyi born politician and former Minister of Science and Technology, Dr. Ogbonnaya Onu. A new twist in the crisis in Ebonyi All Progressives Congress (APC) centres on political relevance and popularity in the state between the two leaders of APC. Onu and a two term Senator, Julius Ucha are the protagonists in the raging media war over the control of APC in the state. Both leaders have taken to the media to x-ray their political profile and relevance in the game of politics.

In June 2015, the media was awash with information that the former National Chairman of the defunct All Nigerians Peoples Party (ANPP), Onu was tipped as the Secretary to the Government of the Federation. The purveyors of the fake news went further to give time and date of his impending appointment. It was agitated then, for equity and fairness, that the position of the SGF should come to the South-east zone.

The rumour has resurrected again. The appointment of Onu as SGF hit some social media platforms sometime ago. Alas, it was another false alarm. Onu’s home state, Ebonyi reeled in utter bewilderment of the rumour. Many thought that with the current political development in the nation, where the Igbo race has been tactically schemed out of the equation due to poor performance in the 2019 presidential election, that President Muhammadu Buhari may have finally yielded to the agitation for the appointment of an Igbo man or woman to the position of SGF.

To further compound the travails of the former Minister, some people complained that he did not push hard enough to avoid denting his integrity. Others also argued that he is incompetent to manage, control and lead the structure of APC in Ebonyi.

Obviously piqued about what he described as misrepresentation of facts by Onu’s loyalist, Peter Elebe against the political profile of Senator Ucha as published in a national daily, Ucha’s media aide, Engr. Frank Ngwu noted that though Onu had been Governor of the old Abia state and National Chairman of the defunct ANPP, it was not through electoral victory but he was foist on the people by unseen political hands.

He further added that it was not Onu’s participation in the merger arrangement that gave birth to APC neither could the former Minister be credited with any other hard work either in his Ebonyi home state or Nigeria. However, he contended that his appointment came as a result of a meeting of prominent Igbo APC leaders convened in Abuja at Imo Lodge by former Governor Rochas Okorocha where Onu, Senator Chris Ngige and Prof. Anwuka were nominated for any of them to be picked for SGF by President Muhammadu Buhari in 2015.

He said, “a formal letter to that effect was written and endorsed by the five APC state chairmen from the South-east and Okorocha who eventually booked an appointment with Mr. President, went with an Igbo delegation where Okorocha presented the letter containing the list of Onu, Ngige and Anwuka and further pleaded with the President to do anything with the content of the letter.”

Ngwu called on the National leadership of APC to set up a fact finding committee to visit Ebonyi State and conduct popularity test between Ucha and Onu concerning their electoral value to APC presidential election in 2015 and 2019, including other developmental strides in Ebonyi State, South-east and Nigeria.

Another observation is that the “union” that brought Onu and Ucha together in 2011 when Ucha held the governorship ticket of the ANPP under Onu’s national chairmanship was unproductive. The “union” has pitched the two leaders against themselves, with claims and counter claims of sabotage on Ucha’s governorship ambition. It was gathered that Onu wanted to foist his “weak” crony on Ucha as his running mate in 2011 against the choice of the party leaders in the state.

The disagreement that ensued on Onu’s preferred deputy governorship candidate threw ANPP into jeopardy and serious confusion, to the extent that Ucha ran and campaigned vigorously without a known running mate. However, the contest was a battle of titans against the then incumbent, Governor Martin Elechi. Adjudged as the most keenly contested election in the history of the state, Ucha is still ranked as one of the most active party men since he left the PDP in 2010.

Elebe’s outburst that Ucha has no political relevance in the state further exacerbated the battle of supremacy between Onu and Ucha in the state.

Ucha’s aide noted that Elebe’s claim of Onu’s numerous achievements in Ebonyi state is neither here nor there as no Ebonyi indigene can lend credence to that claim. Ngwu insisted that there are numerous achievements of Senator Ucha right from the House of Assembly as a pioneer Speaker and two term Senator. He said that Ucha’s achievements are clear to Nigerians and Ebonyi people.

Ngwu said, “it was Senator Julius Ucha that brought momentum to opposition in Ebonyi in 2011. This principled politician, who has the enviable record of being the first Ebonyian to serve two terms in the Senate, did what no other politician could do. Ucha has remained an accomplished parliamentarian.

Ngwu added, “For instance, it is on record that without consulting the governorship candidate (Sen. Ucha), Dr. Onu nominated and forwarded the name of one Sunday Nwaji, from Ugwulangwu as Ucha’s running mate. That explains why Senator Ucha ran the election without even as much as a photograph of any running mate in his campaign posters”.

“Also in 2011, Dr. Onu’s ward Obiozara, ANPP scored 1180, while in the entire Ohaozara L.G.A, ANPP polled 5,764 votes compared to 15,152 polled by the PDP. But in Ucha’s Ezzagu Ward 2 (Nkomoro), ANPP scored 6,215 and 17,095 in Ishielu L.G.A . In 2011, through Ucha’s popularity, ANPP won one House of Representatives position and two constituencies in the State House of Assembly with non coming from Ogbonnaya Onu’s LGA or his entire zone.”

Owing to Onu’s unpopularity and fear of going to the field for any electoral process in the state, the APC 2018 state congress committee was allegedly cornered to Onu’s house in Uburu before they proceeded to a hotel in Enugu, where, names of ward, local government executives were allegedly prepared by Onu’s cronies and handed over to the panel.

Unfortunately, an insider explained that on the day of the main congress based on the time table and venue of the state congress issued to INEC, no member of Onu’s faction appeared at the venue neither did they participate because they had written the results, while Ucha’s people were said to be at the venue manned by security agencies and INEC officials.

The APC became factionalized and operated two state secretariats. Ucha’s group retained the main secretariat while the Onu faction was quartered at the former Labour Party office along Abakaliki-Enugu Expressway and later relocated to Afikpo Road.

Adjudicating on a matter before him, the Justice Anslem Nwaigwe declared that the state congress conducted at Nkwegu Ugbala Grand Arena, a private property of Edward Nkwegu was not validly conducted same being in contravention of the party guidelines and violation of the Electoral Act, which was also not monitored by the INEC.

Since then, the APC has not agreed on common agenda in the state. The 2019 general election further reopened the bad running water between the two camps.